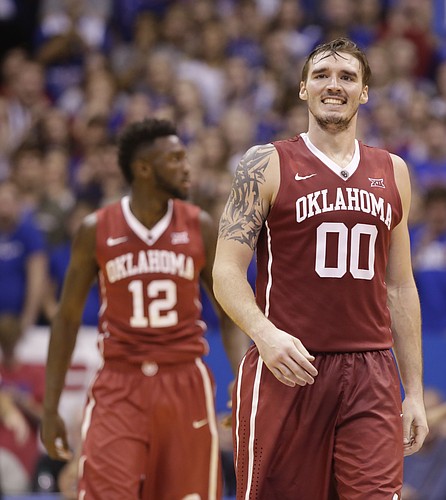 Oklahoma forward Ryan Spangler (00) grimaces after picking up a foul during the second half, Monday, Jan. 4, 2016 at Allen Fieldhouse. by Nick Krug

Only in the Big 12 — in 2016 — can a team that just defended its home court against one of the hottest teams in the country on Saturday, head north on Monday night as the No. 1 ranked team in the nation and lose to a team it had already beaten this season.

That's exactly what happened to Oklahoma on Monday night in Ames, Iowa, where the Cyclones picked up their most signature victory under their new head coach in an 82-77, Big Monday victory over the top-ranked Sooners on the same day OU moved into the No. 1 spot in the polls. This, two days after OU outlasted soon-to-be-No.6 West Virginia, four days after the Mountaineers handed then-top-ranked Kansas (now No. 3, for now) its most humbling loss of the season.

And, wait, there has to be another 10 or so just like them still to go before a champion is crowned and the postseason tournament rolls around.

Following the OU-ISU game on Monday night, — already the second meeting between these two conference giants — I couldn't help but think how what the Sooners already have been through in Big 12 play represent a great look at just how deep, talented and dangerous the conference is this year.

Jan. 2 – vs. No. 11 Iowa State – Sooners trail at a couple of different points in the second half but dig deep to win to set up a No. 1 vs. No. 2 battle with Kansas two nights later.

Jan. 4 – at No. 1 Kansas – Triple-overtime thriller, which went to Kansas, 109-106, figures to go down as the game of the year in college basketball and was one of the best games ever played at Allen Fieldhouse. OU guard Buddy Hield was sensational in scoring 46 points against the Jayhawks.

Jan. 13 — at Oklahoma State — Bedlam turned out to be exactly that, as the Sooners survived a last-second three-pointer and 42 points from freshman Juwan Evans to win 74-72. After two sensational offensive games, Hield finished with 26 but also turned it over a whopping 10 times, including the near fatal give-away in the final seconds.

Jan. 16 — vs. No. 10 West Virginia — West Virginia and its scrappy, pressing defense limited Hield to 17 points and the Sooners needed a tip-in at the buzzer from Khadeem Latin to come away with a hard-fought, two-point home victory. This win, from the KU perspective, was enormous because had the Mountaineers found a way to eek it out, they would quickly have become a serious contender to end KU's streak of 11 straight Big 12 regular season titles.

Jan. 18 — at No. 19 Iowa State — OU got 27 from Hield and 26 more from Isaiah Cousins, but the Cyclones, eyeing revenge, saw three players top the 20-point mark and used a rocking Hilton Coliseum to knock off the top-ranked Sooners.

So there the Sooners sit, after what only can be described as six killer conference games, with a 4-2 Big 12 record and a point differential in those six games of plus-10. That's 2.5 points per win, which

Other than using this OU stretch as an obvious indicator that life in the Big 12 is serious business, it also tells me something else — if the Jayhawks hope to make it 12 in a row they better bring their best every night, because (a) every team in the conference is going to be gunning for them and every team in the conference is now talented enough to beat them on any given night, and (b) the Sooners already have made it through some of the toughest games on their conference schedule.

Including a Feb. 9 home game against KU, OU has a largely favorable second-half Big 12 schedule that could make hoping for others to help KU at the top of the standings by knocking off the Sooners a