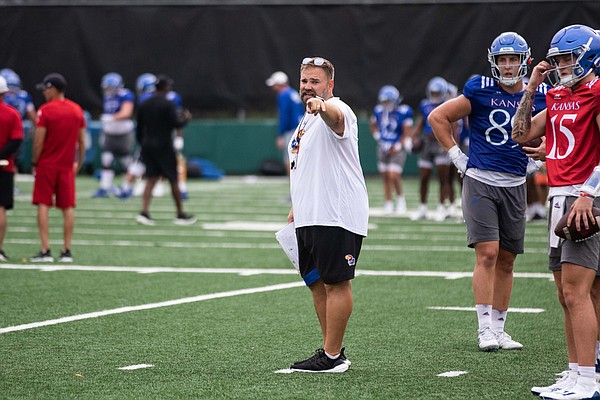 KU offensive coordinator Andy Kotelnicki calls out directions to the offense during practice on Aug. 4, 2022. by Chance Parker/Journal-World photo

The goal for many of the players who come through the Kansas football program, and others throughout the country, is to one day wind up playing snaps in the NFL.

Getting there is no easy task, though, and can require as much good luck and timing as talent.

There are ways for players to help position themselves in the best possible situation, of course, and KU offensive coordinator Andy Kotelnicki has made sure to emphasize that with every group he’s coached in the past 10-15 years.

“I show all the offensive skill players a graph, a chart, every year to start camp,” Kotelnicki said. “And it’s the highest played players in the NFL.”

The non-quarterbacks on the list include players like Kansas City Chiefs tight end Travis Kelce, Las Vegas Raiders wideout Davante Adams, New Orleans Saints running back Alvin Kamara and dozens more. But it’s not their names or even the stats they produce that landed them on the list. Each year, Kotelnicki explains why and shows his players how those superstars got there.

“It’s usually between 80 to 90% (of the time) that those guys aren’t getting targeted or touching the ball,” Kotelnicki said. “So I explain to them (that) there's some individuals that are making 30-some-million dollars a year to play this game and they were only getting the ball 10 to 15% of the time.”

While that sounds like a pretty good way to make a living, the reality behind it also carries a message that Kotelnicki believes is critical to both building a program and sustaining success.

“Everyone has to learn how to play football when they don’t have the ball,” he said.

And while he stopped short of calling this collection of skill players the best he’s been around, Kotelnicki did say that KU’s crew has a chance to be “a special group.”

“I think we have a lot of unselfish guys,” he said. “You’ll see downfield blocking from the receivers, you see the running backs block or pass protecting. You’ll see them block for each other. You see the tight ends doing both.

“For them to understand that football’s as much about what happens when you don’t have the ball is a big deal.”

This concept is another one of those culture-defining moments. It’s not highly publicized, there’s not a lot of glory or glamour in it. But without players who are willing to buy into it, programs generally don’t get very far.

The 1-0 Jayhawks will travel to West Virginia this weekend to take on the 0-1 Mountaineers at 5 p.m. Saturday on ESPN+ in the Big 12 opener for both teams.

KU wide receiver Quentin Skinner on the challenge at WVU & what he wants to see from the Jayhawks… by KUsports.com

Kansas RB Sevion Morrison on what ball control can do for the Jayhawks… by KUsports.com

KU D-Lineman Caleb Taylor on what stands out about the West Virginia offense by KUsports.com