In Jalon Daniels, KU has a quarterback again and it's not just his play that illustrates that 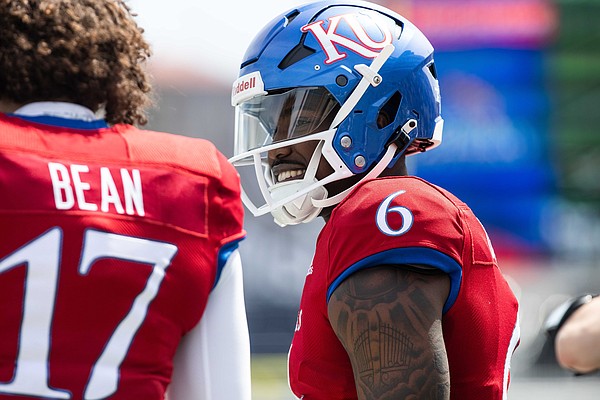 So, Kansas quarterback Jalon Daniels was on SportsCenter the other night, talking about his game, the Jayhawks’ 4-0 start and all things Kansas football.

My how fast things can change.

I’ve been doing this long enough to remember a time when former Kansas quarterback Todd Reesing used to come to every media availability opportunity and disappear into a circle of huddling cameras and recorders.

I was young back then, still covering high schools for the paper, but I wanted to be there every Tuesday to get a taste of what it was like to cover Kansas football.

That often led to me writing about much less important angles or shagging quotes for the beat writer at the time. But it was cool to be there all the same, and I can’t tell you how many Tuesdays came and went where I never even saw Reesing even though he was there.

That memory — and others like it — was my first of covering Kansas football, and in the decade that followed it took a downturn in a big way.

No matter how bad it got, the quarterbacks always seemed to draw the most attention, but sometimes that attention was limited to two or three reporters around the starting QB at a time. Other times, the QB didn’t come at all that week, either because he wasn’t requested or because he wasn’t made available.

The list of names is too long to write here. But if you’re reading this you probably remember a lot of those guys.

That’s not a knock on any of them, more a commentary on just how far things fell for the Kansas football program.

Fast-forward to today and things are drastically different. Daniels shows up to meet with the media every Tuesday, and he often walks into the room straight off the practice field and with the same kind of strut and swagger that he carries on gamedays.

In fact, Daniels is the only player on the roster who regularly gets his own time at the podium. There are a couple of reasons for that.

First, the interest in talking to him is too great to spread him around the room in the breakout sessions, so it’s easier for them to put him up front and let him field questions from everyone in the room until the questions run out.

Second, this stuff is all recorded via video and put on KU’s website these days. We were putting video on our site back in the Reesing era, but not everyone followed suit and video clips and watching full press conferences was not as prominent then as it is today. Not even close.

So there Daniels sits in the front of the room, head held high, smile beaming, ready to answer whatever questions come his way. You don’t have to worry about not seeing him because of a horde of people around him. He’s up there, front and center, smiling for the cameras and representing the program off the field the way he does on the field.

Who knows where Daniels is headed from here. He wants to play in the NFL. He’s been mentioned as a legitimate Heisman Trophy candidate. And he’s still got eligibility at Kansas, both today and beyond. He also still has eight games remaining this season and is hoping to lead the Jayhawks to even greater heights than this 4-0 start.

Regardless of how that goes, though, you can expect to see him dutifully making his weekly media appearance inside Mrkonic Auditorium at the Anderson Family Football Complex, talking about the team’s successes, shortcomings and next opponent.

After all, that’s what quarterbacks do. And Kansas is in the game again.

In case you missed Zac Boyer’s preseason story about Daniels’ work in the offseason, that link is below, along with a few other recent features on JD6 from around the country:

• Boyer talked to Daniels’ LA-based QB coach Sam Fisher about how he could learn and grow at Kansas.

• This one, from Brady McCullough in the LA Times, looks at Daniels’ path to Kansas.

• This one looks at Iowa State coach Matt Campbell’s thoughts on Daniels and the Kansas offense.

• Daniels has become a fixture in all kinds of Heisman Trophy watch lists and is a legitimate contender to stay in the race for the iconic trophy.

Great article about your early days around KU football.

It has been a long wait for a good football team and you put it in perspective in this fabulous story.