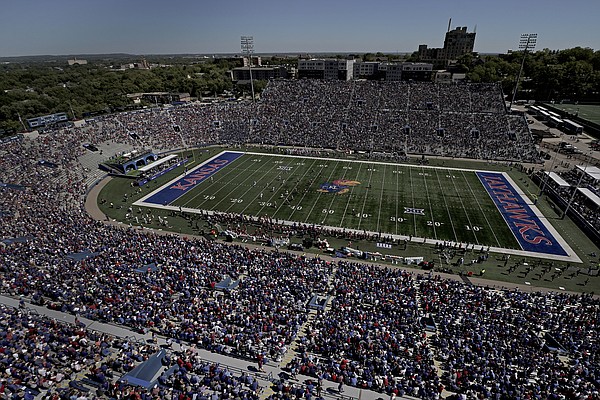 Fans watch during the second half of an NCAA college football game between Kansas and Duke Saturday, Sept. 24, 2022, in Lawrence, Kan. Kansas won 35-27. (AP Photo/Charlie Riedel)

It’s truly amazing what an incredible opportunity this Kansas football team has in front of it after a 4-0 start to the 2022 season.

For years, as Memorial Stadium sat mostly empty on game days, we heard people say, “If you give the fans something to watch, they’ll show up to watch it.”

And the fans did exactly that last weekend for KU’s 35-27 win over Duke.

A sellout crowd of more than 47,000 filled KU’s home stadium on a perfect fall Saturday, and now the Jayhawks get two more home games in a row to try to capitalize on that momentum.

While filling the stadium again — and then again — no doubt will be the goal for the upcoming Big 12 battles with Iowa State and TCU, we’ve reached the point — already! — where it’s almost expected.

This fan base is so into this football program right now and the buzz seems to be growing by the day.

Everyone had fun last week, so there’s no reason to think that DBKMS won’t be sold out this weekend, when the Jayhawks take on Iowa State at 2:30 p.m.

But let’s say for a second that KU actually loses to the Cyclones. Normally, that might trigger the end of the ride and cause people to jump off the bandwagon as quickly as they hopped onto it. But I don’t get that sense today.

If KU were to lose on Saturday, I think the fans would feel an obligation and an excitement about showing up the following week to help make sure that the Jayhawks beat TCU and get back on track.

That, my friends, is full-on culture change. And I don’t care how invested you are in it or how much you think it’s here for good, do not take it for granted.

We’ve seen what happens when that occurs.

Besides, the support of the home fans means the world to these guys and it fuels their confidence and performance, as well.

Just listen to what a few of the Jayhawks had to say about last Saturday’s packed house after the win over Duke.

“It makes the day go great and awesome because we see the love in the stadium and we all see that everybody appreciates what coach Leipold’s doing,” Lonnie Phelps Jr. said. “It was most definitely a difference.”

“It was surprising to see that (before kickoff), but when I saw it, I just locked back in,” defensive back Mello Dotson said of his first look at the crowd after taking the field. “I was happy everybody came out like that, though.”

And quarterback Jalon Daniels could not contain his smile when he talked about being 4-0 and feeling the love from the fans in the stands.

All of this — from improved play and coaching to execution on the field and support in the stands — has played a key role in KU’s fast start.

And it goes beyond what’s happening on Saturdays.

“The fans show so much love,” Phelps said. “Even when we hit 3-0, there was a lot of (excitement) on campus and the football players here can actually feel good about walking to class and getting dapped up by people who say good job.”

Just because that’s here now, though, does not mean the Jayhawks plan on getting complacent or changing a thing about how they prepare and play.

Really, really happy for the guys who have been in this program for four and five years. To see all of that hard work and commitment actually bear fruit must be incredibly rewarding. They've earned a little love. RCJHK!

In the mathematical world, the KU attendance leap can best be described as a "step change function"!

It is truly amazing how KU winning has immediately resulted in sell out crowds at DBKMS.

To borrow a Yogi-ism, "nobody goes there anymore, it's too crowded"!

Getting there and back again from KC via K-10 was a nightmare with all the road work. I'm definitely taking I-70 next time.

No complacency. Where does KU go from here?

To the film room to watch our mistakes and correct them. Lonnie Phelps

Have we seen any news about a potential sell-out for the Iowa State game this weekend? Would be great to build on last week and have back to back sell-outs.

Why don't we just get bowl eligibility out of the way, over these next two home games - whaddya say?

A couple of big time Wedding planners out of KC could show you how things need to be done quickly...that is their world...big crowds...problem solving....actually Bookers' job should be held by a former Wedding planner ....another head scratcher......just an opinion...thats all.

A wedding with 50k? And double the expected in little over a month?

The turnaround by the team is phenomenal, but the responsiveness by the whole department is pretty crazy good.

The responsiveness by the Jayhawk community has been crazy good as well. Hopefully it continues so that we can get a new facility.