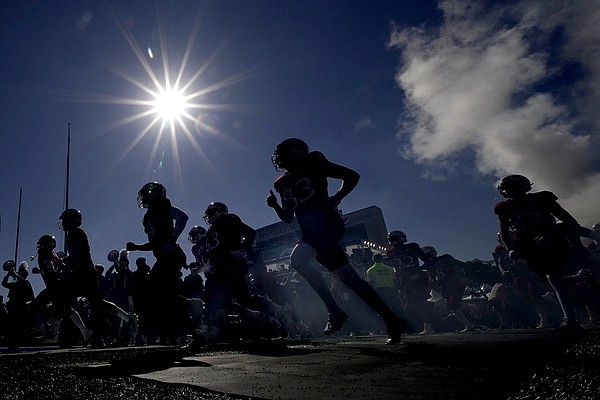 The Big 12 Conference on Monday announced the start times for the Oct. 2 conference slate, and Kansas’ home game against TCU is scheduled to kick off at 11 a.m. on FS1.

The first words out of almost any Kansas fan’s mouth when they see yet another 11 a.m. kickoff announced is that the program is being punished with another early start.

You can’t just look at the 11 a.m. kickoff time for Kansas and say that’s a game nobody wants to watch or will see. I’d much rather be penciled into the 11 a.m. slot every weekend than a 9 or 10 p.m. kickoff like many of the Pac-12 teams and others out west have to endure year after year.

Think about it. 11 a.m. in Kansas is noon on the east coast and 10 a.m. in the Mountain time zone. That’s wake up, flip on the TV and watch some football. As the day goes on, activities pop up, obligations arise and sometimes people would rather just be out and about in the evenings and at night rather than wearing their sweats and watching football.

So, if it’s a lack of eyeballs on your product thing that irks you, I’m not sure that holds up here.

If it’s a missed opportunity to have a killer tailgate, I’m a little more sympathetic to that. But I don’t think the 11 a.m. starts need to have the negative association they currently do.

Now, back to the reason. It’s also important to note that deciding whether than 11 a.m. slot is actually disrespectful or not actually depends a lot on what the rest of the day’s slate looks like.

Sometimes, conference officials, university ADs and head football coaches actually prefer the 11 a.m. slot because they’d rather be the better game on a list that lacks excitement than go head to head with the college football powerhouses in the later slots.

• No. 20 Arkansas at Mississippi State

• No. 4 Michigan at Indiana

• No. 3 Ohio State at Michigan State

• Texas Tech at No. 9 Oklahoma State

• South Carolina at No. 7 Kentucky

The night slot has some serious firepower, with two SEC showdowns and a ranked BYU team taking on the Notre Dame brand. You could argue that KU belongs in that slot instead of the KSU-ISU game, but I think the expectation there is that Wildcats-Cyclones will be a better game. And, at least right now, one of those two teams is ranked, while neither KU nor TCU are.

The afternoon slot is also pretty massive, with both No. 1 Georgia and No. 3 Ohio State in there, along with a key Big 12 game featuring a top-10 OSU program.

In the morning slot, you’re going up against OU-Texas, but no one outside of Michigan fans is going to want to watch the Wolverines pummel Indiana and the two SEC games at 11 are not nearly as big time as the nighttime or afternoon SEC matchups.

So, if it’s me, and I’m looking for eyeballs and exposure, I’d rather be the 11 a.m. game that week.

If it’s fighting off a Friday night hangover or getting squeezed on some fun tailgating time, I understand that and I feel for ya.

But that has nothing to do with KU getting or not getting respect. That’s all about you managing your party schedule. And the way this thing’s going, whatever you miss out on Friday night or Saturday morning, you might very well be able to make up for in celebration on Saturday night.

I'd be curious to know how this shifts and priorities adjust for the Big 12 after OuT leave. Lot of variables - new TV deal, different teams, OU/TX not taking the highest priority slots, new schools/new matchups. Will be interesting.

"Think about it. 11 a.m. in Kansas is noon on the east coast and 10 a.m. in the Mountain time zone. That’s wake up, flip on the TV and watch some football. "

Shoot, we are in Pacific time zone. That's a 9am game here. Not a problem. It just means this old retired guy has to set an alarm to make sure I am up in time for the game. Actually, I'm normally up and around by 6 or 6:30 anyhow. I like that 9am time slot for games. Gives me a whole lot of the day after the game to just be retired. :)

Didn't mean to leave you out, Dale. It's just that, as of now, the Big 12 footprint does not include west coast time. As of now. ;-)

No offense taken, Matt. Just pointing out we kind of like the early times even though I have to rise a bit early. Early games free up the rest of the day. Thanks for the reply.

I'm with Dale, out here in Washington State. I don't mind eating eggs while I watch KU on my TV. Used to be I had to spend money at a sports bar and beg the management to dedicate one of their (smaller) monitors to KU. This is better! RCJH!

Matt - In general, I get your point, and actually like the earlier games, though I understand about tailgaters. This week though, I’d much rather be opposite any of the afternoon options instead of the red river.

As for tailgating, has anyone ever made it a post-game event? Avoids the traffic?

FS1 is definitely better than U or + or whatever the junk was at the beginning of the year.

At this point, I'm just happy to have a competitive KUFB team on the field. I'm not going to get picky about what time slot they put us in, whether we are being "disrespected" or not, care about our ranking, or entertain the idea that JD has even an iceball's chance in hell of winning the Heisman (I mean, he plays for Kansas, not Alabama). This team has already surpassed my wildest dreams for this year. If they can win two more games and get to a bowl game, I think I might just start floating everywhere I go.

Tailgate before AND after the game. Be happier because you aren't driving in the traffic (and its actually significant with a sold out stadium). Just change what is on the menu... Breakfast, lunch, or dinner. Last week it was some breakfast burritos. This week its gonna be filet mignon and baked spuds. Is it Saturday yet?