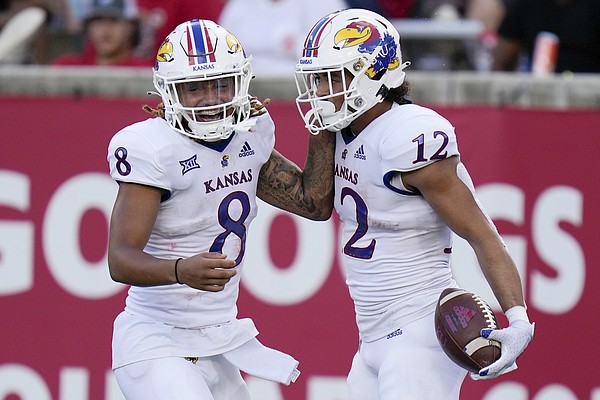 Kansas running back Torry Locklin (12) celebrates after his touchdown with Ky Thomas during the first half of an NCAA college football game against Houston, Saturday, Sept. 17, 2022, in Houston. (AP Photo/Eric Christian Smith)

Momentum and confidence are massive things to have on your side in the world of sports, and it’s safe to say that after its 3-0 start the Kansas football team has a firm grip on both.

Not only have the Jayhawks jumped out in a way that very few saw coming, but they also have done it with two wins on the road and one of those coming in conference play.

The KU players believed something like this was possible. After all, they were the ones who put in all of that work in the offseason and built up the kind of chemistry and belief that said the corner could be turned.

But even they have to be a little shell-shocked by things going so well so early for the 2022 Jayhawks.

That showed loud and clear in a postgame video featuring quarterback Jalon Daniels that surfaced after the win at West Virginia.

Daniels, who has been nothing short of spectacular so far this season, was seen yelling into the camera, “We here! We here! New era! You heard it. New era!”

The words were dripping with passion and even featured a little bit of anger, that good type that helps you pull off a big win like that on the road and shows the rest of the world you’re serious about being relevant.

Fast forward one week to the scene on the field after KU’s 48-30 victory over Houston on Saturday and you find a very different vibe from Daniels.

Don’t get me wrong, I’m sure there was still a whole lot of yelling and screaming, but the video that KU captured and released after that win showed a much calmer quarterback, one who seemed comfortable in the moment and far less surprised that it happened.

Just like that, in a matter of seven days, you saw KU’s leader transform his reaction from euphoric, unbridled joy to cool, calm and collected. It's a dramatic change in a short period of time and it says a lot about where this program is and where it's headed.

That’s a player who believed the Jayhawks were going to win that game at Houston and then went out and made it happen.

Now that that’s the case, there’s no telling what’s possible from here.

Next up, KU plays host to unbeaten Duke (3-0) at 11 a.m. next Saturday at David Booth Kansas Memorial Stadium.

Jalon Daniels is rapidly maturing into the kind of leader every football team dreams of having. If he keeps getting better, I think he could have a future in the NFL!

Agreed Bryce. I liked how he just flicked that ball to Locklin with a guy in his face. He has a cannon in those guns.

Matt, kind of off-topic, but in another story you mentioned how our returning players ,due to the scarcity of success in the past, were hungry to embrace the new culture and discipline.

I just hope Coach Leipold realizes he very likely would not get that from Nebraska players, who might feel more entitled. And certainly their fan base is overflowing with entitlement. Hopefully so much so that they would reject or not entertain having a coach only a couple years removed from division three.

David - Coach is a couple years into KU. It’s close to a decade ago that he was winning all the D3 championships. My guess is that the Nebraska players would embrace Coach Leipold’s leadership and even the fans would - until he didn’t produce championships. Hopefully we don’t have to worry about it.

Matt - Do you think coaching factors into the difference? The former reaction sounds like the locker room response, even spilling out into the media session after Houston, while the latter onfield reaction sounds much more like Coach.

One of the things that has had me excited about Coach Leipold since arrived was what I call the soft skills. When we first met Kelly, she commented about his ability to motivate, and we’ve seen in the players his ability to challenge and motivate.

Coach Leipold’s leadership reminds me a lot of Coach Self. Lots will and has been said and written about Xs and Os, Jimmies and Joes, but it’s the other aspects of their leadership that sets them apart IMO.

Jalon is playing great and deserves some recognition..Great job!!!...but the season is just beginning...the team needs to continue playing hungry football....NEVER SATISFIED!!! The blinders always need to be on...total and complete focus on everything you do ...getting the homework done...memorizing the playbook ...to where things happen by REFLEX...being the smartest team in the country and playing like it...doing all the little things and doing those things well...again by REFLEX......the game against Duke this weekend is a STATEMENT GAME...a quarterly examination...so study hard and make an A+ !!! GOOD LUCK!!!!!

Dirk, I should’ve said “a few years removed“. Can’t you see I’m trying to talk myself into the idea that Coach should not be interested and hopefully Nebraska is not interested in him!? :)

It's also a little bit different when your team pulls a win in OT with a walkoff INT return, vs a more comfortable victory where the team lead by mulitple scores for almost the entire 2nd half.

You're sure to get more raw emotion after the dramatic win in Morgantown.

Great point. I hadn't really considered this, but there's no doubt that it played a role. Thanks!

Time for a meeting with Jesus with the Admin and the coach. I realize they gave him a raise but bring your checkbook and ask what would it take to keep you at KU ? and stay hungry.

BJ - Do you go back to the 2008 BBNC? I’m recalling all sorts of speculation at that time about what it was going to take to keep Coach Self at KU. NBA and OSU? Open the checkbook was a common response. Bill’s response was build the student housing that will help me recruit.

I could see a similar response from Lance. If the leaders take, take, take, there will be less for facilities and actually making KU relevant. Travis made the wise comment that KUs stellar BB can’t continue to carry the university.

Maybe, when the plan for the facilities start to get rolled out in November+, the coaches will follow JWil and Kevin (huge hat tip to the brand new Jayhawk for stepping up for the community before he even steps foot on the court for the good guys). The little apple has a stadium named for their iconic coach. Guessing our “I’ve never been carried off the field by the players” coach will be humble enough to resist naming it, but I can definitely see him being interested in building it.

Noticing Ky celebrating with Torry in the photo. It was the fake to him that made the pass to Torry so successful. Hopefully, everyone that matters recognizes and appreciates his impact on the play. Guessing he’s one of the people Coach is referring to when he commented on players wanting more touches. I’m looking forward to his breakout play/game and him receiving the celebration.