Five notable storylines that have surfaced during the Kansas basketball preseason 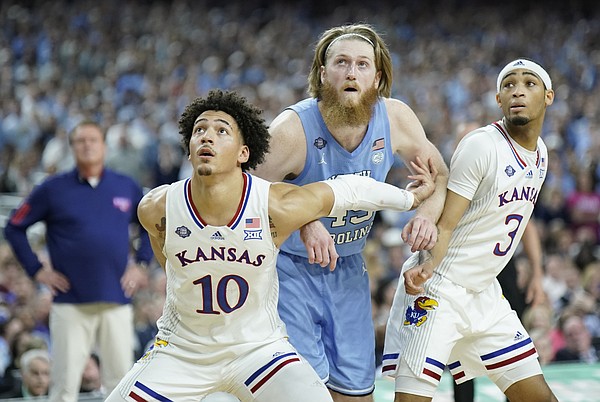 With Kansas basketball boot camp in full swing and Late Night in the Phog now less than a month away, it’s time to start looking ahead to the 2022-23 college hoops season.

Yes, we can do that while still covering the heck out of the red-hot Kansas football team, as well.

It’s definitely a little different to have both sports matter as much as they do at this time of the year, but that’s obviously been good news for KU.

It’s also still unknown just how long football fever will have a hold on KU fans.

The Jayhawks (2-0) play at Houston this weekend and will return home to play Duke at 11 a.m. on Sept. 24 before diving into conference play the rest of the way.

Regardless of how those games go or how long people’s interest in Lance Leipold’s program remains as high as it is right now, the college basketball season will be here before you know it. And that means it’ll be time for the 2022-23 Jayhawks to open play as the defending national champs in a little over six weeks.

Even though several key parts of the 2022 title team are no longer on campus, there’s still plenty to like about Bill Self’s bunch this season.

The 2022-23 Jayhawks have a good mix of returning players and talented newcomers and there are at least five or six players who have a chance to take a major step forward while filling bigger roles during the upcoming season.

I caught up with Self the other day to talk about the roster while he was down in Florida recruiting and here are the five things that stood out from our conversation.

• Dajuan Harris Jr. is going to be special

If you’ve paid any attention at all, you know that Self has loved Harris from the minute he arrived on campus. But to hear him talk about his point guard now is a whole new thing.

Not only does he still appreciate Harris’ team-first mentality and defensive presence, but you also get the feeling that the point guard has improved his game in every way imaginable and that he will enter the 2022-23 season with high expectations for himself and the team.

He can’t get much better as a defender, but I think there is plenty of room to improve as a scorer and a leader and it sounds like we should expect to see Harris shine in those areas, as well, in the months ahead.

He’s not built from the same mold as Frank Mason III or Devonte’ Graham, but it sure seems like Self is as big a fan of Harris as he was of those two KU greats.

• Both Zuby Ejiofor and Ernest Udeh Jr. are going to play

When talking about the two freshmen big men, Self said both Udeh and Ejiofor were “ahead of what we anticipated their schedule to be” and that they both would play minutes immediately. That’s pretty significant news and it’s likely because of their athleticism and approach.

Both seem like players who are willing to do whatever and play wherever to help the team. And they’re both active and strong around the rim and willing to learn and be coached.

Udeh projects as a 5 and Ejiofor is probably more of a 4, but that just means there could be room for both to play meaningful roles. If either (or, again, perhaps both) can bring a dimension of physicality and toughness down low that others can’t, his role will become even more critical.

• For Kevin McCullar, it’s all about knocking down shots

Self knew what McCullar could do on the defensive end when he signed him, and, during our recent conversation, he referred to the former Texas Tech standout “advanced defensively.”

He also knew that, with McCullar’s size, experience and versatility, plugging him into the lineup was not going to be a problem. The guy can play anywhere from 1 through 4 and can blend in with any style and anybody on the floor.

The biggest question about just how good he can be this season is tied to his ability to shoot the ball. If he can knock down open shots consistently, he’s got all-Big 12 potential.

• KJ Adams is an absolute luxury

There was a lot of talk in the summer about whether Adams was more of an inside player or a perimeter player. He said then that so much of where he fits was tied to his jump shot and Self said this summer that he envisioned Adams playing more on the perimeter this season than he did last season, when he logged limited minutes and often at the 5.

While the distinction between Adams living inside or on the wing was not made any clearer during my recent conversation with Self, one thing was — Self called Adams positionless and added “how do you keep him off the court?”

For my money, you can’t. And I think Adams will have as good of any opportunity as anybody on the roster to have a true breakout season. And that’s even if he doesn’t start.

Last but not least, I talked to Self for a minute about Jalen Wilson, the team’s top returning scorer from the title team, and there’s nothing but good news there.

Self said Wilson was “hungrier than ever” and that his versatility, attitude and approach have been terrific. While this is not exactly a surprise, it’s definitely big news nonetheless.

Remember, most of the guys Wilson came in with and won a title with are gone now, and it would not be crazy for him to need some time to adjust to that. It doesn’t sound like that’s been necessary, though.

From the minute he announced he was returning to school, Wilson fully embraced his role as the top veteran and team leader and it’s clear that he wants to lead this group the way Ochai Agbaji led the Jayhawks last season.

Beyond that, clips from KU’s recent practices have shown Wilson shooting the heck out of the ball, and, as you all know, that was an area he earmarked for improvement this offseason.

Wilson’s staring at a big season in front of him and he seems to be putting in the necessary work to make sure he delivers when things get rolling. He’ll be the perfect player to lead this team and it seems as if Self believes Wilson is ready to take on the responsibility of filling that role.

After taking this weekend off, KU will wrap up its 20th boot camp under Self sometime next week and shortly thereafter will begin the first official practices for the 2022-23 season, which opens with Late Night on Oct. 14 and an exhibition game against Pitt State on Nov. 3.

KU’s season opener is set for Nov. 7 vs. Omaha at Allen Fieldhouse and the Jayhawks also will face North Dakota State at home on Nov. 10 before heading to Indianapolis for the Champions Classic clash with Duke on Nov. 15.

The conference schedule is still not out yet, but that should be released soon, likely before the end of the month.

Found an older “Booth Review” with Swanson and Chasen last night, where they talked with Mitch and Teahan.

One of the questions was what upsets Coach the most? Not accepting Coach’s critique during film sessions. One example was of Mitch being beaten down court by an athletic freak that no one was going to keep up with. Mitch took it in stride though inside he was thinking about how hard he was working. Others have apparently complained in response to critiques and 3 hours later the team is finishing a grueling practice on a “light day”. It will go much better for everyone if they quietly learn from the master.

That was another thing that stood out; just how much admiration and respect for how much Coach knows, and that it was so much more than what they even anticipated coming into the program.

It was also one of the things they laughed about with respect to social media flames. That and criticisms of Dave and Remy plus a few others.

Really interesting interview and worth searching for.

Criticism of Dajuan too.

It would seem several of those fall into the question of a huge 3pt void waiting to be filled. The D should be fantastic with lots of versatility and switching. The big 3, Dajuan, Jalen, and Kevin, need significant improvements in their 3 results, and at least 1 or 2 more players will need to step up for this team to maximize its potential.

Beyond those 3, it would seem a question of identifying roles and filling them effectively. It’s encouraging that the 2 freshmen as well as KJ are doing well. Some players try to be more to their own detriment and that of the team.

Glad that Jalen learned from Ochai.