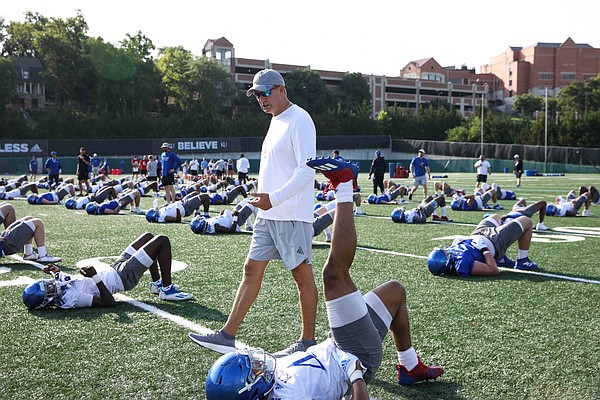 As No. 19 Kansas and 17th-ranked TCU set to battle for the early leg up in the Big 12 Conference football race, the goal, as it is each week and with every matchup, will be for each team to try to outsmart and outlast the other.

But there’s one thing the two unbeaten Big 12 programs have in common that figures to make doing that a challenge for both sides.

And it has everything to do with the way they prepare.

It goes without saying that Kansas (5-0) and TCU (4-0) go through a lot of the same steps and processes that most teams do while preparing their weekly game plans. Watching film is a must. Self-scouting is constant. And hard work on the practice field by both the players and the coaches, is automatic.

One of the ways the Jayhawks and Horned Frogs keep that preparation organized and efficient, however, is a bit unique.

Both teams utilize software from a company called Just Play Solutions, and the goal is for the teams to streamline every second of coach and player effort and interaction to get the most out of their training and teaching.

On its website, the company dubs its workflow software as an “all-in-one solution for coaches to prepare faster and connect with today’s athlete.”

The root of the Just Play philosophy is to help teams win more games by helping coaches improve the way they prepare, teach and engage their players.

One example of this is the platform’s testing capabilities.

Coaches can upload clips and game plans into the platform and then quiz their players on the details being emphasized and the schemes and fundamentals being coached. Based on their players’ answers, coaches then can identify potential issues before they even step onto the practice field, giving them a better feel for what their players understand and what might need work.

Coaches can use the platform to create content, integrate data and video and share it directly to a player’s device. That allows players to study and learn as much as they want — anywhere and anytime — even after they step away from the practice fields.

All of this is designed to improve the way players absorb and retain coaching, therein significantly reducing the preparation time for coaches.

Just Play is currently working with more than 250 NCAA Division I and professional teams. And they’ve been working in the space for the past handful of years across multiple sports and with 900 total teams.

Four of Division I college football’s 16 remaining unbeaten teams, including KU and TCU, use Just Play, and three of the four — KU, TCU and UCLA — are ranked in the Top 25. According to a news release from the company, those three increased their usage and reliance of the platform this season.

At Kansas, it took Lance Leipold and company a year to get their culture establish to dive more into the Just Play way. At TCU, first-year coach Sonny Dykes brought it over from his time using it at SMU.

“Being able to teach our playbook visually is a game changer,” Dykes said in a company-provided coach testimonial. “This is a phenomenal coaching tool.”

Founded by former KU football kicker Austin Barone in 2015, the company has more than just one KU connection.

Kansas basketball coach Bill Self and his staff have used it to train the defending national champion Jayhawks.

“It helps our staff teach our guys faster,” said Self in another company-provided coach testimonial.

And former KU football assistant coach John Reagan, who had two stints with the KU program, including one under Mark Mangino, recently teamed up with Barone as the company’s Vice President for Football.

Reagan, who coached at both Penn and Maryland after leaving KU the second time, is a 25-plus-year veteran of college football coaching, and he said he was nearly as passionate today about what Just Play can do for the game of football as he was when he coached it.

“My entire coaching career was dedicated to helping players develop with the hope that they would become the best versions of themselves on and off the field,” Reagan told the Journal-World on Thursday. “Just Play provides coaches with the opportunity to become more efficient and precise teachers and gives players an easy-to-use platform to maximize their athletic ability by becoming more effective learners.”

Current Texas Tech coach Joey McGuire first started using the software back when he was coaching at high school powerhouse Cedar Hill in Texas. Back in 2015, when reviewing the platform with Barone, McGuire said, “Innovation, to me, is the most important thing when you’re dealing with kids who are visual learners. It is important to keep their attention and keep their minds active, and Just Play does that because it is so hands on.”

KU and TCU will face off at 11 a.m. Saturday at David Booth Kansas Memorial Stadium. While you won’t see any actual evidence of Just Play Solutions at work while the action is unfolding on the field, just know that both programs probably would not be able to do as much as they’re doing out there without it.

Very cool article Matt. Nice that it was developed by a former player. Thanks for the insight.

There’s a bunch of technology stuff that is used by the S&C staff as well iirc. It’s great that an older HC is bringing all this innovation to the program. It would be great to hear about Coach Leipold’s master plan. Maybe after the season or maybe from TG, assuming it would have been something presented in the interview process. Change the culture is the catch phrase, but it would seem that there are many things like Just Play that would have fallen into various categories of improvement. Maybe that gets into details they want to keep private, but there seems to be so much more that goes into building a program than most of us have any notion about.

When did the BB start using it?

One of the phrases I noticed a lot from the BB team late in the season and through to the NC, as well as from the FB players to start the season was “attention to details”. I wonder if it has any roots in this software?