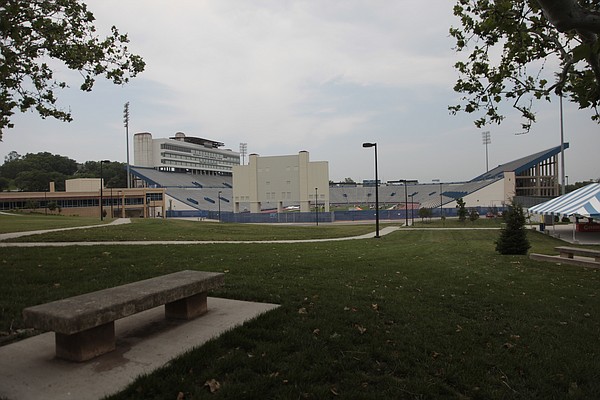 A wide-angle image of KU's football stadium from the Campanile hill leaves a lot of sky in the frame. by Mike Yoder

“Fill the hill,” they’re calling it, and they want Kansas football fans to do it on Saturday for a couple of hours before they Pack the Booth.

The KU football program on Tuesday evening officially announced the location of the College Gameday set for this weekend’s top-20 showdown between No. 19 Kansas and 17th-ranked TCU.

The set for the Saturday morning ESPN preview show will be located smack dab in the heart of the Campanile hill setting.

Based on the map put out by the KU football Twitter account, the set will actually be between KU’s regular white tailgating tents on the hill and the KU practice fields to the southeast of David Booth Kansas Memorial Stadium.

There, ESPN camera crews and the cast of Gameday — host Reece Davis along with Kirk Herbstreit, Desmond Howard and Lee Corso — will put a 3-hour spotlight on Lawrence, the KU campus and the Kansas football program leading up to the 11 a.m. kickoff between the Jayhawks and Horned Frogs on FS1.

The Gameday set will face cameras at the bottom of the hill, with the Campanile bell tower and Kansas fans in the background.

Saturday will mark the first appearance in Lawrence by the Gameday crew for a Kansas football game. The college basketball version of Gameday has, of course, made several trips to Lawrence for Kansas hoops action.

This time it’s football they’re in town for, and the Jayhawks, led by second-year head coach Lance Leipold, are off to an improbable 5-0 start to the 2022 season, which has featured back to back home sellouts and a return to the national polls.

All signs point to Saturday’s game marking a third consecutive sellout for the Jayhawks.

Gameday will conduct the first two hours of its pregame show outside of the stadium, near the hill, from 8 a.m. to 10 a.m., before moving inside the stadium for the final hour leading up to the 11 a.m. kickoff.

The location for @CollegeGameDay in Lawrence is officially set! pic.twitter.com/XXhdbr3Q4W 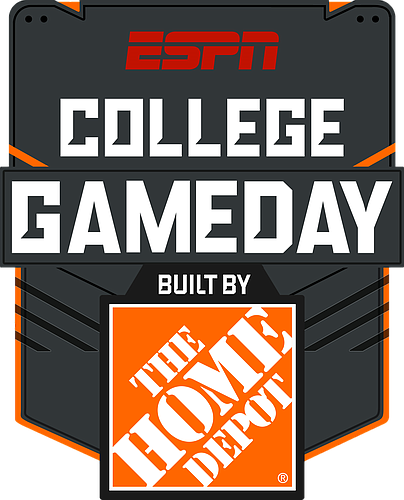 ESPN's College Gameday is coming to Lawrence, Kansas for a football game for the first time ever on Saturday, Oct. 8, 2022. by Matt Tait

The hill is one of the most serene and beautiful spots I've ever spent time in. Can't wait to watch on Saturday.

A fitting post interview would be to throw all the football moderators and TV cameras into Potter's Lake.

Matt....How many tickets are left to be sold?...Daily updates on that would be welcomed.

Brad, this site doesn't show the number of tickets remaining but you can see which sections are sold out, which sections have "low availability," which is all the remaining sections. Also, click on a section to see which seats are available. https://kuathletics.evenue.net/cgi-bin/ncommerce3/SEGetEventInfo?ticketCode=GS%3AKU%3AF22%3A04%3A&linkID=kansas&shopperContext=&pc=&caller=&appCode=&groupCode=FBSG&cgc=&dataAccId=977&locale=en_US&siteId=ev_kansas

Matt - I saw one of the preview videos that has already released. You should have a link here. You did great.

How long was the makeup crew prepping for it? 😉

This was from last Saturday.

Thanks for posting that, Jonathan. And thanks for the kind words, Dirk. I sat with them for about 30 minutes and they used way more of it than I expected.

Funny moment. I usually wear glasses. And Micah Brown (former KU football player & terrific video guy) knew that. So they set up the light and cameras to try to reduce the glare on them for about 20 minutes before I even showed up. Then I walked in without my glasses.

I did it on purpose because I know that glare sucks. And they were stoked because it makes for a better shot. Just funny that they prepped for one way and it all went for nothing.

Good times, though. I appreciated being asked to be a part of it.

Thanks Jonathan. The video I saw only had the middle.

Matt, does it make your job a lot easier having so much interest in Football right now?

You're drawing so many more clicks and comments without having to come up with puff pieces about what the basketball players eat for breakfast and what Bill Self said to the parking attendant about this year's team.

Heck I'm so excited about football it's easy to overlook that we start our national title defense in a month.

Easier and harder, to be honest. There are only so many hours in a day and we only have so many bodies to cover things right now that it can be a big time challenge to try to stay on top of everything.

But it's a good problem to have for sure and it's very cool to see the football content we're producing getting traffic like the basketball program usually does.

Truth be told, I haven't written nearly as much hoops stuff — "puff" or otherwise — at this point this year just because of the start of the football team and the interest from fans and readers.

It's been fun to follow and cover and it should remain interesting and relevant for at least the next two months.

Thanks for the reply! I know that you are a very busy man right now. Here's to hoping the magic carpet ride can continue this weekend!