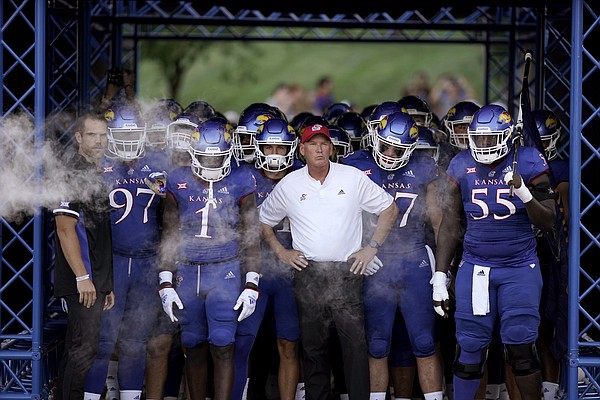 Kansas head coach Lance Leipold and the Jayhawks get ready to take the field against Tennessee Tech on Friday, Sept. 2, 2022 at Memorial Stadium. by Nick Krug

There’s been no shortage of speculation about Lance Leipold’s future this college football season, and the topic came up again on Tuesday during his weekly press conference.

Just two days removed from landing on a list of possible replacements for the recently fired Paul Chryst at Wisconsin, Leipold on Tuesday was asked how he handles such distractions with his team.

Earlier this season, Leipold’s name landed on a similar list for the Nebraska opening and he remains a popular figure in Lincoln, as well.

Before his response on Tuesday, Leipold offered a disclaimer.

“Paul Chryst is a friend,” he said of the now-former Badgers head coach. “I’ve known Paul since probably high school. I knew his late father. That’s a good family, good man, and it’s just unfortunate with guys who average nine wins a year getting let go. But it’s part, I guess, of what we’ve signed up for these days, and it’s a changing world in a lot of ways and that’s unfortunate. It’s unfortunate for locker rooms and I think we lose that, as well.”

He continued: “There’s a lot of components, and I’m not questioning anyone’s decision because there’s a lot of factors that go into (it) that none of us really know.”

Those words would have rang true for Leipold even if he was nowhere near the UW lists. As it stands, though, the Wisconsin native is expected by many to be a serious option for the Badgers, even while Leipold has no interest in discussing any of it.

“I'm focused on this,” he said of his job at Kansas, repeating similar words he uttered when he was asked about the Nebraska opening a few weeks ago.

Given the fact that he has led KU to a 5-0 start and back into the national polls for the first time in 674 weeks, Leipold spent most of the day Sunday looking ahead to this week’s game with TCU and searching for ways to move the Jayhawks to 6-0.

“We’re in film rooms and other stuff; I don’t even know what’s going on,” he said Tuesday. “I didn't even know some of the stuff that was going on Sunday until later in the evening. All of a sudden, I got all these text messages.”

Those messages no doubt sought his reaction to Chryst's firing and may have included inquiries about whether he would have interest in the job.

Leipold has made it clear that he’s not talking about any of that, though, and he’d prefer to keep his focus on the job at hand. “Be where your feet are at,” is how he phrased it when talking on Ryan Leaf’s “The Straight Line” podcast recently.

The more KU wins, the more the distractions figure to mount and the more interest Leipold will attract from Nebraska, Wisconsin and who knows where else.

Regardless of which school is next or how long the questions linger, you can expect to hear Leipold say the same things whenever he’s asked.

“We’re extremely happy here,” he reiterated Tuesday. “We have no plans of going anywhere, and anything like that is just, you know, rumors.”

So, Goff is currently working on a new contract offer. In total, probably about double what the coaching staff as a whole is making right now, or else it won't be enough. It's important to remember that Leipold isn't just thinking about what a job provides for him, it is what it provides for all of his staff. The good news for KU is that it can actually estimate what the revenue stream would look like with a full stadium. And that's without next year's inevitable ticket price hikes.

Does KU have the money?

Concur on all your points. Most head coaches at this level are making millions -- including Leipold.

It's their staff they want to make sure are getting compensated enough to stay.

I agree with the sentiment that those numbers probably have to double -- even moreso than his actual number -- take make it worth it.

This happens everywhere though. And unfortunately this is a place a Big 10 school will likely have that over us. At least $$$ wise.

My guess is KU will make this work. Im comfortable he actually wants to stay. He's a builder. But Wisconsin will certainly be calling.

Offering him a new contract during the season would be a distraction for a coach and the players.

All things point toward that he his has turned our floundering ship around. He has only coached 17 games though. I support offering him a new contract, but not till this season is over. It would be an overreaction with a touch of a poorly timed knee jerk reaction to do it before it ends.

Brett you are right you have one shot to get it right, Show him all the Money, if you have it.

Matt, any coach and I mean every coach is going to say they are Happy at [fill in your school name here]. What else would you say?

I think you kinda answered your last question with your analysis above. KU should have the money if we continue to sell lots of tickets and merchandise, and go to a bowl game. All of that combined should help cover increases for LL and his staff. Winning and success also bring in more donors/dollars, though those funds might be diverted to stadium renovations that we seem close to announcing.

Brett, you must have read my post last week....and hopefully from what Leipold said he might have read it as well. Firing someone with 8 or 9 wins is nothing for Nebraska or Wisconsin to talk about and who wants that pressure. If KU steps up and offers "The Money" I can't imagine any coach going to a school to be 3 and out! KU proved under Mangino that you can contend for the National Championship from Lawrence. I still feel the sting of that KU-MU game in Arrowhead. I think I read Leipold is 57. Leipold has the chance to stick around 7-15 years and retire without having to be under that kind of pressure earn just as much money, without that BS. Its only been 18 months but I am sure Leipold's kids have made friends. So why upset the family apple cart. Leipold has the chance to go down in KU history building a new program and new stadium. Most Coaches, "Like a real Challenge", but at Nebraska or Wisconsin you likely end up being a side note - and then someone else's assistant coach.

Nice to hear LL point out how unfortunate it is that Chryst can average 9 wins a year and still get fired. Doesn't seem like something he'd be interested in signing up for.

That's what I'm going to keep telling myself anyways!

Its the B10, different rules apply.

At WI you are expected to beat the bottom feeders. Chryst was let go to give Leonhard a live trail period. Before they throw a lot of money at him.

I seriously doubt KU will have to start a GoFundMe campaign to keep the staff. If they do, though, put me down for $20.

The big time doners can surely see what locking these guys up can do for long-term success (and revenue). This seems like a much safer investment than any of the past 4 knuckleheads.

Cool I won the pot. How soon will someone mention a gofundme idea to keep coach L.. I had before Oct. 7th.

We seem to forget that for the Leipolds, family happiness is a major factor, as well. He is on record, more than once, that they are very happy in Lawrence. Also, as a father who helped raise three children I know well the fragility of the teenage psyche. They moved their high school aged son a year ago. You just don't uproot a child that age again just a year or two later. Maybe when he graduates high school, but not until then unless there is no other choice. Maybe some families don't care about that but the Leipold family seems to put family first. Thus, I don't see them even entertaining an unnecessary move at this time. Money is not the end all for this family, so long as they are financially comfortable. I do think KU needs to up his salary, though, in recognition of the job he and his staff have done. And I agree they also need to make sure the key assistants and staff get significant increases, as well.

At this point if he leaves I'm just going to laugh hysterically. This would be such a punk on us.

It's going to get interesting in November and December. All of the media outlets are pushing the narrative of Wisconsin going hard after Leipold. It is definitely true right now that the best thing for Kansas right now would be for Wisconsin to soar high under their interim HC Leonhard

It’s telling that Lance mentioned a coach who was averaging 9 wins a year losing his job. If ANY coach at KU averages 9 wins a year over multiple seasons, barring improprieties, he’s not going be fired after one losing season.

If a KU football coaches wins 9 in consecutive seasons, he'll get a contract extension and a statue.

when it comes to KU football: "don't underestimate KU Athletics ability to (mess) things up"

that said, if KU has a coach averaging 9 wins a year over multiple seasons... hang on and enjoy the ride.

Extreme happiness is always short-lived. What happens if in a few weeks from now he is anything less than extremely happy?

I my only hope is that KU becomes to Lance what KSU was to Coach Snyder. Hopefully the potential to build your own legacy at KU is worth something. Being able to turn KU around, and establish some year after year consistency and success...being able to influence a stadium rebuild...what else? I fully understand $s are number 1 to some people. But following a coach who got fired for "only" winning 9 games...that's also got to speak about what you're stepping into.