Kansas basktball coach Bill Self says KU's 3-point attempts should be up this season; here's why & what that might look like 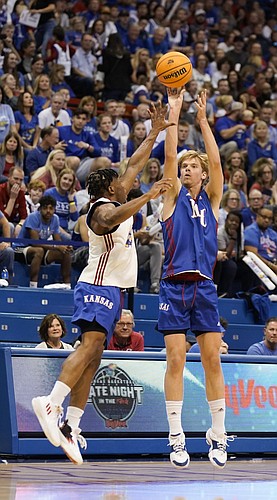 It makes sense given the fact that Jankovich’s best skill is and always has been his ability to shoot the ball from the outside. But it also underscores the situation the Jayhawks are facing from behind the arc entering the season.

Self has said repeatedly that he thinks the 2022-23 Jayhawks will be a team that has to make jump shots to have success, largely because he’s not sure how good this group will be at getting easy baskets, be it in transition or in the post.

“It’s going to be imperative that this team becomes a good 3-point shooting team because I think we’ll take a lot,” Self said at last week’s Big 12 media day in Kansas City, Missouri.

How many is a lot?

“This team should shoot more 3s than last year’s team,” Self said this week at KU’s own media day in Lawrence. “Should. And if we do that then (we) need to make 35% as a team or 36% in order to play efficient enough to warrant playing fast and shooting early.”

Like most years, Self said he wants this year’s team to play as fast as possible. Run when it’s there, push the tempo after makes and misses and turn up the pace with defensive intensity.

That style, the theory goes, will lead to easy baskets and take at least some of the pressure off of Kansas to score through its half-court sets.

“We want to play fast,” Self said Tuesday. “We need to score before the defense gets set. But how well we shoot it will probably determine how fast we play.”

That brings us back to Jankovich and why he’s being talked about as an option off the bench.

The 2022-23 Jayhawks enter the season looking to replace a whopping 75.9% of their 3-point field goals from last season.

That’s 103 3-point makes by Ochai Agbaji, 51 more by Christian Braun, — both of whom are in the NBA right now — 30 from Jalen Coleman-Lands and 29 more from Remy Martin.

In all, Kansas lost 217 3-point makes from the 286 it hit as a team during the run to the national title.

That’s a big number, both in terms of total makes and percentage. And it paints a clear picture of why Self has emphasized this team’s outside shooting so often this preseason.

“I think a big key to our team is just making shots,” he said.

Jalen Wilson is KU’s top returning 3-point shooter in terms of makes (30 of 114 last season), and it’s also been made clear how important an improved shooting season by Wilson is for him and the team.

After that, it’s Dajuan Harris Jr. and his 20 makes in 62 attempts and Joe Yesufu and his 11 makes in 42 attempts that are the top returning shooters with Wilson from a season ago.

The Jayhawks will ask Harris to be even more aggressive as a scorer this season and Self has said repeatedly that Yesufu’s role for the 2022-23 team will be to go score. If either can do that consistenly from the outside, it will help answer this team’s 3-point shooting question.

But even if they’re both terrific, KU’s going to need more.

Freshman Gradey Dick has a chance to start and could get a whole bunch of 3-point looks.

Outside shooting is one of Dick’s best skills and coaches and teammates have said that his 6-foot-8 frame and high release make his shot nearly impossible to block. Now he just has to show how quickly he can dial it in and how consistent he can be with it.

The last KU freshman to come in as a true gunner was Quentin Grimes during the 2018-19 season. He made 54 of 159 3-point attempts in 27.4 minutes per game that season but was limited elsewhere, which limited his impact.

Prior to that, you have to go back to Ben McLemore’s first season as a redshirt freshman in 2012-13 to find a true 3-point marksman who shot the number of shots that Dick very well may this season. McLemore made 73 of 174 3-point attempts for the Jayhawks that season.

Dick has more to his game than just shooting the ball from distance, but there’s little doubt that his most important role during his freshman season will be knocking in shots.

Outside of that, it’s really more of shoot when you’re open-but-you-don’t-necessarily-have-to kind of thing.

Sophomore big man Zach Clemence is a terrific outside shooter but we still don’t know how big his role will be. Bobby Pettiford, Kevin McCullar Jr., MJ Rice and even KJ Adams all can shoot from distance, but they’re not likely to have plays run for them to get 3-point shots.

Jankovich would. But how often he gets that opportunity — if at all — really will depend on how the rest of the guys on this roster shoot the ball first.

Interesting that these statistics are significantly different than the ones shown on the espn website.

It is also misleading to talk about season totals when there are significantly different number of games played. Between earlier exits in March and pandemic truncated seasons, the last three seasons had as much as 25% fewer games. I think the previous 3 teams all took more 3’s per game than the NC team. Interestingly, they all seem to have played at a faster pace; more fga per game. A big caveat with this is the accuracy of the espn data.

What will be interesting is to see how they play with the personnel they have. For maybe half of each game (?) they seem unlikely to have a traditional big man anchor in the middle. Are 2-4 posting up smaller players while our non traditional bigs shoot 3’s? Will the wings shoot 3’s well enough to force the D to play tighter and make it easier to attack the paint? CB seemed to feast on that last season.

There’s also the potential for a nasty D with Kevin joining Dajuan. Kevin also provides the third player capable to initiating the break. Jalen and CB were so good at that last season.

It will be so interesting to see how Coach paints the picture this season.

I thought about that, but the main point of the article is Self saying this team will shoot more 3s than last year's team and last year's team played the maximum number of games a team can play. The numbers are a little blurred from the COVID-19 season (2020-21) and even missing out on postseason play in 2019-20.

But for the most part, it's been even enough to make the comps. Especially when you're comparing what this year's team might shoot to what that 2017-18 team did shoot. That team played one shy of the maximum number of games. It remains to be seen if this one will, but it's all relatively close.

You're right, though. 3-point makes per game is probably the better stat here.

As long as they are good shots and we make 40% give or take 2 or 3 percent, I'll be okay with this. But we still have to get the big guys the ball for some looks.