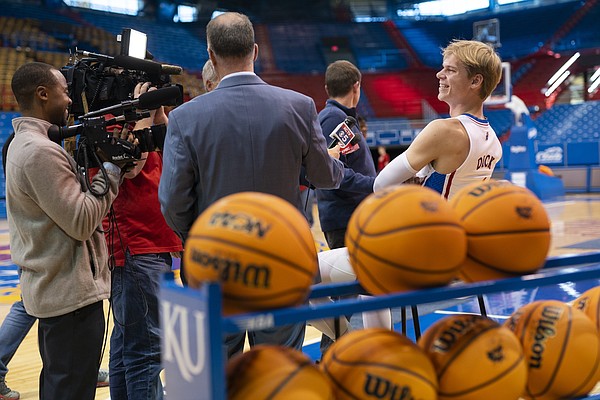 Kansas guard Gradey Dick (4) laughs with reporters during an interview on Tuesday, Oct. 25, 2022 at Allen Fieldhouse. by Nick Krug

Kansas basketball coach Bill Self has long said that freshman guard Gradey Dick stands to benefit as much as anyone on KU’s roster this season when it comes to name, image and likeness opportunities, simply because of his status as the reigning Gatorade national player of the year.

On Thursday, WME Sports, the company managing Dick’s NIL opportunities released details of one of the biggest NIL deals to date involving the KU freshman.

Dick, a native of Wichita, has teamed up with Salina-based Long McArthur Ford for a set of television spots that will run throughout the upcoming NCAA basketball season.

The “Give Everything” campaign not only features Dick as the focal point of the car commercials but also was created by Dick, who served as the executive producer on the project.

“It’s been an amazing experience being able to partner with Long McArthur for this campaign, and not just because I love, and drive Ford,” Dick said. “As a Kansas kid through-and-through, it’s great to align with a team that values this state just as much as I do, and is just as dedicated as I am to doing their best to deliver for it. That’s the whole concept of Give Everything, it’s the way I approach basketball, the way Long McArthur approaches service, the way Ford approaches its cars, and the way our great state approaches life.”

According to the news release announcing the partnership, the KU freshman “was instrumental in the process of the creation of the spot, advising on everything from creating storyboards, and researching and identifying the production company partner that shot the spot.”

According to the release, that company was Blank Square Productions, which has previously created content for Grammy-winning artists including Alicia Keys, Lil Wayne, J. Cole, Doja Cat and Drake.

The spot was directed by Edgar Esteves and Logan Fields.

Gradey Dick's "Give Everything" television spot for Long McArthur Ford by KUsports.com

That’s great for Gradey. NIL is nice, but producing probably says even more about the future than the present. Kinda like having his own NiL deal.

Does Long McArthur sell Roush Mustangs? That’s a sweet ride, but thought it went beyond what the showroom would give.

Give everything can often be very relative. Players commonly comment on taking it up a notch, because training isn’t the same as competition and November is different than January than March or April.