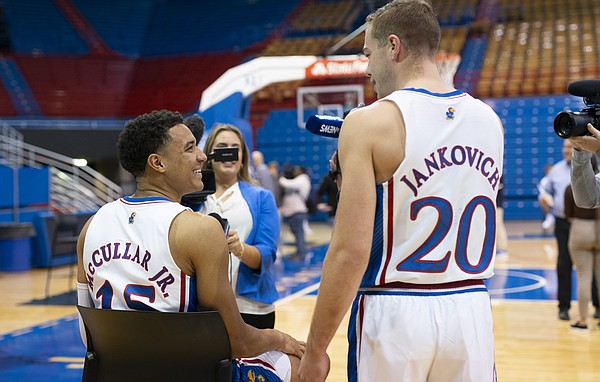 Kansas guard Michael Jankovich (20) jokingly cuts in during an interview with Kansas guard Kevin McCullar Jr. (15) to ask him questions about his Halloween plans on Tuesday, Oct. 25, 2022 at Allen Fieldhouse. by Nick Krug

During the past couple of months, Kansas basketball coach Bill Self has talked a lot about how freshmen big men Zuby Ejiofor and Ernest Udeh Jr. were ahead of where the coaching staff expected them to be at this point and made it clear that both are in the mix for significant minutes at the 5 this season.

In many ways, that qualifies as a surprise that absolutely could make this Kansas team better.

There appears to be another unexpected development taking place, though, and this one might be an even bigger surprise.

Self said Tuesday, at KU’s annual media day, that senior walk-on Michael Jankovich had impressed throughout the preseason. While it remains a little unlikely that Jankovich will find a way to crack KU’s rotation on a full-time basis, it’s clear that Self and the coaching staff are at least looking at whether that’s a move they should try to make.

“We can scrimmage every day and if we’re just trying to score the most points we can, Jank needs to be on the floor,” Self said. “He’s good enough to do that.”

Known as a scorer and dead-eye shooter throughout his prep career in Dallas — with one year at Northfield Mount Hermon in Massachusetts — the son of former Self assistant Tim Jankovich has battled both injuries and the walk-on hierarchy during his time as a Jayhawk.

Now, though, with Jankovich serving as by far the most experienced and veteran player among KU’s four walk-ons, he’s being looked at — at least today — in a different light.

Talk to just about anyone on this roster and they’ll tell you that Jankovich is the best shooter on the team. Talk to Jankovich and he’ll tell you it’s been that way for a while. And he’ll do it with a smile and without a hint of cockiness.

It’s that kind of confidence that made Jankovich a great shooter in the first place. And after putting in plenty of work at Kansas and paying his dues on the end of the bench, it appears as if he’s actually getting a real look from the coaching staff.

“You know, Jank shoots it so good,” Self said Tuesday. “(So) do you try to figure out a way where he could be your ninth man and just come in and hopefully get three looks in a half and make two?”

Self has talked plenty about how outside shooting will be a critical part of this team’s offensive attack because he does not foresee the 2022-23 team getting as many easy baskets in the post or in transition as the 2021-22 team did.

So Jankovich’s path to playing time is probably connected to that. If Kansas labors to score and Self needs someone to rip the lid off the basket by knocking in shots from deep, he could turn to the 6-foot-5, 190-pound gunner. It’s unlikely that Jankovich’s role would extend beyond spot minutes in times of great offensive need, but even that would be far bigger and better than anything he’s seen to date.

“Obviously, defensively and athletically he’s probably not to the point where he can play the same way that we probably want to play and be effective doing it,” Self said Tuesday. “But he’s been a very pleasant surprise.”

During his first three seasons with the KU program, Jankovich has appeared in 21 games, including 10 during last season’s run to the NCAA title. He has made five of the 15 3-pointers he has attempted in 45 minutes of playing time while knocking in three of four attempts at the free throw line, as well.

Kansas freshman Gradey Dick on the adjustment to KU & his expectations by KUsports.com

Kansas sophomore Zach Clemence on the big man battles & what he gained from last season by KUsports.com

Kansas sophomore Bobby Pettiford on the next step for KU’s returners by KUsports.com

Kansas guard Joe Yesufu on why his second season with the Jayhawks will be better than Year 1 by KUsports.com