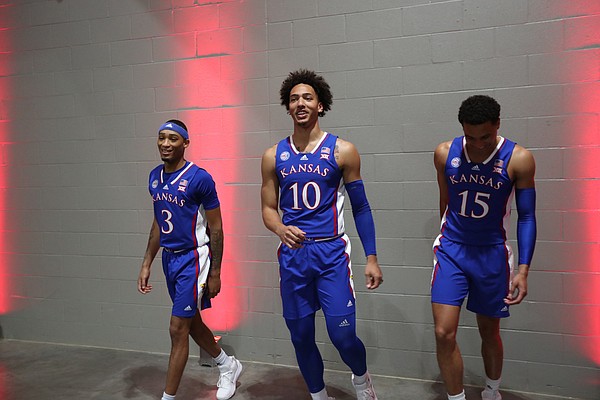 The Kansas men’s basketball team played a so-called secret scrimmage against Illinois at Lindenwood University in St. Charles, Missouri on Saturday and a few details have started to emerge.

One question, though: Is it really a secret if everyone knows about it?

Kind of is the answer to that question.

It’s against NCAA rules for KU or Illinois to promote the game or publish stats or a final score. So, you likely won’t find those things anywhere.

But there were a few highlights that surfaced and a few details that made their way around the Internet. The Kansas basketball program even provided a few of those.

According to a news release from KU, the two teams played one 20-minute period of a live-action scrimmage and followed that up with three 10-minute sessions and closed the day by working on four 4-minute situational periods.

The whole thing lasted just under three and a half hours and ended with both teams working on specific situations, most notably attacking zone defenses.

In the release, Kansas coach Bill Self called the scrimmage “competitive.”

“We had some guys step up and make some plays,” Self said. “We played a ton of situations in which the games came down to the last 30 seconds. That was good for us because we haven’t done much of that yet.”

Self also said KU’s “best players played pretty good,” which backed up a report from Stadium’s Jeff Goodman, who said he was told that transfer wing Kevin McCullar Jr. was the best player in the game for the Jayhawks.

“We’ve got to have some of the young guys step up and do better,” Self added in the release.

Throughout the preseason, Self has praised the play of McCullar as well as returning starters Dajuan Harris Jr. and Jalen Wilson, which could lead one to believe all three of those guys played well on Saturday.

The game was a bit of a reunion for McCullar, who was able to play against Terrence Shannon Jr., who teamed with McCullar at Texas Tech last season but transferred to Illinois in the offseason.

Entering the scrimmage, Self said he was hoping the Jayhawks would “find out where we’re at.”

“I know who we’re playing is very, very physical,” Self said three days before the Jayhawks and Illini met. “And it’ll be good for our young guys to play against that.”

Said Illinois coach Brad Underwood in an Illini news release following the scrimmage: "We got exactly what we wanted from today. It was good to go up against a different jersey for the first time and play out a number of different situations. Every game went down to the wire, which was a great experience for both teams. There were a lot of things I saw today that I liked, but also a number of areas we know we need to improve upon. This is why you have these scrimmages - to learn about yourself and get back to work."

Next up, Kansas will begin final preparations for its lone exhibition game against Pitt State on Nov. 3 and its regular season opener against Omaha on Nov. 7.

In the past, KU had always played two exhibition games against lower-level in-state schools. But beginning last year, the Jayhawks elected to cut the exhibition slate down to one game so they could take part in the secret scrimmage circuit to help better prepare them for the season ahead.

Last year, Kansas traveled to Tulsa to take on the Golden Hurricane in a secret scrimmage.

Great being able to go out and play again! 🤝 @IlliniMBB pic.twitter.com/bREjaJJOKk

None by Kevin McCullar Jr.

Supposedly it was 33-35 Illinois at the half and Terrance Shannon Jr was the best player for them. So the two best players in the scrimmage both transferred from Texas Tech.

Since at least Jordan, Pippin, and Grant, nba programs have built championship teams around a dominant trio and a bunch of role players. It seems that we have a lot more potential than a bunch of role players, they will need to step up big, learn from the “attention to all the little things” of the ’22 NC team.