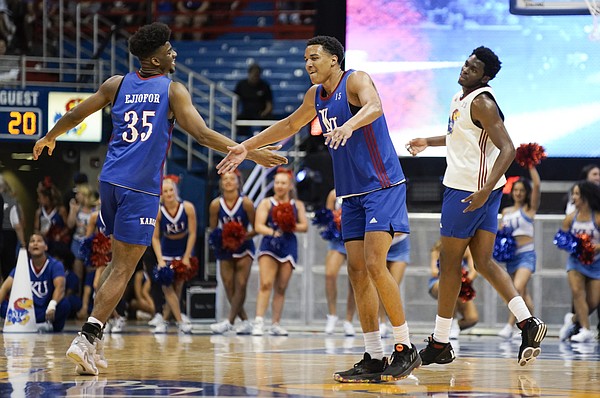 Kansas guard Kevin McCullar Jr. (15) slaps hands with Kansas forward Zuby Ejiofor (35) after a dunk during Late Night in the Phog on Friday, Oct. 14, 2022 at Allen Fieldhouse. by Nick Krug

Kansas basketball coach Bill Self was about as complimentary as you’ll hear him after a Late Night scrimmage on Friday night, following the white team’s 32-31 win over team blue.

That didn’t exactly mean he thought it was good, though, either.

“The ball didn’t move and we don’t know how to play yet and don’t guard,” he added. “But for that type of night, I don’t think it was awful.”

Divided into two teams of eight, with walk-on guard Charlie McCarthy not playing, the Jayhawks put on a scrimmage that came down to the final shot, knocked in by Jalen Wilson with less than 5 seconds to play to give the white team the victory.

I thought that was pretty telling. Wilson knows this is his team in many ways and he loves that. He has the confidence to be that guy and, really, has been waiting for the opportunity to fill that very role for the past couple of years.

Now that it’s here, he appears to be more than ready for it. Wilson had that rock star, Devonte’ Graham type vibe throughout Late Night so it’s no surprise that his team came away with the one-point win on the heels of his late heroics. 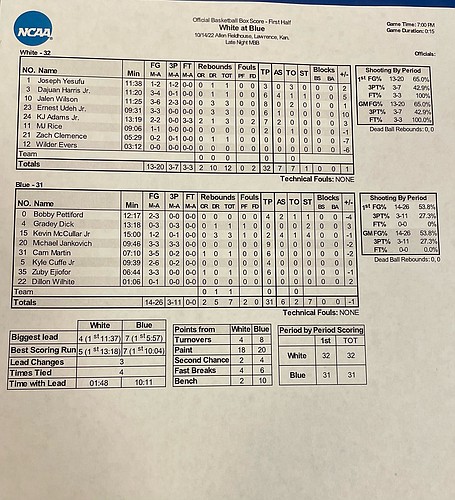 Here are a few things that stood out to me during the 15-minute, running-clock scrimmage:

• First off, Kevin McCullar Jr. absolutely LOVES to pass the ball. And he’s a damn fine passer at that. He finished with four assists and should have had at least two more if his teammates had been able to handle his passes or convert when they caught them. McCullar’s going to be such a big addition to this team because he fits in in all the right ways. Team first, great vision, ball mover, tough, competitive and athletic. He looked really good out there tonight and comfortable, too, which is not by any means a given for a guy playing for the first time in that type of atmosphere at KU.

• You may have heard Self’s recent comments about Dajuan Harris Jr. being better than ever. It sure showed out there on Friday. KU’s returning point guard looks so comfortable and smooth with just about everything he does and he looks to be in complete control of everything — himself, his body, the game, the offense, etc. — at all times. His confidence is sky-high and you’re starting to see a little personality emerge there, too. Harris finished in traffic with ease and also dished four assists while constantly looking to create plays by playing the right way.

• Self mentioned freshmen big men Ernest Udeh Jr. and Zuby Ejiofor in his post-scrimmage comments, and both stood out for their athleticism and effort around the rim. Udeh flushed a couple of dunks like Udoka Azubuike used to like to do — one even off of a lob — and Ejiofor was active running the floor and found his way to impact the game that way. He even caught and dunked one on a pass off the glass from McCullar in transition. “Ernest looked like he could play above the rim and make some plays above the rim,” Self said. “I thought that was impressive. I think Zuby’s a really good athlete and can do some similar things.” Both players have a ways to go before consistency and playing up to Self’s standards 100% of the time is part of their game, but they both look like they’re ready to contribute right away.

• Bobby Pettiford really stood out to me, too. Maybe that’s just because we just heard Thursday that he had been dealing with a hamstring injury, but he played and he looked quick and athletic and was aggressive throughout the scrimmage. He got out and ran in transition, flashed a little defense and hustle and even connected on a tough floater in the lane. The key to Pettiford taking off is simple. He just has to stay healthy. If he does, he’ll be headed toward a big year.

• KJ Adams showed Friday why he’ll play. Not only is he walking versatility, but he’s also so good at finishing inside. A lot of that comes from his strong lower body and explosiveness off the ground. But he’s also ripped up top and can finish through contact. He had a couple of great examples of that in the scrimmage. The next step is to show off how far his jumper has come this offseason. Self mentioned recently that KU doesn’t have a big they can throw it into for a bucket right now. But I’m intrigued by the idea of both Adams and even Jalen Wilson posting up smaller players and being that option for the Jayhawks when Zach Clemence or Cam Martin is in the game.

• Speaking of Martin, I thought he looked strong in the scrimmage. More important than that, though, he didn’t get carried away and pull up any ridiculous 3-point tries like we’ve seen him do in the past when getting caught up in the adrenaline of the game. He can hit that shot. We all know that. But that doesn’t mean you always have to take it. Self said recently that Martin is stronger than ever and he focused his efforts in this one primarily on using that strength. I’m still not sure there will be a ton of minutes for him, but I also don’t know if that means none either. Time will tell there and a lot of it will depend on how the other big men progress and develop.

• Freshmen MJ Rice and Gradey Dick had pretty quiet nights. That’s to be expected in some ways. Rice made the only shot he attempted and Dick was 0-for-3 from the floor. He did add two steals and I saw him out on the Fieldhouse floor getting up some shots and working out with a manager long after Late Night while they were tearing down the stage. Both players will be fine and they’ll both be a huge part of this team. One thing that did stand out came on Rice’s bucket. He used his size, strength and physicality to create separation and space to get his shot off near the free throw line and then drilled it. That’s his game. And he’s very good at that, physically mature beyond his years.

• It was just a scrimmage, but Zach Clemence didn’t look quite comfortable to me. He missed his only two shots and he looks like he’s still thinking a bit too much out there instead of just playing and competing. That might have been just a Friday night Late Night thing, but, based on Self’s comments about the uncertainty at the 5 on Thursday, it would not surprise me at all if Clemence is in a little bit of a rut as he tries to figure out how to jump into a bigger role. There’s time for him to get there, of course, and he’s too talented to not figure it out.

• Joe Yesufu didn’t do much to standout — other than his three turnovers — but he did look a little more comfortable asserting himself as a scorer. That only led to three points on one 3-point make, but he didn’t hesitate to pull the trigger and will need to both think and play that way when he’s out there if he wants to log big minutes.

• Finally, there’s walk-on Michael Jankovich, who drilled all three 3-pointers he attempted and appears to be well on his way to settling into that Chris Teahan role this year. Jank’s always been a terrific shooter and it’s cool to see him operating as the old head of the KU walk-ons. That doesn’t always lead to big minutes or a bunch of buckets, but it can create some pretty cool moments.

Kansas coach Bill Self on Late Night, a new banner & another Fieldhouse party by KUsports.com

KU newcomer Kevin McCullar Jr. on his first Late Night in the Phog by KUsports.com

Great inside info, thanks Matt!!