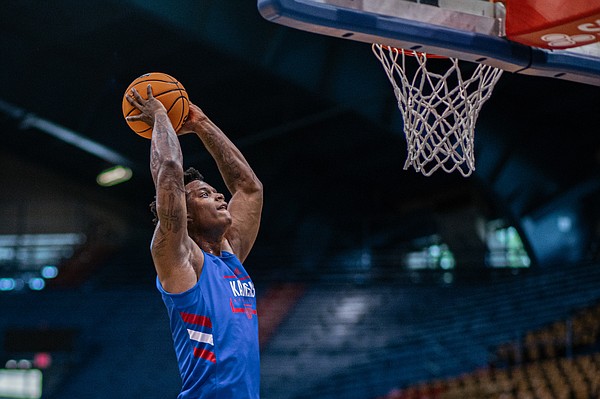 OK, now that we’ve gotten most of the IARP, self-imposed sanctions talk out of the way, let’s get back to the basketball for a minute.

You know, because there’s actually a game tonight.

Sure, it might just be an exhibition game against Pitt State. And, yeah, No. 5 Kansas should roll. But that doesn’t make it any less significant that basketball is back and we’re about to jump feet first into another season of KU hoops.

Tonight is when we get our first glimpse at what this team looks like. How do they play? Who plays? Who plays well with who? All of those questions and more will at least start to be answered with what happens tonight.

Beyond that, we’ll also get a first look at what Self is thinking regarding his starting lineup.

At this point, it seems like a lock that Dajuan Harris Jr., Kevin McCullar Jr., and Jalen Wilson are can’t-miss starters. It also seems fairly likely that freshman guard Gradey Dick will be out there for tipoff.

But who starts at the 5?

For one, this is the perfect game for KU to use Adams there because even though he’s undersized when you’re talking about Power 5 Conference big men, he’ll still be a load for the Gorillas to handle.

Beyond that, he’s the one KU big man — of the four available — who played any real minutes last season. Zach Clemence was close but injured too often. And Zuby Ejiofor and Ernest Udeh Jr., are true freshmen.

Clemence easily could get the nod because his size and length might be a little more useful when KU lines it up for real starting next Monday night.

But I still think it’s Adams in this one.

For one, I think there’s some real intrigue surrounding what that lineup would look like and how effective KU could be by switching defenders at all five spots and flying up and down the floor as often as possible. And that’s not just with Adams playing the 5. If they like what they see from that group, you could possibly see some instances when Jalen Wilson plays a little at the 5 throughout the season, as well.

For two, KU assistant coach Norm Roberts, while filling in for Self on “Hawk Talk” the other night, absolutely gushed about how good Adams has been this preseason.

Time will tell. And, after that, even more time will tell if it wound up meaning anything.

Tonight’s tipoff is slated for 7 p.m. from Allen Fieldhouse and the game will be televised by ESPN+.

Matt, any chance we can get the 2022-23 schedule up? Website still shows last year.

Thanks for asking. We're really close to unveiling a site redesign, with a new, fresh look and some fixes to things that have been an issue with this site for several months. Very excited about it. It looks great and I think you guys will like it a lot.

That's the reason we don't have the schedule updated yet. So keep a look out for the switch any day now and that'll have everything you need. Feel free to hit me with some feedback, too.

Thanks for your patience! - Matt