Through KU's first 3 games, junior forward Jalen Wilson following nicely in Ochai Agbaji's footsteps as a scorer and a leader 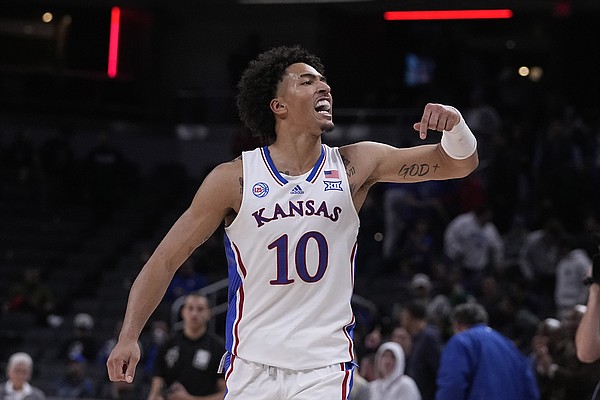 Kansas forward Jalen Wilson (10) reacts to a scar against Duke during the second half of an NCAA college basketball game, Wednesday, Nov. 16, 2022, in Indianapolis. (AP Photo/Darron Cummings)

I hesitate to make the comparison because of everything that Ochai Agbaji went on to do during his final season as a Kansas Jayhawk.

But if you haven’t at least thought briefly about Ochai while watching Jalen Wilson go off to open the season, I’m not sure you’ve been watching closely enough.

Wilson added to his stellar start with one of the best all-around games of his career on Tuesday night in leading No. 6 Kansas past No. 7 Duke at the Champions Classic in Indianapolis.

Wilson scored a career-high 25 points and added 11 rebounds and five assists. At times, he carried the Jayhawks (3-0), willing them to early leads and doing enough to keep them close as Duke threatened to take control in the second half.

Like Agbaji a season ago, Wilson has been nearly just as good and just as aggressive on the offensive end as his former teammate was last year during KU’s first three games this season.

“I see a little bit of that,” acting Kansas coach Norm Roberts said this week. “Jalen’s done a great job of taking the leadership role and helping the guys every day in practice but also trying to get us off to good starts and being aggressive when he can be.”

Roberts said there’s no doubt that some of Wilson’s assertive start is owed to watching what Agbaji did a year ago in leading the Jayhawks to a 34-6 record and a national title and becoming a first-team All-American. But some of it is about how his role has changed and what this particular Kansas team needs Wilson to do.

“Coach (Self) wants him to do that,” Roberts said of Wilson looking to score from the jump. “That is part of his role. He needs to do that.”

Through three games, including the big one on Tuesday night, Wilson is averaging 21.7 points per game and 10 rebounds per outing. He was just a couple of rebounds shy from averaging a double-double for the entire NCAA Tournament last season, so in that way, he picked up where he left off. But, offensively, Wilson has shown extreme comfort in stepping into his new role as this team’s go-to scorer.

“I just have confidence in myself, but it all comes in confidence from my team,” Wilson said after Tuesday’s victory. “They go to me. I go to them. And it just works like that. I’ve put in the work that I need, and I think we all have confidence in each other.”

After hitting 6 of 13 shots from 3-point range (46%) in KU’s first two games, Wilson missed all seven attempts from downtown in Tuesday’s win over Duke. In fairness, nobody from any of the four teams in Indy shot it very well from the outside. But it was what Wilson did from there that really mattered, and his response to the off-shooting night was the latest evidence that we’re watching Wilson shape his game in a new way in real time.

“Jalen’s whole game has matured,” Roberts said after the win over Duke. “Everything about him. Two years ago, he would’ve kept shooting 3s.”

Instead, he kept attacking.

Wilson attempted 26 shots in Tuesday’s victory and not one of them could be considered a bad shot. Some of them missed badly, but that’s different than taking a bad shot.

In all three Kansas games so far, Wilson made it clear early that he would threaten his career high in scoring, and he’s playing at a pace that makes you think he likely will continue to do that no matter what the number is or who Kansas is playing.

“I used to tell all my friends during the summertime, ‘Watch out for Jalen,’” KU point guard Dajuan Harris Jr. said earlier this week. “He’s been grinding every day. He’s been leading us and he knows what he needs to do. If he keeps scoring and leading us in rebounding, I think he could be one of the best players in the country.”

Wilson certainly looked the part on Tuesday night, and he had no problem sharing some of the credit for that after the victory.

Much in the way that Agbaji’s scoring prowess early last season opened him up to become the leader that team needed, Wilson seems to be following a similar path this season.

“Of course, we’re definitely different,” Wilson said. “But one thing I was fortunate to have was guys like Ochai, guys like Dave (McCormack), leaders that showed us how to talk, what communication I need to have and what communication the team needs to have. Just having Ochai and seeing his leadership skills and the work ethic he put in and his contribution to our team is definitely something I’ve taken (advantage of).”

I hear ya, Matt. He does improve his shooting. Let's hope JWil's hot shooting is not going luke warm as season goes. Today, we will see...

He looked good. He gave it all he had, and left it all on the floor.

I think Jalen will actually be a more consistent scorer then Ochai, because he is not dependent on the long ball. I am pleasantly surprised by his leadership. Early in his career, I misread him as someone who was selfish. I was totally wrong. He is legit.

Note that, he scored tons of 2nd chances, thanks to his ability to hustle on O-rebounds. Experience, confidence - matter. He's not trying to be fancy. Oh, I want to see his 5-footers or any jumpshots made increase this season. He's in the right trend (I can just forget about his dunk effort for now.. lol). One other improvement I notice is his decision making, his assist#. Sure, he still does that stupid pass while turning, but he's started to involve others, too.

His Pro career {and our success this season} is going to be dependent upon hitting outside shots and 0 for 7 will not get it done. And it was not just the misses, but many were in rhythm and uncontested. As I understand it, he returned to college to work on his outside shooting. His overall floor game kind of makes up for the misses. but 26 shots is a lot especially when he only makes 11. He could have scored 40. Loved his all out energy and no doubt, his leadership, along with Dajuan, will be critical to our success.