Another new banner expected to be unveiled at Allen Fieldhouse during Thursday's exhibition game vs. Pitt State 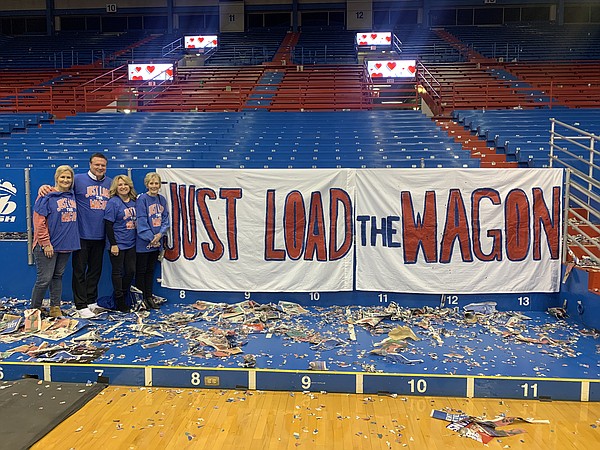 Kansas coach Bill Self, second from left, is joined by his sister, Shelly Anderson, left, his wife, Cindy, and his mother, Margaret, by the new banner that hangs in Allen Fieldhouse to honor a favorite phrase of his father's, Bill Self Sr., who died in late January at 82. by Contributed photo

The Kansas men’s basketball team will be ushering in a lot more than just another season of college hoops on Thursday night, when they play host to Pitt State in the lone exhibition game of the 2022-23 season.

Tipoff is slated for 7 p.m. at Allen Fieldhouse and the game will be televised on Big 12 Now via ESPN+.

In addition to Thursday marking the debut of the 2022-23 team, KU is teasing the fact that another banner will be unveiled at the Pitt State game.

Almost exactly three weeks after KU celebrated the addition of the 2022 national champions banner being raised into the Allen Fieldhouse rafters, KU will be adding some more fabric to the west side of the building on Thursday night.

Most seem to believe that this will be the “Just Load the Wagon” banner, which showed up late last season behind the south basket in the student section and paid homage to a favorite saying of Self’s father’s.

Bill Self Sr. passed away during last season’s championship run and the phrase — “Don’t worry about the mules, just load the wagon” — became a rallying cry of sorts for the 2021-22 Jayhawks’ march to the championship.

That was not the first time the phrase became popular around Kansas basketball. Back in 2017, when Self was inducted into the Naismith Memorial Basketball Hall of Fame in Springfield, Massachusetts, that was the quote he asked to have inscribed on the inductees’ bench outside of the Hall.

His father was there that night for his son’s induction, and the quote has been popular in Kansas basketball lore ever since.

If that is, in fact, what this new banner says on Thursday night, its inclusion in the Allen Fieldhouse rafters will be reminiscent of the “Pay Heed All Who Enter, Beware of the Phog” banner that hangs high above the championship banners on the north end.

Like the “Load the Wagon” banner, that one also was created by KU students in makeshift fashion a few decades earlier.

Stay tuned to our coverage from Thursday’s game for more on the identity of this new banner, which will hang above Section 17 on the Fieldhouse’s east side.

As you can see in the tweet below, it’s already up and has a blue cover over it, keeping its identity a secret until showtime.

Rumor has it another banner is being unveiled on Thursday 👀 pic.twitter.com/caZaYGzdN4