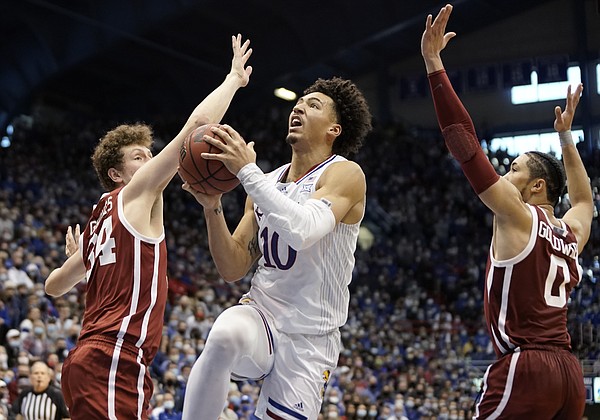 Kansas forward Jalen Wilson (10) elevates to the bucket between Oklahoma forward Jacob Groves (34) and Oklahoma guard Jordan Goldwire (0) during the second half on Saturday, Feb. 12, 2022 at Allen Fieldhouse. by Nick Krug

As NBA draft hopefuls make their cases in Chicago at this year’s pre-draft workouts, questions about all kinds of college basketball rosters are hanging in the balance.

At Kansas, those questions most often center around the stay-or-go status of junior guard Christian Braun and red-shirt sophomore forward Jalen Wilson.

From everything I’ve been told, Braun killed his workouts in Santa Barbara, California, this month and he heads to Chicago looking to make a serious statement about his draft status.

Already projected as a first-round pick by many analysts, Braun could cement his status with a strong showing at the pre-draft combine, today through Sunday.

I still think there’s an outside chance Braun could return, but the odds, at least in my mind, are lower today than they were a few weeks ago. The more I’ve heard and thought about his situation, the more I’ve started leaning toward him staying in the draft. Still, it remains all about the feedback he gets and that feedback will be based largely on his performance in Chicago.

Wilson’s case is a little different. Unlike Braun, he did not receive a combine invitation. Instead, he was invited to the G League Elite Camp for the second year in a row. Generally speaking, not getting invited to the combine, which has 76 participants this year, does not bode well for one’s draft prospects. The draft, in most years, has 60 picks. This year it only has 58 because of penalties taking two picks away.

I’ve always thought Wilson’s odds of returning were pretty high anyway, and him missing out on the combine invitation only furthered that belief. He did, however, show well enough at the camp to earn one of seven invitations to the combine, which is a significant development in Wilson’s testing process.

Today, more than ever, it feels like Wilson is in a heck of a win-win situation with his decision.

The forward from Denton, Texas, can do himself a lot of good by returning to KU for another year. And, thanks to the NIL opportunities out there, he can make himself some decent dough, too.

More than that, though, a decision to return would put him in fairly rare company. Only he and Dajuan Harris Jr. would be returning for the 2022-23 season with 100% certainty about what their roles would be.

Both were starters on a national championship team. So the talent’s there. But knowing their roles, being comfortable in them and having their expectations so clearly defined from the jump can only help both of them in their quest to further showcase their game for professional scouts.

Being comfortable with his role worked wonders for Ochai Agbaji a season ago. Sure, the reigning Final Four MOP improved a ton and became, in many ways, a different player than we’d seen before. But a lot of that was mindset stuff and a shift in approach, born from the feedback he received at the combine. The fact that he knew what his role was at Kansas allowed him to be comfortable enough to take those strides toward greatness and eventual first-round status.

Wilson, should he return, would be walking into a similar situation.

Talk about a perfect situation to thrive.

It might not mean that Wilson becomes an All-American and Big 12 Player of the Year like Agbaji did. But he’d at least have a chance. The rest would be up to him, dependent on him putting in the same kind of work and attention to detail that Agbaji did to become great.

Wilson’s driven like that, so I wouldn’t bet against him. But I’m not sure it’d be the smartest thing to expect a repeat of what we saw from Agbaji either.

Regardless, being comfortable with the role he knows he has at Kansas would pave the way for Wilson to make a big time jump. Whether he would do it or not is anybody’s guess. But you can’t ask for a much better situation than the one he has waiting for him at KU if he decides that making the move to the pro ranks is not for him just yet.

If there’s enough momentum around him staying in the draft and the feedback he gets from NBA execs in Chicago tells him that he would be selected, then that could quickly become the favored move by Wilson. And it would be awfully hard to blame him for making it.

The best mock draft out there — Jonathon Givony’s at ESPN.com — still does not have Wilson on the 58-pick prediction. So he may still have work to do to prove that he’s worthy of being selected. But he now has an even better opportunity to do just that, given that he gets to stick around Chicago for the remainder of the week.

Both Wilson and Braun have until June 1 to make their decisions on whether to stay in the draft or withdraw and return to school. While that date looms large, the rest of this week and what those two find out is even bigger.

Is it possible that Jalen moves more into CBs spot as a 3? There might be more and better 2-3 options than 4-5 options so maybe not. Not sure if there’s a significant difference in the role of CB vs his own last year in the 4 around 1 offense Coach used and has been using a lot lately.

He would definitely assume the leadership position and we’d need it, even if Coach does get a big transfer recruit.

While I provided a counter question, I probably should have started with agreement and appreciation for a well written article. Lots to like, except the proposition of losing everyone but Harris.

Sets up a COTY potential for Self, after a complete reload. That could really chafe some ncaa leaders as a follow up to the NC for the “KC Jayhawks”.