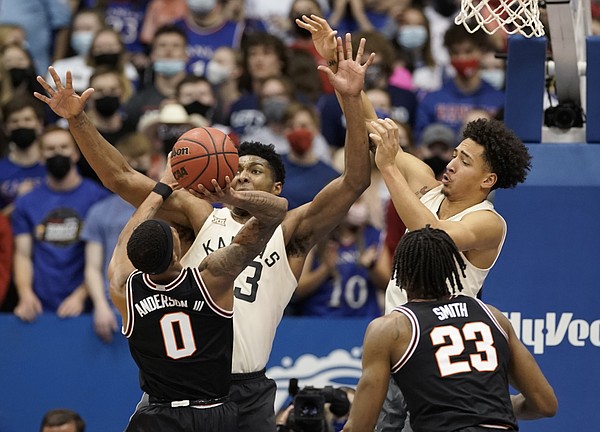 Today marks the beginning of showcase week for dozens of NBA draft hopefuls.

First up: The 44 players who were invited to the NBA’s G League Elite Camp in Chicago will get their two-day event under way.

Included on that list are Kansas national champions David McCormack and Jalen Wilson. Despite carrying the option to return to college for the 2022-23 season, both declared for the draft earlier this spring.

Wilson made it clear that he was testing his draft stock and that a return to KU was still on the table. McCormack did not reveal whether he was planning to go all-in or still entertaining a return to school. Either way, both will know about their futures in the next couple of days.

While the G League Elite Camp will feature interviews with NBA and G League executives, as well as skills tests and player measurements, the most important part of it will be the five-on-five scrimmage sessions that take place. Over the weekend, the rosters for the four teams who will compete in those scrimmages were made public.

As expected, McCormack and Wilson were on separate squads. Each team will feature 11 players and be led by three coaches from the G League.

Wilson’s squad — Team #1 — will be coached by Coby Karl, Jeff Newton and Arinze Onuaku. Wilson will wear jersey No. 33 during his G League Elite Camp action.

McCormack’s squad — Team #4 — will be coached by Seth Cooper, Derrick Alston and April Sykes. McCormack will wear jersey No. 44 during his G League Elite Camp action.

Both Jayhawks are hoping to do enough at the G League camp to earn an invitation to stick around Chicago for the NBA combine, which gets going fully on Wednesday and runs through the rest of the week.

McCormack and Wilson teammates Ochai Agbaji and Christian Braun received NBA combine invitations and were headed to Chicago on Sunday.

KU coach Bill Self is also expected to be in Chicago this week to support four of the five starters on the 2022 national championship team.

Agbaji was in Lawrence on Sunday to participate in KU’s 2022 commencement ceremony.

This is what it’s all about, man.

Interesting that with so many players exhausting their eligibility this year, Ochai’s the only one graduating. It is good to see Wayne walk down the hill.

With the spread between eligible draft spots & number declaring, a lot of these guys have to know they aren't going to get drafted, especially if they leave early. What's the thinking, "Hey, I'm never going to get any better so just going to declare?" I supposed here at KU we are spoiled, because we have a coach who takes average players and turns them into All-Americans, and that doesn't happen at a whole lot of schools.

Maybe it's more about getting invited to the combine, showing off your skills, and playing outside the country. D-Mac would be a sure pick if he were reliable beyond 6-8 feet. J-Wil I think might have a better chance, multi-dimensional, though his 3-pt shooting as of late may hurt him a bit.

Either way, I think both of these guys are gone, and probably should stay gone in that coming of a natl championship team, their stock is riding as high as it will get.

But what do I know, I make one out of 10 free throws on a good day.

Dirk - I thought the same thing but then remembered that Lightfoot, McCormack, Remy Martin and Jalen Coleman-Lands all had already graduated and were working on postgrad degrees.

Agreed Matt. I was just too lazy to look earlier? Have Cam and Chris graduated as well?

Armen - Very valid thoughts and honesty. It seems the motivation is very similar to JWil last year; get feedback.

Also interesting relative to Wayne in the graduation a decade later. At the time, I think a lot of people questioned his decision to leave early. Guessing there was more that went into the decision than any of us know about. It seems to have worked out well for him.

Maybe JWil follows the same path. It’s almost silly not to declare if you have any aspirations for pro play. Is there any down side to getting pro feedback? Completely agree on 3, and that to me is a reason to return, unless he’s convinced he can’t shoot better 20-whatever %. Jr year is the crucial time to decide (Wayne). Very true about going out on top, though 2 > 1. 😎

count me in the minority who think that "going out on top" is overrated. These guys who are 19, 20, 21 years old they have a whole career ahead of them in something, whether it's pro-ball or a more traditional professional career.

Being a college athlete is a once in a lifetime opportunity, and now you can make millions on NIL rights to boot.

Sure they got a lot of exposure in March madness winning the championship, but return to college and next year you will get much more exposure than this year regardless of how deep in the tourney they go.

I think that going out on top is probably a great way to go if you are ending a veteran professional career, or a coaching career, but if you are a member of the KU basketball team, you can't go wrong by staying another year.

Think about being a G Leaguer next year compared to playing in AFH and getting NIL rights.

Unless you are confident you will make an NBA roster, and/or willing to take that gamble then why take the risk when coming back to KU is a sure thing.

a bird in the hand is better than two in the bush.

Jonathan - Generally agreeing with you though the asterisk that needs to be attached this year is the looming penalties. If it includes a postseason ban, then it’s a game changer.

There will be penalties, but I don’t think they will be as bad as some have speculated, and won’t include a postseason ban. Fine, suspension, and scholarship reductions, but not a ban. There have been several smoking guns in recent years that the ncaa has been unable to prove anything regarding and they’re now trying to play catch-up for their past failures just like they did to Silvio. Even in-house, they had to cut his penalty in half, and even that was unprecedented. It was also self-imposed as was our handling of the previous unsubstantiated smoke. I think that all works in our favor now that people without any misplaced corn cobs are leading. They’re currently trying to figure out what will appease the ncaa. $0.02