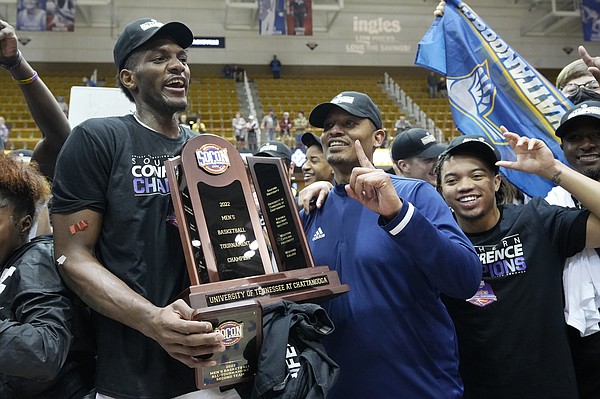 Former Kansas forward Silvio De Sousa is headed back to the NCAA Tournament for the first time since helping the 2017-18 Jayhawks reach the Final Four as a freshman.

An overtime buzzer-beater from well-beyond 3-point range gave the Mocs a one-point win over Furman, setting off a wild celebration featuring an elated De Sousa and his new teammates.

When the game-winner from David Jean-Baptiste fell through the net, De Sousa collapsed near mid-court, arms and legs sprawled out as if he was preparing to make a snow angel.

“I think it was the very first practice, I remember telling the guys in the locker room, ‘You think playing ball in fun? Just make it to the NCAA tournament, you’ll have a lot more fun,'" De Sousa said Monday night after his team's thrilling 64-63 overtime win. "I just hope they will get to enjoy it, and just have the fun I once told them about.”

Chattanooga won both the regular season and Southern Conference tournament titles and is projected in ESPN Bracketologist Joe Lunardi’s latest bracket as a No. 13 seed in the upcoming NCAA Tournament.

That likely puts to bed any theories about De Sousa facing his old team in the Big Dance. But him being there at all is a success story in and of itself.

The one-time promising five-star recruit from Angola, who came to KU a semester early, never lived up to the expectations many people had for him at Kansas.

After a great start in which he played an important role in helping the Jayhawks reach the 2018 Final Four, filling in admirably for injured big man Udoka Azubuike, De Sousa never got back on track.

Remember, this was a guy who was on the floor for much of the overtime in KU’s Elite Eight win over Duke that year.

That was about it in the way of highlights, though.

From there, DeSousa’s KU career hit hard times after a series of rough patches — ranging from his name surfacing in the FBI case to the infamous brawl with Kansas State and an incident outside of a Lawrence nightclub in which he was later cleared of any wrongdoing — kept him off the floor and ultimately led to him leaving the program and landing at Chattanooga as a graduate transfer.

Even from afar, he remained close with several of his former KU teammates and some of them hopped on Twitter on Monday night to share their support.

While no one quite expected his college basketball path to play out the way it did, there was De Sousa, dropping 17 points and 14 rebounds in a do-or-die postseason game for his new program on Monday night.

The performance marked his sixth double-double of the season, tied a career-high for rebounds and was the first double-double in the Southern Conference title game in 27 years.

His career might not have played out at all like he hoped it would while at Kansas. But it sure seems to be ending on a high note.

De Sousa was named to the SoCon All-Tournament team this week, and the next game he plays in will be his sixth career NCAA Tournament game and first in four years.

I tuned in to just catch the beginning of the game and discovered Silvio playing as I had lost track of him; so, I recorded the game to watch later and glad I did. He is a force abasing this competition.

Good for Sylvio. I hope that they can score an upset or two in the big dance.

He really had a rough set of circumstances, but it seems that he's hung in there. I hope that he graduates, if he hasn't already graduated and best of luck to him in the future.

That all said, it may be technically true that he was "cleared of wrongdoing" for his role in battering that guy outside of the bar, but if my memory serves me it seems like the more accurate description was that he was cleared of criminal charges. I don't recall the details... it seems like the court dropped the charges, or the case was settled outside of court... but I don't think that the case ended up in a diversion program agreement...

Either way, I don't think that the guy on the other end of the dispute was ever going to regain sight from one eye. Sad circumstances all around. I'm not sure if the best thing to come out of it may just be that everybody involved learned a lesson, as unsatisfying as that may be for some

Jonathan - The article says that Silvio was a graduate transfer. That means not only has he already graduated, but that he graduated from KU. And do we really need the slander when you admittedly don’t really know what happened?

Huge hat tip to Silvio for persevering through his own mistakes and those around him. Sounds like he’s providing some valuable leadership as well. Huge game and hope he has many more.

thank you for pointing that out. I had overlooked that statement that he landed at Chatanooga as a grad transfer. That in itself is a testament to De Sousa's work ethic that through it all he still managed his academics and completed his degree at KU.

That said, I wasn't slandering anyone. I'd said it in the articles about the incident. De Sousa clearly suffered consequences for his actions. Ultimately he was not convicted which was the best case scenario for him in that newsworthy situation. Unfortunately his fist or open palm did cause permanent vision loss to the individual who reported the incident. I don't think that it was ever in dispute whether or not De Sousa hit the guy and caused his loss of sight in one eye. Many commenters on this website took hardline positions against De Sousa based on the facts of the case. I never did. Based on the information available to the public my determination was that it was unclear who was specifically at fault for the fight, but that it was most likely that there was plenty of fault to go around. I always wanted De Sousa to be succesful at KU. I still feel that compared of other KU players who left KU in the midst of bad circumstances, De Sousa was in relatively good standing and more the result of a streak of "bad luck" as far as the FBI investigation and the ridiculous NCAA eligibility position, the KSU fight, and the bar fight.

Thanks for the story Matt.

Sounds like Silvio got a lot out of his time at KU (degree, FF, development, leadership). It is good to hear about the successes of former players.

Will his participation @ the KSU brawl be held against KU in this pending investigation?

Congratulations to Silvio and the Mocs. For his sake I hope KU and UTC don't have to face each other in the NCAA Tournament.

Him holding a trophy, instead of a stool over his head.

Sports, the thrill of victory and the agony of playing in garbage time, throwing a few punches, and threating to hit somebody with a stool.

Or defend yourself as necessary from being attacked from behind.

You left a few things out Dirk, here I will help you -

----- "... attacked from behind" after unnecessarily standing over a KSU player he hammered going for a layup with 11 seconds to go in the game, with a 20 point lead mind you.

In front of the K-state bench.

Then when disarmed of the stool (no one else in the fight needed), he chases another player 20 feet and stomps on him. Even when all KU players are behind him and safe as a result of his actions to start the brawl.

He was not defending himself, he was in a fight he started.

It's on video if you need to refresh your memory.

Even for you Dirk your unconditional defense of him is ridiculous.

I'm glad he has turned his life around. Do we know if KU could still be hammered for anything he or his handlers did that the FBI was working on?