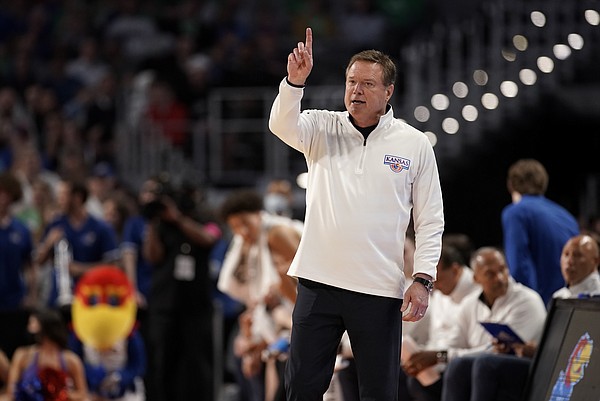 Kansas head coach Bill Self calls out a play during the first half on Thursday, March 17, 2022 at Dickies Arena in Fort Worth, Texas. by Nick Krug

Fort Worth, Texas — Kansas fans have been known to keep a close eye on the wins race at the top of the college basketball period between their Jayhawks and the Kentucky Wildcats.

But after 2nd-seeded Kentucky lost in overtime to No. 15 seed St. Peter’s on Thursday — a couple of hours before top-seeded KU polished off Texas Southern with ease — their tracking of the standings reached a fevered pitch.

Kansas, with 2,352 all-time wins, is now just one win shy of Kentucky at the top of the list.

North Carolina, which is also still alive in this year’s NCAA Tournament, — as a No. 8 seed that will play top-seeded Baylor in the early game in Fort Worth on Saturday — is third on the list with 2,319 all-time victories.

As the Dickies Arena video board showed the final seconds of UK's overtime loss on Thursday, hundreds of Kansas fans awaiting their team's tipoff inside the building let out a huge and approving roar to celebrate UK's loss.

Kansas has made up a closed the gap at the top by a whopping 18 games in the past three seasons.

The 29-6 Jayhawks will get an opportunity to tie the Wildcats at 1:40 p.m. Saturday in a second-round matchup with No. 9 seed Creighton at Dickies Arena.

A win there would give KU the opportunity to really rub some salt in the wound of taking over the top spot. Not only would another win in the Sweet 16 do it, but every win from there on would move KU further ahead of the Wildcats while also advancing the Jayhawks deeper in this year’s NCAA Tournament.

Fans of both blue blood programs have shown that they love tracking the wins race, another way the two rivals can measure up against one another. Kentucky’s athletic department boasts of their position on top on the front page of all of their men’s basketball game notes, pointing out both the total number of wins and that it’s the most all-time in big, bold letters and numbers.

Perhaps Kansas will do the same if it moves into the top spot. Maybe not.

But as of today, it’s the Jayhawks who have a golden opportunity to take over the top spot. And if they do, they’ll hold onto it for the next several months, as the Wildcats’ season is over and they will not be able to add to their win total until November.

Here’s a quick look at the season-by-season breakdown of Kansas and Kentucky victories since Bill Self took the reins in Lawrence for the 2003-04 season.

Kansas under Bill Self has also been very consistent year to year. Nineteen consecutive years with at least one win in the tournament. In the tournament every year since 1990. Calipari took his team to a first-round blowout loss in the NIT not too long ago. Etc.

I'll take Coach Self, too. So, +17 and counting vs Calipari, and even more than that vs Kentucky since taking over at KU. I'm too lazy to check, but am thinking it's in the 40-50 range.

Actually, it's right there in the piece above (looks like +48).

Kansas is also clearly in the lead over Kentucky by 157 games in the loss column.

Proving once again that futility should be rewarded.

If we hold the most wins record outright, we will lead Kentucky in not one category but three. Most games lost, most wins and most games played between the two Bluebloods to beat them to the top.

Don't forget to celebrate all 3 out there. Remember we could not have reached the top of Candyland without losing 157 more games to do it. Think of it as just a few more chutes to get to the top. More bites of the apple, a few extra swings. Its not cheating if you win right?

Wear all 3 crowns proudly, not just the 1. We have earned them all.

I'll let you wear the other two crowns for the rest of us Rodney. You wear them so consistently and well. (Typed with a smile, not malice!)

Ummmm, why would you celebrate losses?

Once again, it took Hank more seasons, Dickerson more games, Maris more games, and on and on. It’s a simple, singular stat, just like all stats. Absolutely worth celebrating. Certainly not as ridiculous as the nimrods who wanted to fly a Championship banner two years ago.

Kevin someday if I can I will let you in on what is happening everytime you call me Hot Rod. You have made our weekend, please keep it up man.

That's awesome, I'm glad he likes your new nickname! Anything that keeps the fire raging, Hot Rod! I'll use it from now on...forever and ever....but please, you can save the details, I'm good!

You know I get so many laughs from you clowns.

Brett I am going let you pass. Just having you with the most wins crowd is more than enough support for me. So Thank you.

Kevin I stay away from parties seen enough of red cups and puke, I am a close friends, in warm places kind of guy. I get enough of fools on this place without having to talk about their favorite tik tok videos. You guys are laugh out loud funny. Really I mean very very amusing.

Perhaps we should add a fourth category as well -- games vacated or forfeited, seasons canceled, etc. UK would surely come out on top of that as well. 😎

Garry you bring up an interesting point. I like it. When Larry left did we lose any games though?

Well if more than one record report how about % wins of games played. Another one for those wanting to create comparisons.

We should do "coaching tree" wins. That one wouldn't even be close.

That would be interesting David

It would get confusing with someone like Calipari - do wins as an assistant (at KU) count the same as wins as a head coach (at UK)?

Matt, could you provide a link to such a Kentucky publication that shows them touting their win totals?

Here's one from this year...

A couple from last year...

That's just the tip of the iceberg. Trust me, they care every bit as much as KU fans about this down there. Quite possibly more.

Matt, Let's say they do care for argument's sake.

If they claim most wins, why would anyone there care that they had done it in less games and with less losses?

When we achieve most wins, don't you think they will post about how we needed 150+ more games and have lost more games to get it?

We cannot claim most wins without the reference that we played longer 4 years, 157 more games and have lost more.

If you gave them 157 more games to catch up to us, how many wins would we really be behind them? At least 100.

I suspect Matt didn't write this article for the people who care about the win total stuff. I suspect he wrote it to piss off the few people who can't help but get their panties in a twist about it.

I'm kidding of course, Matt always takes the high road. That said, thanks Matt for needling the people who tend to get needled over everything. It's fun.

Thanks Matt I love this. I expect a celebration article when we get to the top of Candyland.

All of you I love this. I can't wait for the next round.

Let's win tomorrow and start all over again about being tied with UK for most wins. lol!!!

To really put it in perspective, since Calipari was hired in at Kentucky in 2007, KU is +38.

Brett - Some people might look at a loss as a negative. Others just see it as part of reality and therefore worthy of being celebrated. Sorta like Seinfeld’s Bizarro world. It’s not a reality most people live in, but we all need to be accepting of others.

Speak speaking of consistency do y’all realize that before this year Duke had not won the ACC regular conference championship since 2009? …and North Carolina only five times in that span. Whereas, Coach Self has won our conference almost every year.

Speaking of consistency, the Big 12 is 6 - 0 in the first round in the Big Dance this year.

Here's a meaningless but interesting record -- The Most Basketball Games Played as of 03/18/2022:

Sorry that this didn't end up like I had printed it.