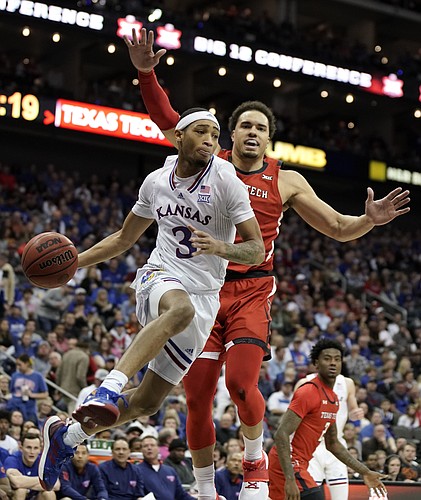 Kansas guard Dajuan Harris Jr. (3) looks to whip a baseline pass as he is defended by Texas Tech forward Marcus Santos-Silva (14) during the second half of the Big 12 Tournament championship game on Saturday, March 12, 2022 at T-Mobile Center in Kansas City. by Nick Krug

Topeka — Although it’s not officially listed on the Kansas basketball schedule for the 2022-23 season yet, the Jayhawks know that at some point during the upcoming season, they’ll be heading to Columbia, Missouri, to take on the Missouri Tigers.

That matchup, wherever it lands on the schedule, just became even more exciting than it already was for Columbia native and current KU point guard Dajuan Harris Jr.

That’s because on Monday, Harris’ good friend Isiaih Mosley committed to the Tigers.

When asked about what Mosley’s addition does to the KU-Mizzou showdown during the upcoming season, Harris could hardly contain his smile.

“We were talking yesterday on the phone and I already told him, ‘All that stuff you think you’re (going) to be doing, it ain’t working. We’re going to lock that up,’” Harris said between sessions at Washburn basketball camp on Tuesday.

There was some thought this offseason that the Missouri State transfer guard could be reunited with his lifelong friend and former Rock Bridge High backcourt teammate on the KU roster for the 2022-23 season. But Mosley never visited Kansas, and the Jayhawks reached their scholarship limit when Kevin McCullar Jr. transferred in and Jalen Wilson decided to return for his junior season.

Mosley then chose between Mizzou and Mississippi State after receiving interest from KU, Kansas State, Texas Tech and others throughout the process.

Harris never said much about what landing Mosley would have meant to him, but it’s clear that playing against him during the 2022-23 season will be nearly as big of a thrill as playing with him.

“That’s my best friend,” Harris said of the 6-foot-5 guard who averaged 20 points per game on 50% shooting from the field and 42% shooting from 3-point range last season. “We’ve been playing together since fourth grade. We know a lot about each other. We’re just going to have fun, though.”

So, too, will the crowd at Mizzou Arena.

As if defending national champion Kansas coming to town wasn’t already a big enough deal, the idea of two Columbia natives doing battle on the floor on what figures to be a national stage surely will add to the day’s buzz when it arrives.

Asked Tuesday what he thought about returning to his hometown for a game of that magnitude with his best friend, Harris said his focus would be entirely on the task at hand.

“That’s home,” he said. “I’m going to have a lot of people there, but I ain’t going to be too busy on the crowd. I’m going to be focused on the game for real.”

As for whether the two Rock Bridge alums would be matched up against each other on game night, Harris said he was up for anything.

A fairly std interview lit up when Mosley was brought up. It’s fun to see Harris’ “I’m going to shut you down” mentality, and exciting to see him paired with Kevin.

It was also nice to see a video previewing next season refer to Dajuan as an elite defender. While that’s not necessarily new to those that follow the program, it was nice to see it recognized nationally.