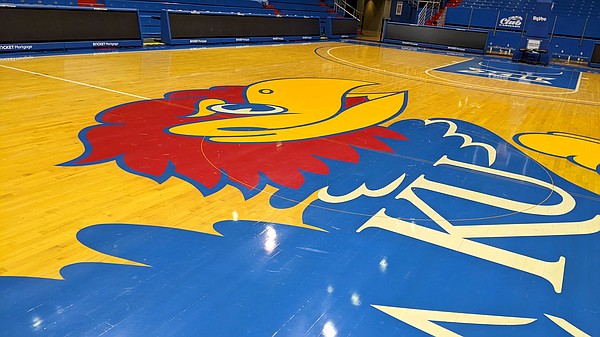 The Kansas Jayhawks logo as seen at center court at Allen Fieldhouse on March 6, 2022. by Zac Boyer

It’s also time for the next crop of Jayhawks to start making their way toward Lawrence for the beginning of summer school and summer workouts.

The first summer school session beings Tuesday and it looks as if half of KU’s incoming class of freshman will be on campus in time for the beginning.

Gradey Dick, a 6-foot-7 wing from Sunrise Christian, is slated to arrive this weekend, in time for the start of summer school and KU’s first team workout on Monday.

Big man Ernest Udeh, a 6-10 forward from Dr. Phillips High in Orlando, is also expected in this weekend.

MJ Rice, a 6-5 guard from Prolific Prep in Napa, California, and Zuby Ejiofor, a 6-8 forward from Garland, Texas, are both awaiting graduation and are expected to arrive late next week.

All four freshmen will have a chance to show they belong in the rotation in Year 1. But it’s hard to envision all four of them actually being in the rotation. Dick and Rice almost certainly will. And then it seems as if Udeh and Ejiofor could be battling for one spot that gets minutes and one spot as a deep reserve.

Kansas coach Bill Self is hosting his first camp of the summer next week, which should give us a chance to talk to some of these guys and get a look at how guys might fit into the 2022-23 rotation.

It’s still way early, though, and there’s no doubt that putting together the rotation will be a work in progress that runs into November.

I could see putting together the rotation being a work in progress that runs into December and maybe even January. Obviously some things have to be decided in November but it wouldn’t be unprecedented for it to continue for months.

This is just one of *many* reasons this place is so special…@youngoch left a note and we—🥹@gradey_dick x #kubball pic.twitter.com/osQxnF6yvg