Now that he's back, let's examine what that could mean in NIL dollars for Kansas forward Jalen Wilson 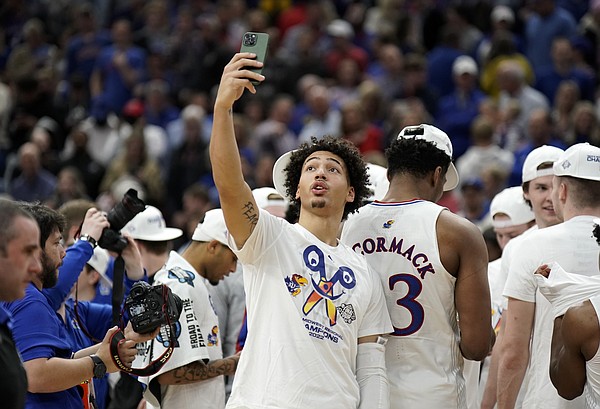 Kansas forward Jalen Wilson (10) shoots a selfie as the Jayhawks celebrate their 76-50 win over Miami to advance to the Final Four. by Nick Krug

Jalen Wilson’s decision to return to Kansas for his junior season figures to come with plenty of name, image and likeness opportunities in the next 12 months.

But what might those look like, how high can the dollar amount climb and how does that stack up to what Wilson could have earned if he had made the jump to the next level?

We haven’t heard from Wilson yet, so we don’t know exactly how important the NIL stuff was in his decision. But it’s hard to imagine it did not play at least some kind of a role. The NIL phenomenon is here to stay and it seems like it will be a factor for dozens — if not hundreds — of college athletes year after year well into the future.

The first and most important thing to remember about Wilson’s NIL opportunities at Kansas during the next 12 months is that the possibilities are endless.

We already know about deals he has struck in the past with J. Wilson’s, Wendy’s and Raising Canes, but there’s no reason to think that’s where it has to stop.

Wilson, as the face of the defending national champs, should have all kinds of opportunities to cash in during his junior season. Whether that’s more local and national businesses snagging him as a spokesman or the opportunity to link up with companies for some easy cash for a few social media posts, there is absolutely no limit on the number of businesses with which Wilson can strike deals.

Consider this: Former KU All-American Ochai Agbaji, who had the potential to earn all kinds of money last season, elected to pass on most of the opportunities that came his way in order to stay focused on the work on the court. And he still pocketed nearly $100,000.

So, to think that Wilson, who might also favor focusing on his game over cashing checks, could not reach that number as a defending national champion is off the mark.

Wilson’s earning potential likely will be three or four times that much if he wants it to be. And those deals with restaurants and businesses are only part of the story.

Remember 6th Man Strategies, the third-party NIL company that signed on to represent all 18 Kansas basketball players when NIL opportunities first became legal on July 1, 2021? They’re still around, and they’re still in the business of raising money to distribute to KU players as part of the NIL process.

It’s all in exchange for some kind of service — an autograph session, a meet-and-greet, dinner with the team, the postseason barnstorming tour, etc. — but it’s still big money for things these guys would’ve been doing for free in the past anyway.

Let’s do that math here real quick. 6th Man Strategies’ stated goal at the time its announced partnership with Kansas basketball was to find 100 donors to pledge $1,000 per month for any given year. The 100 Club they called it. If they get there — and the last I heard they had signed up about 50 right away without much effort at all — that’s $1.2 million per year to divvy up among the KU roster.

Now, no one is naïve enough to think that walk-ons Charlie McCarthy and Dillon Wilhite are going to get the same amount of NIL money as the all-conference starters, so let’s just assume a couple of things for the sake of this exercise.

That doesn’t mean he’s automatically going to lead the team in scoring or be the Big 12 Player of the Year, but it certainly could. For this, though, we’re going to call him that so we can assign value to his role.

And that still leaves you 75% of the pie to hand out to the rest of the roster.

Maybe the three next-best NIL faces are worth 10% apiece (or $120,000 per player) and maybe the next five are worth 5% apiece (or $60,000 per player). That gets you to 80% through the top nine guys in KU’s rotation, leaving still 20% to hand out to the rest of the roster — four more scholarship guys and four walk-ons — or to those top nine for other opportunities.

So how does that stack up to G League money? Pretty favorably, really. And it’s even more impressive when you consider all of the free exposure these guys get by playing on ESPN and other television networks all the time. No one in the G League is cashing in on that kind of brand-building.

The average G League salary for the 2021-22 season was $37,000. That’s for a player that just plays in the G League and does not have any roster bonuses or two-way dollars coming his way.

There’s also the $125,000 salary for what are known as “select players,” but these are generally given to the players who skip college and play for a team like the G League Ignite to kick off their pro careers.

Then there are the two-way contract guys. Each NBA team is allowed to sign two players to two-way deals and those start with a base salary of $125,000 and include a prorated portion of the NBA’s minimum salary — which is somewhere around $600,000 — for the time they spend on the NBA roster. Two-way contracts are not guaranteed in any way, however, and something as unlucky as a simple sprained ankle can cause a team to terminate the contract and grab another guy. So, while there is money to be made this way, it’s far from a guarantee and also is not automatically any more lucrative than what a player in Wilson’s position at Kansas can make in NIL deals.

There also are Exhibit 10 contracts in the G League, which offer up to $50,000 for players who spend at least 60 days with the G League affiliate on top of the G League salary. So that brings the total to $87,000 for the six-month season, without any additional money coming in from a potential NBA call-up.

Good money, to be sure, but the guess here is that Wilson will do better than that at Kansas in NIL deals. A lot better, in fact.

That’s a pretty good incentive to return to school, all while knowing that the chance to work on your game and improve in the areas NBA scouts want to see you improve could be leading you toward seven-figure money in the NBA just one year later.

Good info Matt. Wild to think that some students will leave with as much debt as the players have savings/income.

Kinda encouraging and not surprising at all to hear that Ochai passed on most of his opportunities last year to focus on the team/season. The $ will come and go but that championship is forever. The most accomplished since Danny.

For all the NIL deals, it’s situations like Jared’s that’s the best part of NIL. Hopefully there are more of those this year.

Interesting insights, Matt, thank you. I had no idea the NIL money could be that lucrative.

Amateurism in college athletics is a thing of the past. Wake up NCAA, you are archaic and will be non-existent when it comes to men’s basketball and football in the next 5-10 years. University leaders should realize that they can exert more control and generate greater revenue without the worthless oversight of clueless administrators within the NCAA. Let's be honest, as Matt points out college athletes on the KU basketball team are now unofficially paid employees who go to classes (?) – and that was even before NIL for some (why the NCAA cloud still hovers over Lawrence). Eliminate the NCAA and form a new organization between major college programs and call it what it is - semi-pro football/basketball leagues associated with a university/college. Players get paid a salary as they develop their basketball/football skills with hopes of making it their profession (for at least a while) and those who want an education can do so as well. The NCAA has completely lost control with little to no regulations associated with NIL and the transfer portal. They should just go away. The SEC, Pac, Big 10 leadership are seeing the bigger picture. Hopefully, the Big 12 leadership will also wake up before it is too late.

Um, the way it works with NIL Matt is you entice the player to come to the school, or back to school with NIL money first, then they sign a contract, than the player decides to play for you.

There is the driving while drinking thing for JW. A few groups steer clear if a DWI's and a few other relevant topics right now happen to be recent and public. You want people to buy what you are selling, not protest you because of your pitch person.

Remy's car should be floating around somewhere if he can swing it. A nil deal that costs them money is not perfect, beggars can't be to picky.

Since it is thunderdome time with NIL, and just about anything goes, we need a couple of deep pocket non-boosters to create a slush fund. Have them pay our guys and be done with it.

Kind of shocking to see so many on this site support the capilalistic opportunities presented to our student-athletes. I am personally happy to see them get paid. I believe they deserve it. I am mostly glad to see that the athletes who are performing the best are getting paid the most. That is how it should be.

How can 6th Man accept money from donors and then just distribute it to players? I thought NIL had to be part of a legitimate advertising agreement.