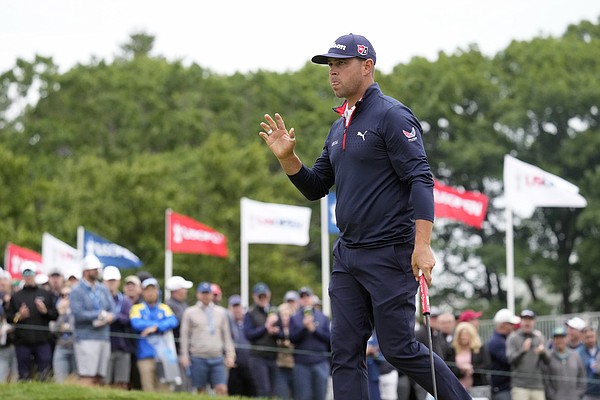 Gary Woodland reacts after a putt on the seventh hole during the final round of the U.S. Open golf tournament at The Country Club, Sunday, June 19, 2022, in Brookline, Mass. (AP Photo/Charlie Riedel)

After making the U.S. Open cut after Round 2 by a single stroke, former University of Kansas golf standout Gary Woodland rallied to deliver his fourth top-10 finish at a major championship.

Woodland’s 1-under-par 69 on Sunday landed him in a tie for 10th place at The Country Club in Brookline, Massachusetts, marking the fourth-best finish of his career at a major.

Woodland won the 2019 U.S. Open and finished tied for sixth and tied for eighth in back to back years at the PGA Championship in 2018 and 2019.

The Topeka native’s 69 on Sunday was the third time Woodland shot 1-under this week and it put him six strokes behind Matt Fitzpatrick, who won the event at 6-under.

After a strong finish to Round 3, Woodland opened Sunday’s round with a little trouble. He carded a double-bogey 5 on the par-3 second hole, which plagued him all week. Woodland recorded a triple bogey at the hole earlier in the week and also bogeyed and parred it, making him 6-over par on the 209-yard hole for the week.

Woodland responded to the double bogey with four consecutive pars and back to back birdies at Nos. 7 and 8. His hot streak continued with a birdie at No. 10 and he added a birdie at 17 and a bogey at 12 to finish 1-over on the back nine and even for the round.

In addition to cracking the top 10 for the fifth time this season, Woodland, 38, also collected a nice paycheck. His tie for 10th place was worth a season-best $407,220 and he’s now up to $1.9 million in earnings for the season.