Why I think Jalen Wilson and Kevin McCullar Jr. will both be in Kansas uniforms next season 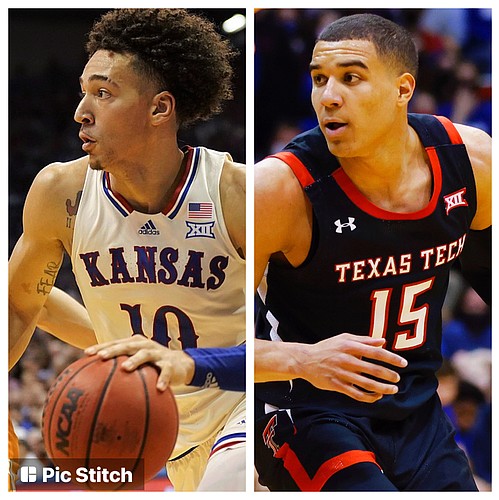 As long as they’re willing to share their decisions with the public, we should know sometime today whether Jalen Wilson and Kevin McCullar Jr. will be Jayhawks next season.

The guess here is that both will withdraw from the NBA draft pool and announce their plans to return to college to start together in the same Kansas lineup during the 2022-23 season.

Wilson and McCullar have until 10:59 p.m. (Central time) to officially inform the NCAA of their decisions. That does not necessarily mean they have to announce it to the public by then. Heck, they don’t have to announce it at all. But most players do, and it seems likely that these two will, as well — stay or go.

I’ve gone back and forth with my thoughts on Wilson’s decision more than any player I can remember covering. I’ve said from the beginning that it’s a win-win scenario for him. And I still believe that. But this one appears to have been a really tough process — in as many good ways as possible.

Wilson no doubt helped himself a ton with the performance at the G League Elite Camp and the NBA combine, but he may have been starting from a little too far back for it to make leaving Kansas the automatic choice.

He could go. Let’s not overlook that. I don’t think Wilson would be drafted, but I do think he’d catch on with a G League team and he could even wind up signing a two-way contract.

That seems to be the best-case scenario right now, though. And let’s remember one thing about two-way contracts: They can disappear in the blink of an eye. They are not guaranteed in any way, and if a player on a two-way contract gets injured, he is almost always immediately cut. Look no further than Frank Mason III’s short stint with Orlando for proof of that.

Ultimately, that uncertainty is why I think Wilson will return. If a team is out there that is willing to guarantee him a great deal — in a relative sense, as an undrafted player, and the key word there is guarantee — then I think he’d take it in a second. I get the feeling that he’d like to go. I’m just not sure what that deal would look like or that that team is out there.

A return to Kansas would give Wilson more time to showcase what he can do — as well as a greater opportunity to do it — and would open the door to some potentially serious name, image and likeness money as well as the chance to serve as the face of the blue blood program.

Every time a KU player is interviewed for a national college basketball podcast or on SportsCenter or wherever else in the months ahead that make up college basketball’s offseason and preseason, it will be Wilson who gets the first crack at putting himself out there. Not Ochai Agbaji. Not Remy Martin. Not anyone else. That can only enhance Wilson’s stock and NIL earning potential.

Look for more on the NIL angle sometime after his announcement, provided he does in fact decide to come back to Kansas.

From there, it’s all about the work. We already know Wilson is willing to work. As a leader and a returning veteran on a mission, I think we’d see a new side of Wilson. And it’s not like he has that far to go to be big time.

He shot just 26% from 3-point land last season and still averaged 11.1 points per game. He would get more shots next season and if he could raise his 3-point percentage to 34-35% it’s not hard to see him becoming a 15-16 points-per-game guy.

As for McCullar, I’ve believed since he announced he would attend KU if he returned to school a couple of weeks ago that he would wind up a Jayahwk. The fit is just too perfect and the opportunity too great for him to pass it up by hoping to get noticed in the G League.

The exposure he’ll get at Kansas — through winning, from the brand and because of the spotlight you get at a blue blood program that just doesn’t come at every other school — will put McCullar in a new light and give him an opportunity to showcase himself for those who might not have had time to look as closely. If he turns in a strong season, it could open some serious doors for his professional future.

The critics will say that didn’t happen for Remy Martin. But Martin was never going to play in the NBA. He was not invited to the pre-draft combine once during his five-year college career and his size and skills just don’t quite translate. Could he survive out there? Absolutely. But the NBA talent evaluators aren’t looking for guys like Martin. They are looking for guys like McCullar, and his time as a Jayhawk will only help him in his pursuit of a pro career.

June 1 has arrived and today’s the day we’ll start to get a more complete look at exactly what team Kansas will put on the floor to defend its 2022 national title.

Will be checking frequently for news on both guys.

I like the way you think on this, Matt, and hope you are right. Really want to see both in C&B next season!

Matt, I know you said more that there is more to come on the NIL angle if Jalen winds up staying at KU, but curious if you've read or heard any more on the adidas NIL campaign they launched in March. Reading some of the articles, it looks like student athletes at adidas schools will have the ability to become paid spokespersons for the brand. Surely as you pointed out, Jalen would be one of if not the face of the program, and adidas will likely want to use him and others from their flagship teams to the fullest extent possible. For someone that is a projected as a two-way or G league player, fully guaranteed money from NIL deals could match or beat anything he could get as a pro currently if he plays his cards right.

Benny - Heard this factored into Oscar’s decision to return to uk.

Dirk, I think this definitely played a factor into Oscar's decision to return, but I also don't think he has a serious future in the NBA, whereas Jalen's body and game fit the current game much better. Oscar is undersized as a traditional center at 6'9" and isn't mobile enough to defend the pick and roll, and lacks a handle or consistent range out to the arc so he can't really play as the 4 for an NBA team that looks to stretch. He's basically a shorter version of Dok early in his KU career. This isn't to say though that he's not a great college player and won't make some serious money overseas.

Benny - You know a lot more about OT than I do. While I recognize he doesn’t fit the NBA prototype, there are also other successful players that don’t. There are also successful nba players that have grown their game in the pros. It would seem there might be a place for a rebound magnet, and maybe moreso than a sf with a questionable 3.