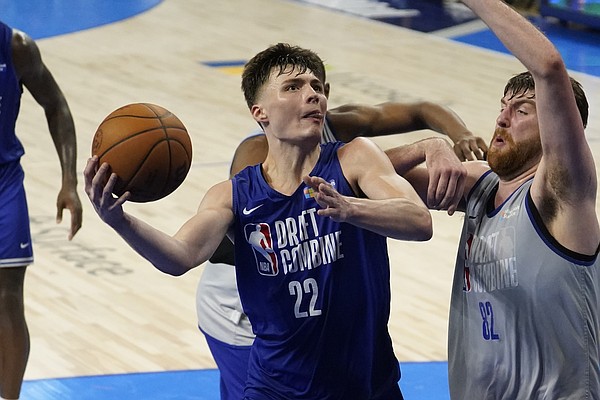 Now that he’s known for about a week that he’s staying in the 2022 NBA draft, former Kansas guard Christian Braun has been able to attack his workouts with an even different mindset.

Although each of the workouts remains an audition of sorts, Braun has been able to move through them with the knowledge that his basketball playing future rests on the results of his performance.

There is no longer a safety net or fallback plan. And that appears to be suiting the ultra-competitive Braun just fine. After a solid showing at the NBA combine in mid-May, Braun has conducted small-group workouts with the Los Angeles Clippers and Indiana Pacers.

After this week’s session with the Pacers, he sat down with a couple of folks in Indianapolis to breakdown his experience.

“The process has been great up to this point,” he told James Boyd of IndyStar.com. “You just kind of have to enjoy every day, every second. It’s a lot of travel, but you’re obviously blessed to have this opportunity.”

Projected by some of the top draft analysts as a likely late-first-round pick, Braun made it clear in Indianapolis that his current focus is on showing that the type of player he was at Kansas can translate to the NBA.

“I think just my athleticism and to show I can knock down shots,” he said when asked by a Pacers’ in-house media rep what he wanted to emphasize during workouts. “I think that’s important for me. They’ve pretty much seen everything else.”

From Day 1 in Lawrence, Braun made a name for himself as a grinder and he believes that mentality can help him standout to teams that might be considering drafting him.

He said he could see himself being a solid “3 and D” guy in the NBA — defined most often as a non-star player who is able to knock down open 3-pointers and willing to sell out on defense — and noted that he believed his intangibles would continue to serve him well in the pro game.

“I think I bring a lot of things that impact winning on a lot of different levels,” Braun said during his sit-down with the Pacers. “I can dive on the ground and get a loose ball, play defense; I think I can bring a little bit of everything my first year in the league.”

While a good chunk of Braun’s attention has been on getting ready for the June 23 draft, his mind has not been too far removed from KU.

Just before 1 p.m. Wednesday, Braun posted to Twitter an update that he, like countless Kansas basketball fans, was eagerly awaiting a stay-or-go decision from Jalen Wilson, who has until 10:59 p.m. (Central) Wednesday night to decide to pull his name out of the draft or stay in it.

“It’s a lot of travel, but you’re obviously blessed to have this opportunity.” pic.twitter.com/1B4ckDEQlX

None by James Boyd

coming off a championship at @KUHoops, Christian Braun (@Ballin25Braun) looks to keep the momentum going through pre-draft workouts as he shows teams his athleticism, shot making ability and personality.#GoldOnTheClock pic.twitter.com/lYIzW2koMa

None by Indiana Pacers