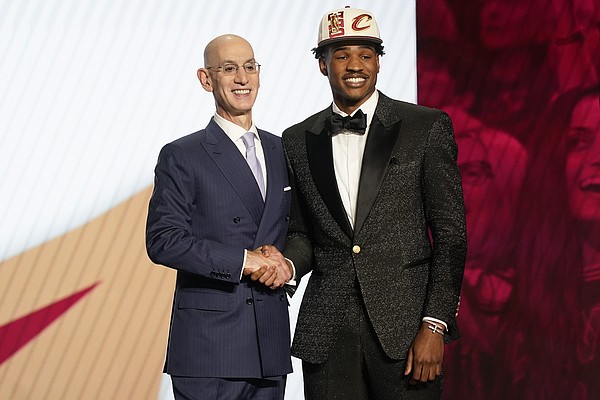 With the NBA’s annual Summer League now under way out west, seven former Kansas Jayhawks are in the process of making their case for a roster spot next season.

For recent first-round draft picks Ochai Agbaji (14th to Cleveland) and Christian Braun (21st to Denver), this month’s Summer League action is more about getting acclimated and learning how things run with their new teams and teammates.

Both 2022 national champions recently signed their rookie contracts, and both are expected to play meaningful roles for the Cavs and Nuggets in Year 1.

Braun’s Nuggets open play in Las Vegas at 8 p.m. Friday against Minnesota. Braun and Agbaji will face each other for the first time at 6 p.m. Sunday in Vegas. That game is slated to be televised on ESPNU. All other games can be found on NBA TV. Cleveland also opens its Summer League slate on Friday, at 4 p.m. against San Antonio.

While Agbaji and Braun are this summer’s headliners as far as KU fans are concerned, the rest of the former Jayhawks in Las Vegas figure to have a little more on the line in their upcoming Summer League games. And many of them are hoping to catch on in the league or cash in on second chances.

• Devon Dotson, Washington Wizards – After two years of mostly G League time with the Chicago Bulls, Dotson is hoping to see if a change of scenery will lead to greater opportunity in the NBA. During his first two professional seasons, the former KU point guard appeared in just 22 games with the Bulls, averaging 6.1 minutes per outing. His G League numbers were significantly better, which suggests that a fresh opportunity could pay off. With the Windy City Bulls, he averaged 18.7 points and 6.5 assists per game, with 3.7 rebounds and 2 steals per game in 35 appearances over two seasons.

• Marcus Garrett, Miami Heat – Before a wrist injury ended his rookie season, Garrett had played his way into a two-way role with the Heat, appearing in 12 games with the NBA club and eight more with Miami’s G League affiliate. The wrist injury signaled the end of his initial contract agreement and Garrett was waived. But the fact that he’s back with the franchise this summer certainly qualifies as good news. We already know they like him. Now they need to see if he can do enough on the court to justify another two-way deal. Garrett showed with the Sioux Falls Skyforce that he can fill up a stat sheet at the pro level the way he did at KU, averaging 12.4 points, 8.3 rebounds, 4.5 assists and 2 steals per game during his time in the G League.

• Quentin Grimes, New York Knicks – Drafted No. 25 overall in the 2021 NBA draft, after a stint with Houston following his lone season at Kansas, Grimes appeared in 46 games, with six starts, for the Knicks as a rookie. He averaged six points per game on 38.1% 3-point shooting in 17.1 minutes per night and did little else. He has the size and feel to play in the league and his future is likely tied to his jump shot.

• David McCormack, Minnesota Timberwolves – One of the heroes of the 2022 national title game, McCormack signed a Summer League free agent deal with the T‘Wolves after going undrafted in last month’s NBA draft. He did not stand out at the G League Elite Combine in May, but that style of play was not suited for his game. McCormack has a chance to shine here if he can show off his size and shooting touch while becoming a tenacious rebounder. The best-case scenario at this point is a two-way deal of some kind — and with some team — but if McCormack emerges from his Summer League run with that in hand, he’ll be ecstatic.

• Charlie Moore, Detroit Pistons – The one-time Jayhawk, who finished his career with the Miami Hurricanes is getting a shot with the Pistons. Moore has never been one to wow people athletically, but he’s a shot maker and a true facilitator and has good feel for how to get others involved. He’ll have to shoot well to have a chance because when his shots aren’t falling the rest of his game looks a little underwhelming.

Thanks for the update Matt. I hope you will do a follow up with the other NC graduates in the future, even if it’s not specifically BB related.