Is a Big 12 vs. Pac-12 battle brewing on the conference realignment stage? 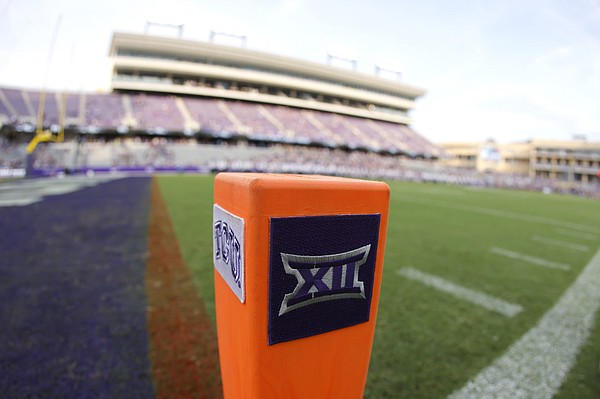 The Big 12 Conference logo is seen on a goal line pylon before Duquesne plays TCU in an NCAA college football game Saturday, Sept. 4, 2021, in Fort Worth, Texas. by AP Photo/Ron Jenkins

There were more significant moves from both the Big 12 and Pac-12 conferences on Tuesday, as the two leagues continued to scramble to find their footing in the latest round of conference realignment.

The stage has been set for an all-out brawl, and it appears as if both sides are ready to rumble.

Tuesday morning, the Pac-12 released a statement that indicated that the conference had authorized its leaders to immediately begin negotiations for its next media rights agreement. The current deal is set to expire in 2024, one year before the Big 12’s current television rights deal expires in 2025.

This came just four days after conference officials authorized league leaders to explore all of its expansion options in the wake of UCLA and USC announcing their move to the Big Ten.

While the negotiations could take weeks and may not actually lead to anything, this is still a significant move. If nothing else, it serves as an announcement that the Pac-12 has joined the race for relevance and provides notice that the Big 12, should it choose to expand, will not simply be handed anything.

The Pac-12 may have fewer needle-moving options and less overall appeal than the Big 12, but the conference is clearly not going down without a fight. Just like the Big 12 refused to do during the previous two rounds of major conference realignment. Somehow, the Big 12 survived both of those.

Doing so a third time may not come without swift and significant action by the Big 12 Conference and new leader Brett Yormark, whose official start date is still nearly a month out on Aug. 1. Don’t think for a second, though, that the new Big 12 boss has not been involved at a very meaningful level in the conversations currently taking place within the conference.

To that end, a little later in the day on Tuesday, CBS Sports’ Dennis Dodd reported that the Big 12 Conference was “involved in deep discussions to add multiple Pac-12 programs as a way to shore up its membership.”

While Arizona, Arizona State, Colorado and Utah have recently been tied to the Big 12 as possible additions, Dodd’s report also named Oregon and Washington as potential expansion candidates for the Big 12.

It remains to be seen whether those two programs, which also have been rumored to be targets of the Big Ten albeit at a lat-er date, would be interested in joining the Big 12. But if you’re the Big 12, and you deem that their value is strong enough to keep your television revenue pie divided equally at a high enough rate to make everyone happy, you absolutely should at least make them say no.

The risk lies with them on this. Even just offering those two additional schools a spot in a strengthened Big 12 paints the conference in a position of power. And that, for now, is the easy and early answer to the Pac-12 making its first move in this race.

The key is action. In past rounds of realignment, the Big 12 has shown a preference for patience. But the landscape is different today than it was then. The stakes are higher, as well.

Survival and key positioning in the power conference hierarchy are on the line this time. There is still room for smart and strategic planning as long as it’s paired with swift action. But sit-ting on your hands this time around could be catastrophic.

I'm in favor of the Big XII and Pac XII merging to make something like a 20 team league, with an eastern and a western division.

As for the Fighting Irish, my hope is they delay and delay so much they wind up without an NBC deal and they have to crawl bowler hat in hand to the Big East to ask they be added for football to go along with their other sports. They should be humbled.

I think if it comes to that for Notre Dame they'll approach the ACC where their other sports are already affiliated.

There's not going to be a merger. The four teams talked about the most -- ASU, Arizona, Utah, Colorado -- are likely halfway out the door.

My guess is that's all that's going to happen on the Big 12 end.

Oregon and Washington simply want to not be left behind. But it's obvious they're eyeing the Big 10 (and who isn't) and not the Big 12. I can't envision Cal or Stanford doing that either.

A merger puts the conference at 22 teams. I can't see how that functions, especially with two completely different leadership cultures in place.

If you went to 18 -- an absurd number in itself -- you could at least have 3 divisions for football. West, Central, East. I have no idea how even that gets managed. It's why 16 with four divisions/pods helps. Much easier to uniformially schedule.

Regardless, I agree with what Matt stated in a previous piece. KU is in a decent spot now, or so you would think. Either somehow the Big 10 goes really big and KU sneaks in as one of the last teams in, or we're in a large and "3rd" conference for football that will bring dollars and eyeballs -- even if it's not at the Big 10 or SECs level.

The PAC12 action really has little to do with the Big12, and everything to do with reacting to the first two schools leaving with virtually no catch. They can also try negotiate all they want right now, but likely won’t get anything substantive from a network. How many and what schools are part of the contract? Even if a contract was prepared “quickly”, it would still need to be signed by each institution to go into effect. A school that was looking at leaving wouldn’t be obligated to sign by a particular date. That could be written into the contract if the conference was operating from a position of power, except that it’s not.

The Big12 has had lots of options of varying degrees of value. The PAC12 shot their wad the last time out, didn’t step up to major player status (regardless of insinuations by some) and now has virtually no leverage whatsoever. It’s a carcass that will be picked over.

Oegon and Washington are too sexy to go to the Big 12. I think the Big 10 knows this and snatches them up.

I'd be happy with the 4 coming to the Big 12. Arizona schools are dumpster fires in football so we won't be the guaranteed bottom.dweller. And by then I expect Leipold will have us somewhat respectable. I'd love to go see a football game in Colorado... I wonder what Colorado thinks about joining the Big 12 again?

I'll believe all this when I see it. Big 12 being aggressive and Alpha doesn't feel right.

Oregon and Washington might think they’re sexy, but that doesn’t mean the B1G does. In fact, it would appear that the B1G doesn’t think so, or they wouldn’t have been left behind.

There’s definitely no reason for the Big12 to merge with the PAC12. They were already lagging behind. Unless the school is worth $50M+, they’re not value added.

Who really cares? We have absolutely no control over it.

At times like these, the "Serenity Prayer" is appropriate.

So, does Notre Dame football cave to the cash and join a conference? I doubt it.

Clemson, Notre Dame are the two cash cows left. Oregon because of Nike is a viable option.

If you were picking four schools it should be Oregon, Colorado, Arizona, and Washington. Cal and Stanford as viable options.

Arizona State, WSU, OSU are not viable, and with BYU already in, Utah shouldn't be considered. One School per state unless if it is FL, CA, or TX. Can we boot K-State?

Blow everything up, have 7 leagues with 10 teams each. This gets all power football teams into a conference where they can play round robin in football and basketball. Let the conference winners and one additional team play in an 8 team football playoff. Basketball works just like the Big XII has for the last handful of years playing home and away against every team.

This is just getting to be a bigger mess and taking away from the quality of teams and matchups we can watch every week.

Bob I couldn't agree more. 4x16=64, that would be the ideal, or 7x10=70, but either way the lack of regional identification is detracting from the overall product appeal. At some point some small conference should bring an anti-trust suit against the SEC and Big 12. Ideally I would like 8 conference with at least 8, big 10 and SEC could be 10. The attraction of the NCAA tournament is the cinderella possibility, the mega conferences are going to make that impossible. The real culprit is ESPN. They are simply destroying college football.

Then you put 6 teams in with each of the programs for a total of 8 teams in each conference.

You play the 7 games in your conference and the top 2 teams from each conference play each other for the winner to go to the 8 team play-off.

That leaves 5 non-conference games that "don't matter" for play-offs. Therefore Alabama wouldn't care about playing OU or USC or another school because it doesn't affect their play-off options. You wouldn't see them play Jacksonville St in week 11 because if they lose it doesn't matter, except for seeding the 8 final teams.

There would be way better games on the slate because they wouldn't care about the FBS2 playing FBS teams.

If you wanted to go up to 10 teams in each conference, playing 9 with 3 non-conference it wouldn't be the end of the world. Yes at the end of the day the top schools would always be in play-offs, but don't we like KU in the tournament every year in basketball (or the blue bloods) ultimately, you are driving the red bloods in football every year (USC, AL, OU, FSU, TAM, OSU, etc.). My point is you preserve conference, you get the re-occurring best teams, and if you win your conference you are in. Not always the best 16 teams, but the most excellent way...you know what you have to do at the beginning of the season to win.

If you wanted only 8 teams instead of 16, you win your conference, the 8 teams seeded play instead of a conference champ game.

It seems like everyone fixates on the numbers - X conferences of X. That's not how these things work - they work by the networks deciding where the most value can be gained, then by "encouraging" conferences and schools to make the changes.

Why 4 power conferences? Why 2? Consolidation is happening because the networks see better value there, but eventually the Alabama's and Ohio State's of the world are going to be tired of splitting $100M with Vanderbilts and Purdues. Eventually. The top big moneymakers will split off and form their own club.

We'll still be OK however that shakes out. Just because the big football schools want their payout and their own league, there's plenty of room for the other 50+ schools that enjoy regional rivalries and playing football. It's not going to disband. I'll watch and root for KU if we're in the superleague or DIII.