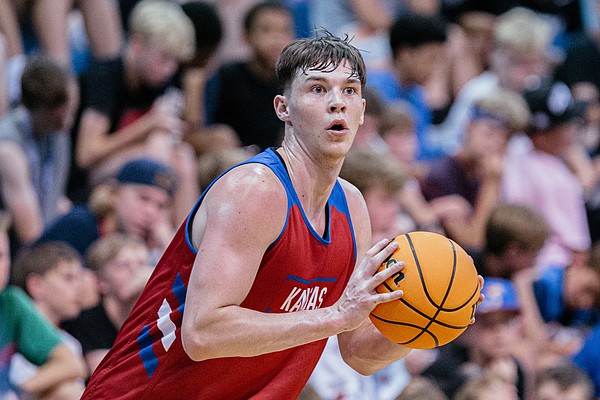 Forward Zach Clemence looks to pass the ball during the team scrimmage at the annual Bill Self Basketball Camp on Wednesday, June 8, 2022 at Allen Fieldhouse. by Emma Pravecek/Journal-World Photo

With summer workouts now in the past and the 2022-23 Kansas basketball roster set, we have a little better idea of how Bill Self’s squad will look when it hits the floor to defend the 2022 national title later this year.

The Jayhawks will feature a returning core of veterans in Jalen Wilson and Dajuan Harris Jr., and Self and company are eager to see what returning role players like Zach Clemence, KJ Adams, Joe Yesufu and Bobby Pettiford can do in their second seasons with the program.

Then there are the newcomers. It’s not 11 new faces like it was a season ago. But it’s a decent amount nonetheless, headlined by Texas Tech transfer Kevin McCullar Jr. as well as five-star freshmen Gradey Dick and MJ Rice.

The 2022-23 Jayhawks have even more depth in the front court in the form of freshmen Ernest Udeh Jr. and Zuby Ejiofor along with super-senior big man Cam Martin, who transferred to KU from Division II Missouri Southern State last season but elected to redshirt.

But it’s still too early to know what any of those three will bring to the lineup, and no one quite knows what to expect from second-year Jayhawk Kyle Cuffe Jr., who also redshirted last season.

What is known, however, is that the Jayhawks themselves believe they have the kind of roster in place that can make a real run at defending the title and getting the Jayhawks back to the Final Four for a second consecutive year.

Now that we’ve seen some of these guys play and recently talked to nearly all of them, let’s dive into exactly what this team looks like entering the rest of the summer.

• Leadership – Harris is a natural leader because of the way he plays the point guard position and he has vowed to be more intentional about his leadership next season, as well. But all signs point to Wilson as the biggest reason this team will be in good shape in the leadership department. Not only is Wilson the team’s top returning player, but he also may be the most competitive and should be the face of the program. He’s hungry to improve his draft stock and show the world that the Jayhawks are still among the top teams in the country, and he’ll push both himself and his teammates to try to prove that to the rest of college basketball. And then, of course, there’s Self, who, despite the still-looming NCAA investigation, just seems to be getting better and having more fun all the time. Both of those elements benefit his teams in a big way.

• Backcourt and wing depth – In Wilson and McCullar, along with Dick and Rice, the Jayhawks have four uber-talented wings with a good mix of experience. All four of those guys can play multiple positions and each brings something slightly different to the roster. Dick is arguably the team’s best shooter and a terrific athlete. Rice is a three-level scorer with physical maturity beyond his years. McCullar is a defensive menace. And Wilson’s intangibles are headlined by his rebounding prowess and ability to push the ball in the open floor and drive to the rim. Add to that the top trio of guards in Harris, Yesufu and Pettiford, who also are interchangeable in the backcourt, and you’re looking at a roster that figures to have all kinds of flexibility in terms of both who plays and how they play.

• Perimeter defense – There’s plenty of hope (and reason to believe) that Pettiford and Yesufu can both be elite, impact defenders on the perimeter. But the Jayhawks already know that Harris and McCullar are. That duo, along with KU’s typical progression of improving its team defense from week to week throughout the season, should give this squad the potential to be pretty solid defensively. After being ranked in the 40s midway through the season in KenPom.com’s defensive efficiency numbers, the 2021-22 Jayhawks climbed all the way up to 17th by season’s end. The 2022-23 squad should start closer to that number. How high the Jayhawks climb will be largely dependent on how they defend down low. But their perimeter defense — especially if they play small — should be a strength on Day 1.

• What happens inside? – It sure looks like sophomore Zach Clemence is going to get the first crack at starting at the 5 for the Jayhawks and the table appears to be set for a breakout season. Clemence, who is highly competitive and supremely gifted as an offensive player, is hungrier than ever and what little experience he gained by going along for the ride last season should help him have a better understanding of what the team needs from him and what it takes to play big minutes as a big man. He’ll be pushed by both Udeh and Ejiofor, who are athletic, explosive and versatile in their own right. Martin remains the wildcard here, and how much he plays likely will be determined by how well he defends. That’s probably the case for all four KU big men. None of them can be classified as true rim protectors, and all of them will have to embrace the physical nature of playing down low to show the coaching staff that they deserve minutes. We could be looking at a committee approach at the 5 in the early going. But if Clemence comes out of the gate on fire, he’s got the best chance of the bunch to grab the starting nod and never give it up.

• 3-point shooting – There are talented shooters on this roster, but they’re also replacing some absolute marksmen. No single absence will be more important to make up for than the ability to replace what Ochai Agbaji could do as an outside shooter. Dick, Wilson, Rice, Clemence and even Harris, along with a few others, all have the ability to knock in shots from the perimeter. But it remains to be seen if any of them can do it quite as well as Agbaji. Or Christian Braun, for that matter. Those two first-round draft picks combined to shoot 40% from 3-point range last season, with Agbaji knocking in 103 3-pointers and Braun draining 51. Nobody else on the roster made more than 30. Even Jalen Coleman-Lands (44.8%) and Remy Martin (38.2%) proved to be dangerous 3-point shooters capable of making some critical shots. It’s next man up in that department for these Jayhawks, and how well they deliver figures to play a huge role in how good this team can be.

• How will the young guys handle being hunted? – There’s a reason that Dick, Ejiofor, Rice and Udeh made up the No. 3-ranked recruiting class in the nation according to Rivals.com. They’re all incredibly talented. But given the fact that all four of them could be playing key roles on next season’s team — and three of them certainly will be — it remains a worthy question to wonder just how well — and how quickly — they’ll adjust to the college game and the task of defending a national title. All four are competitive, confident players who have been through plenty of big moments. But playing in front of 16,300 fans at home night in and night out and drawing vicious roars from opposing fans on the road is a whole other animal than these guys are used to. All of them seem ready for it. Those challenges are actually part of the reason each came to KU in the first place. But we won’t know for sure how they perform in those situations until they’ve actually experienced it and the rest of us have seen it.

• Wilson is the other easy and obvious choice at his position in the starting five, but I do think KJ Adams will play a ton, perhaps at 3 different positions

• It's Clemence's spot to lose, but Udeh's going to surprise a lot of people

Because Udeh is the only real post player, it would seem that “what happens inside” and “3 pt shooting” could be solved by inverting the O. Clemence and Martin are both very capable from 3. There were times last year when we posted up the perimeter players, and it wouldn’t be difficult to see the coaches implementing the same scenario more often.

Harris, Pettiford, and Yesufu are all 6’ish guards, but I’d hardly call them interchangeable. They have very different skill sets. They seem to be a bit of a continuum from assist oriented to scoring oriented and somewhere in between. It is exciting to look forward to their development.

So much potential. So many unknowns. So exciting.

Is it that far fetched to think we will see the line up of Harris, Wilson, Dick, Rice and McCullar? Maybe not starting but isn't that just a match up nightmare for most teams? I don't see them starting the season that way because HCBS loves an inside presence but he has shown in the last 5+ years that willingness to flex and change.

It sure seems postionless basketball is the here to stay.

That lineup would be nasty and could be a lot of fun. True big men are tougher to come by these days and, as long as there's no significant size advantage, guys like Jalen and McCullar can definitely hold their own down low.

You're right. Won't be a starting five. But it wouldn't surprise me at all if that group plays together on occasion.

The center position is the biggest weakness of this team. The Hawks are going to give up a lot of points inside.

All of you are talking about if's and could be's. The chemistry is great, everyone likes each other, no need to worry. Right???

I am now a member of the IARP. In reviewing the case that is pending I can share some information -

Congrats to DM signing to play in Turkey. (Dave please double check, and take a photo of your bags to ensure you are good to go. Turkey is a country you need to be extra careful in)!

Rodney - Congratulations! One of your most creative posts. Maybe it’s the AARP membership 😉

Todd - I don’t think that’s far fetched at all, though options could include KJ, Zuby, and others in place of Gradey/MJ. In fact, I can basically assure you that Coach will roll out those groups prior to January. Everything changes when conference play starts.

It will come down to who can defend. The D development of Dok was what took the ’20 team to the top. It would be great to have a single big that could defend the post and perimeter, though last year showed that having multiple players ready to insert worked as well. I’m guessing it is more of the latter this year. Some will accentuate the various deficiencies of individual players, and they definitely exist. It seems though that having a multitude of options will again be a strength and Coach seems to be becoming more comfortable in operating in that flexibility.

It’s also always nice to have a NC as to hang your hat on to make a point. Hopefully the returning players will remember the “attention to the little things, play my role, do whatever it takes to win” mentality of last year’s leaders.

What about Cam Martin in the post? He's the most experienced, by far.