During Big 12 introduction, new commissioner Brett Yormark illustrates why he was the right hire at the right time 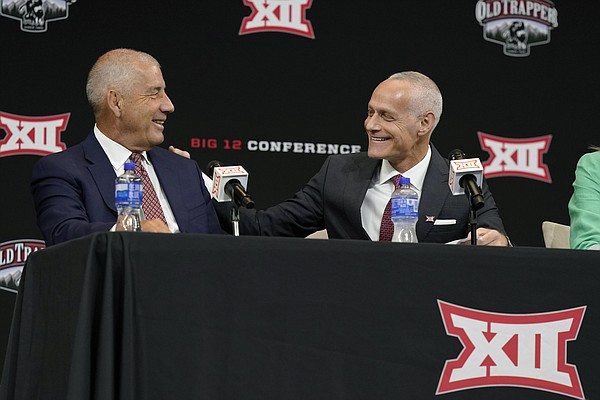 It remains to be seen what happens with the conference’s roster and whether more universities join or even leave the Big 12 in the years to come.

But regardless of what the lineup looks like now or in the future, the conference seems to be in terrific shape for a move into the new era of college athletics with new commissioner Brett Yormark in charge.

Yormark met with Big 12 media members for the first time on Wednesday and he painted a clear picture of who he is, what he believes in and where he sees the Big 12 going.

His unofficial tag line of building the Big 12’s “brand and business” was a terrific indicator of exactly where his head is at as he jumps into this new endeavor.

With expansion a possibility and survival a must, building a stronger and better-than-ever Big 12 will be critical for all of the conference’s members, current and future. But it won’t happen without a businesslike approach, and Yormark is well prepared for both layers of leading this conference.

Look no further than his work with the Brooklyn Nets for proof of that.

Yormark, who comes to Big 12 country after a successful stint as an executive on the commercial side of Jay-Z’s Roc Nation entertainment agency, mentioned the Nets during his introduction on Wednesday.

While the Big 12 is not in the same dire straits that the franchise formerly stuck in mediocrity in New Jersey once was, the evolution of the Nets, from uninspiring, overlooked NBA franchise to global brand at the heart of a revitalization in Brooklyn, New York, is the same kind of path that Yormark believes is possible for the Big 12.

Yormark joined the Nets in 2005 and led the move to Brooklyn in 2012. Like that rebranding effort, which was energized by Jay-Z and the construction of Barclays Center, Yormark believes the Big 12 can become more of a national brand while also getting “a little younger, hipper, cooler.”

Dan Beebe thought he was doing that more than a decade ago. But nobody was buying it.

Bob Bowlsby’s time on the job brought stability, respectability and professionalism back to the Big 12, even if it was of the quiet and cautious type.

Now it’s time for the next step and a modern-day approach.

Yormark said he admired everything Bowlsby did for the conference and added that he felt he was being handed the baton at a perfect time. But don’t be surprised for a second if the new Big 12 looks more like something run by Jay-Z than Jay Leno.

“We will be bold and humble, aggressive and thoughtful and innovative and creative, all in an effort to position the conference in a way that not only grows the Big 12 brand and business but makes us a bit more contemporary,” Yormark said Wednesday.

All of that is ideal for a conference that is at a significant crossroads, both internally and within the larger landscape of college athletics.

The hiring of Yormark in and of itself came from some outside-the-box thinking and was deserving of praise immediately. But now that we’ve had a chance to hear from him, it’s even more clear that hiring Yormark was the exact right thing at the exact right time.

For starters, he has significant experience in the space that the conference — and all of college athletics — soon will be operating in on a more full-time basis.

Like it or not, entertainment value, technological advances and, yes, money, will all soon be every bit as important as final scores, recruiting wins and coaching contracts. And we’re probably there already.

It’s not just Yormark’s resume that makes him the perfect fit, though.

There’s also his demeanor, approach and competitiveness. He seems like a man who is up for any and all challenges and, more importantly, one who will put the best interest of the Big 12 above everything else, regardless of how it looks or what others are saying. The ability to do that without issue comes from his confidence and track record.

He already has extensive plans to visit Big 12 campuses and study data points to plan the conference’s next moves. But he also made it clear that the conference, and therefore he, were “open for business” in the meantime — in all areas.

What exactly that means and how that winds up benefiting the Big 12 remains to be seen. But those are exactly the types of people and personalities you need and want in the room when you’re negotiating mega-million-dollar broadcasting deals, which the Big 12 will be doing in the next two or three years.

Yormark will enter into those negotiations with a clear goal and a plan to attack rather than settle and with fresh ideas and a willingness to take risks.

That’s something the Big 12 hasn’t seen much of during the past couple of decades, and it’s something the conference is going to need as it moves forward toward what it hopes will be a bright and lucrative future.

One of the phrases that stuck out to me was he referred to a multimedia deal and not a broadcasting deal.

No doubt it's different. It's a lot about streaming and the combination of getting Tier 1 money from FOX/ESPN and getting Tier 2 money from the Apple TVs, Paramount+, etc. outlets.

I've read that the streaming Tier 2 money paid to the Big 12 could alone be worth $20-30 million per year to each member. Add to that whatever actual TV contract they have in place and you're looking at $60-70 million annually per school for the third best conference.

Bob Bowlsby is "Living in the Past".

Brett Yormark is "Living for the Future".

Now, if you "Run the Calculus", we will see.

I am tentatively excited for all of this.

As a side note, if ESPN were intelligent (stop sentence there?) they would be figuring out a way to move their football inventory from the ACC to the SEC to protect it, while using the Big 12 as the center point of taking the best of the rest of the ACC and Pac 12 and smashing it into one conference. They either have to overpay for a LOT of ACC schools that are not worth close to what it would take to keep Clemson and Florida State around, or they have to break it up. Instead, a solid core of 20-24 schools spanning the entire nation could be formed that is way better positioned than either east or west regional ACC and Pac 12.

They'll do it wrong, I am sure.

Matt - Thanks for the clarification. Very encouraging. Looking forward to more in the future

Spencer - ESPN already has all the ACC schools committed for more than a decade. I think it was significant when it was signed, but it’s already becoming quite pedestrian; fourth class?

Multimedia ultimately means more costs to the consumer. Sometimes in the not-so-distant future, college athletic departments might finally price out their fans, especially when their teams are not particularly good, i.e., KU football for the past decade. $60 to $70 million/team annually sounds great if consumers are willing to pay. The KC Royals have demonstrated how to loss an entire generation of fan base who do not have a cable service (option is to purchase Bally Sports Plus at only $19.99 per month or $189.99 per year). If I did not already overpay for a cable service (Spectrum), I would not have watched a minute of their games this season. As KU continues to move more of their games to multiple streaming services, e.g., ESPN+, etc., etc., they just might start pricing out a portion of their already fringe fanbase. Witness how many KU students attend football games even when their tickets are cheap. How many students would be willing pay extra to stream away games for a bad football program? How many KU alumni? This level of interest, or lack thereof, is factored in when negotiating contracts with multimedia outlets and is one of many reasons why KU is not being heavily recruited to join a Power 2 football program. As long as Brian Hanni’s and David Lawrence’s broadcasts of KU football games are free, I guess true fans in the region can follow away games. However, I am sure someone in the athletic department is trying to figure out how to control the radio airways. Interest in college athletics (whatever that is) is dropping and driving fringe consumers away is a receipt for disaster.

Dirk, it was barely third place when it was signed, with the Big 12 set to bargain after the ACC. It was a bad contract that should have never been agreed to but they were desperate to avoid schools being free agents. In fourteen more years it will go from a poor 4th to just atrocious. What that does, however, is create risk of ESPN losing their main commodities in that conference. Imagine you are Florida State, and your buyout is 400-500 million without even fighting it, but your contract makes 35 million a season and the SEC or Big10 is 100 million plus. What I don't know is the langue of the contract buyout; prorated on time left, is it flat fee?

The business side of this always intrigues me, because ESPN has actually put themselves in a very risky scenario by their continual favoring of the ACC and Pac 12. They now find themselves locked into a contract that, while economically viable (it is cheap), puts them at risk of losing the very products they covet within that contract. Clemson and Florida State are not going to sit around and make half what their neighbors do and ESPN knows this. To safeguard push them to the SEC would require breaking up the ACC, in which case they know they might lose one or two products to a rival network. ESPN made the massive, and common, mistake of mistaking population centers for viewership, and forgot to gauge fan interest level. As though having Syracuse in a conference meant they "owned New York interest." Come on... what were they thinking? Saturdays in New York are all about Orangemen football, I guess?

So try and force an ACC and Pac 12 TV deal? That opens the door for those schools to leave. Leave it as is? That forces the Big Foosball schools to look elsewhere. Overpay the league? Why when you could manipulate it to finally trim some fat. To me ESPN should be embracing this opportunity but I am not sure they are that "with it."

There is a way to merge the Pac and ACC into the B1G, SEC and Big 12 and create a better conference overall with distributed time zones and viewership. I want to type it out but it would be too damn long to read. Suffice to say, the Big 12 would/should gain the best 4-6 of the Pac and 2 from the non SEC/B1G selected ACC remnants. The others go to the Big East, AAC or Mountain West. But we'll see how it all plays out. I am sure it will be a cluster. Should be fun to watch.