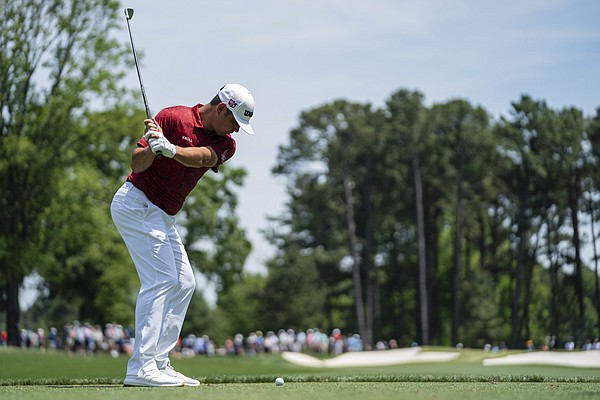 Gary Woodland tees off on the fourth hole during the fourth round of the Wells Fargo Championship golf tournament at Quail Hollow on Sunday, May 9, 2021, in Charlotte, N.C. by AP Photo/Jacob Kupferman

After shooting a 6-under 64 in the opening round at the Scottish Open on Thursday, former Kansas golf standout Gary Woodland shot 7-over during the next three rounds — including a 3-over-par 73 on Sunday — to finish in a tie for 30th.

Woodland shot an even-par 35, with nine pars, on the front nine on Sunday before carding bogeys on four of his final nine holes with one birdie.

Woodland entered the third round in a tie for second place but fell down the leaderboard in each of the next two rounds. He still managed to earn $49,000 for the week and move up two spots in the FedEx Cup standings.

Xander Schauffele won the event at 7-under after shooting 9-under in Rounds 2 and 3 and an even-par 70 on Sunday.

The event was the final tune-up before next week’s Open Championship that will take place at the Old Course down the road in St. Andrews, Scotland.

The Open Championship is the PGA Tour’s fourth and final major tournament of the 2022 season.

The Open is slated for Thursday through Sunday. Woodland’s best finish at the British Open came in 2016, when he finished tied for 12th.

Woodland has made the cut in 10 of the 20 tournaments he has played in during the 2022 season. That includes five top-10 finishes and seven times placing in the top 25. He has earned just over $1.9 million this season.