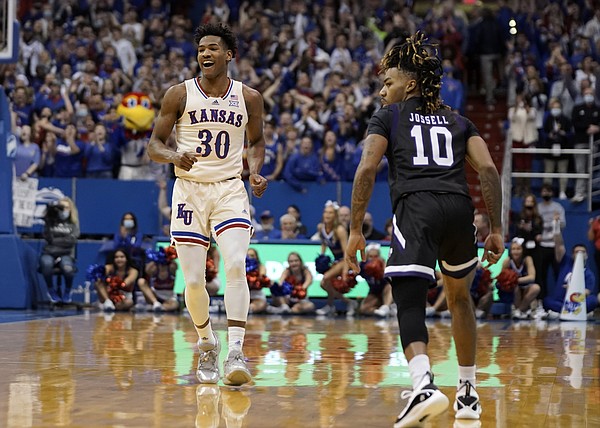 Kansas guard Ochai Agbaji (30) smiles after a three pointer over Stephen F. Austin guard Latrell Jossell (10) during the first half on Saturday, Dec. 18, 2021 at Allen Fieldhouse. by Nick Krug

Kansas guard Ochai Agbaji on Thursday night was back at his old high school as one of the guests of honor for a special ceremony featuring his old uniform.

With the blast from his past encased in glass, with his No. 30 in light blue on the white jersey, Agbaji shared the moment with fans on hands and then shared his thoughts with a couple of local television stations.

Agbaji’s Oak Park story is as unique as it is special. He left the school’s halls as its all-time leading scorer but did not become a target for Kansas or many other Division I basketball programs until his senior season.

Unranked by all of the national recruiting sites, Agbaji jumped into the rankings in the big way after committing to Kansas, climbing into the Rivals.com picture at No. 141.

His story from there is now well-known by Kansas fans. He planned to redshirt as a freshman, but came into the picture midway through the 2018-19 season to help a roster impacted by injuries. Immediately, he showed off his athleticism, charisma, drive and personality.

He has started 90 games in a row since then — good for eight all-time on KU’s consecutive starts list — and, on Thursday, was named to the Wooden Award Midseason Watch List, featuring the top 25 players in college basketball this season.

With his size, strength and athleticism, Agbaji does just that. But talk to anyone who knows him and they’ll tell you that, through it all, he has remained the same friendly, outgoing, people-person type of player he was when he was wearing Oak Park colors all those years ago.

Ochai Agbaji back in his old stomping grounds of Oak Park tonight to get his number retired.

He says his hometown is his main motivation. #kubball #RockChalk pic.twitter.com/Y3GgJieC2A

None by PJ Green