More on Ochai Agbaji's big shot vs. Texas Tech: So pure. So clutch. So familiar? 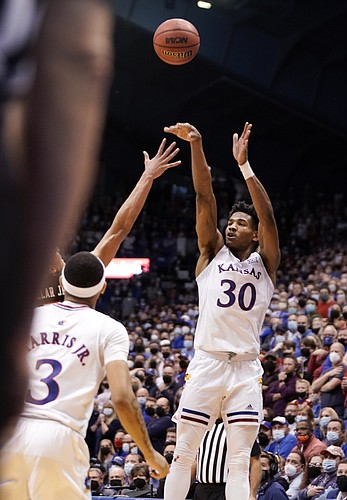 When it comes to big basketball shots at the University of Kansas, Mario Chalmers’ game-tying 3-pointer that sent the 2008 national championship game to overtime is obviously the gold standard.

But it’s far from the only big shot that was ever hit. Some won games. Others tied them. And others, like Devonte’ Graham’s driving layup at Texas Tech a few years back or even Clint Normore’s unexpected jumper in the 1988 national championship game that helped KU hang on, were massive in the moment even if they didn’t come at the buzzer.

Still, it’s those last-second, buzzer-beater types that tend to be remembered most — non-vicious dunks category, of course — and Ochai Agbaji’s monster shot against Texas Tech on Monday night will likely be on that list for a long time to come.

I can’t get over the shot. How big it was. How pure it was. How cool, calm and collected Agbaji was when he rose to shoot it and when he got back on defense after it went down.

Watch the shot again (if you haven’t already) and take note of the way it falls through. It was so dead-on and pure that it almost didn’t even move the net. It looked a lot like Graham’s NBA jumpers have started to look, and that’s a great sign for Agbaji, who, on Wednesday, was added into the lottery of Jonathan Givony’s latest mock draft at ESPN.com.

That’s the kind of season that Agbaji is having and it’s a beautiful example for all of those future dreamers of what you can do if you take advantage of every opportunity given to you and believe in yourself at the highest level.

Agbaji could’ve turned pro last season and darn near did. He likely would’ve wound up on some NBA roster — two-way contract or otherwise — and would be grinding his way through his first pro season right now. Instead, he’s marketing himself as a household name in college basketball and showcasing the entire scope of his skill set for GMs and NBA executives to witness.

OK. Back to the shot.

Agbaji, who is now shooting 47% from 3-point range (62-for-132) on the season, has reached the point where, if he’s open and can elevate and square his body, it looks like it’s going in every time it leaves his hand.

None of that came by chance. The Kansas City, Missouri, native has put in all kinds of work on his jump shot during his time at KU, retooling it, working with shooting coaches and mechanisms and reworking his mechanics to release it quicker, shoot it higher and improve his accuracy.

All of that, and more, has led to this season and it does not look as if Agbaji has any plans of slowing down.

If you get to a game this season, go early and watch Agbaji’s pregame routine. It’s very deliberate and methodical and gives you a great glimpse into why he’s able to stay ready for a big shot like that at any moment in a game.

That one, of course, will live in Kansas lore for a long time. Texas Tech fans probably won’t soon forget it either.

So with that in mind, let’s take a quick look at a handful of other recent shots that are on the same level as Agbaji’s the other night versus Texas Tech.

I’m sure I’m forgetting a few. And we’re talking recent history here, so don’t crush me for leaving off shots from the 80s and 90s. You’re more than welcome to add memories of those, and others — old or new — in the comments below.

Here, in no particular order, are the most recent ones that come to mind.

• Christian Braun’s 3-pointer to beat OU – There was still some time on the clock and Braun actually had to hit a pair of free throws to preserve the win. But this shot, from a similar spot on the floor as Agbaji’s, was big time. The guy who made the pass? None other than Agbaji, of course.

• Svi Mykhailiuk vs. Duke in the Elite Eight in Omaha – This is one of my personal favorites simply because of the assassin’s look that Svi flashed after it went in. If you remember, he wasn’t shooting the ball great that night. But this was a no-doubter and it tied the game and led to the Jayhawks winning in overtime to qualify for the 2018 Final Four. Massive shot by one of the all-time great shooters to come through KU.

• Lagerald Vick saves KU vs. Stanford – Remember when Vick was like the best player in college basketball for six weeks after he elected to return for his senior season? This shot was a big part of that. This one, like Agbaji’s, came with about 7 seconds to play and led to OT, where Kansas won 90-84. It also came from a similar spot on the floor as Agbaji and was the product of a little handoff from then-point guard Devon Dotson in much the same way that Dajuan Harris Jr. flipped it to Agbaji on Monday night.

• Devonte' Graham vs. WVU late in OT – You’ll remember this as the game when KU stormed from 14 back late in regulation to force overtime, and Graham — along with many of his teammates — had plenty of big moments in that comeback. But the shot that always stood out to me was the one from in front of the KU bench (again, nearly the same spot as Agbaji’s), when he did a little dance-while-you-dribble move and then rose up and buried a jumper. That shot put KU up eight with 2:13 to play in OT, but it was sort of the dagger and the perfect embodiment of exactly how things went for KU down the stretch in that game.

• Ben McLemore to tie Iowa State – He banked it in from the wing, a little closer to the top of the key, but it was still a heck of a shot and fell through with 1 second showing on the clock. KU went on to win in overtime and McLemore finished with a career-high 33 points.

• Frank Mason III to beat Duke in Champions Classic – You can’t have a list of great shots in recent KU history without this one. Game tied. Time winding down. Mason with the ball. He drove left, jabbed at the elbow to pull-up and buried the open jumper to put Kansas up 77-75 with 1.8 seconds to play. That’s how the game ended and Mason went on to become national player of the year. Hmmm…

Here’s a couple of quick looks at Agbaji’s shot from the other night, just in case you haven’t grown tired of seeing it.

ICE IN HIS VEINS 🥶 pic.twitter.com/mnMBepmjb3

Sherron’s 3 from the corner after a steal of the inbounds pads at the 2-minute mark of the second half was memorable for me because of the combination with the steal and significant place in the comeback.

Always appreciate Clint getting some ’88 love. I’m guessing you’re talking about the shot from the top of the key with the shot clock at about 3 seconds. He was so cold blooded nonchalant in response. It’s right up there with his block/pass breakup of Grant on the crossing pattern near the basket for all time favorite plays.

Jacque Vaughn's end of game clutch 3 for the win against the Bob Knight led Indiana Hoosiers during a mid-day Saturday game in the mid-90's. One of the top 3 loudest moments I've experienced in AFH.

The loudest moment I ever heard at Allen was when Calvin Thompson hit a shot from about 25 feet at the buzzer to tie OU (under Billy Tubbs) in the early '80s.

Unfortunately, OU went on to win in OT, but that was an incredible moment.