Jayhawks' emphasis on avoiding charges in recent weeks could be key vs. Texas Tech 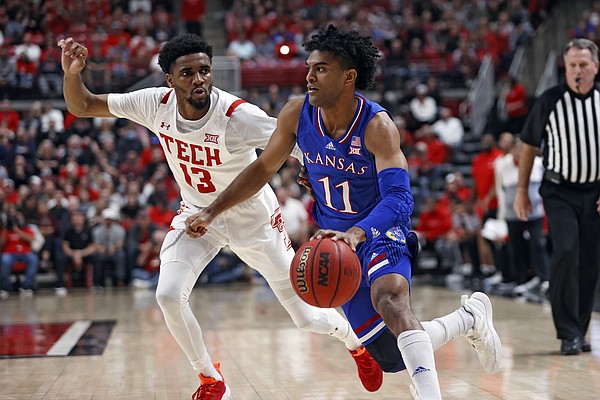 Kansas' Remy Martin (11) dribbles the ball around Texas Tech's Mylik Wilson (13) during the second half of an NCAA college basketball game on Saturday, Jan. 8, 2022, in Lubbock, Texas. (AP Photo/Brad Tollefson)

Kansas basketball coach Bill Self said Saturday that one of the biggest keys for Monday night’s game against Texas Tech was for the Jayhawks to find a way to get to the paint on offense.

However, that objective comes with one caveat — Don’t charge when you get there.

“I think that’s what they emphasize,” Self said of Texas Tech and head coach Mark Adams. “Mark does a good job. If you don’t play off two feet against them, you can charge four times in a half.”

The Jayhawks had plenty of charges called against them in a 75-67 loss in Lubbock, Texas, back on Jan. 8, and in addition to taking points off the board, the calls squashed any chance KU had at developing rhythm on offense and also added to Texas Tech’s momentum.

Leaving their feet without a plan was a problem for several Jayhawks in that game — and throughout the early portion of the season — but the stats show and Self has said that his team has improved significantly in that department of late.

Take Saturday’s tough win at K-State for example. KU was not called for a single charge in that game, and, in an area where it would’ve been real easy to commit one, KU senior Ochai Agbaji contorted his body and used his athleticism to avoid a charge on what proved to be the game-winning shot in the final 10 seconds.

We’ve really made it a point of emphasis to play off of two feet on our drives,” Self said. “Even though we’re not great at it, we’ve certainly been a heck of a lot better.”

Playing off of two feet typically allows players to gather and go up with more control. When you attack off of one foot, it’s usually from a running start and that can lead to players being more sped up and out of control. It also makes it easier for defenders to slide over to establish position in time to take the charge. When you go off of two feet, they don’t always have quite as good of a read on where you’re headed or how you plan to get there.

It’s no secret that defense is where the Red Raiders hang their hat. It’s been that way for years, and even though Adams is in his first year as the team’s head coach, he has been given credit as the architect of Tech’s stifling defense for the past several seasons.

“He wants to load up and swarm to the ball,” said Self, noting that Tech’s team defense and relentless effort is what makes the Red Raiders so tough to attack on offense. “The way teams guard in this league, there’s not going to be any pretty wins.”

No. 5 Kansas and No. 13 Texas Tech are slated for an 8 p.m. tipoff tonight from Allen Fieldhouse on ESPN.

Coaches: If you want to know how committed ⁦@TexasTechMBB⁩ is to team defense, watch this. It’s all in fun but you get the idea. No fun & games tonight as ⁦@KUHoops⁩ seeks revenge for their loss 16 days ago. Another neighborhood brawl in the ⁦@Big12Conference⁩., pic.twitter.com/vcqanzUy66

I definitely noticed Ochai avoid the charge on his winning bucket.

But I'm having a hard time imagining exactly what you mean by "playing off of two feet". If you are driving to the hole, one foot is necessarily being placed one in front of the other, are they not?

I would just say "don't run over people" - it's not that hard. I'm always amazed when I see driving guards in the lane do that without even trying to avoid the defender. I guess they are hoping for a blocking foul -but it seems to be a 50-50 call by the refs.

(I think Mitch got away with one in Saturday's game)

Playing off of two feet — Self's words more than mine — basically means playing under control. Jump stop when attacking the rim before going up. Keeping your feet under you when moving the ball. Not jumping to pass. Things like that. It's all just code for composure.

That’s the sort of insight that was so interesting when we got to watch replays with Coach during the pandemic. It’s just the tip of the iceberg and part of why it’s hilarious to listen to fans “coach”. Right up there with predicting the team won’t improve during the season. In some regards it’s a simple game and yet these nuances are part of what makes Coach a HOFer.

It is encouraging in the video to see Remy and JCL get into the lane. Maybe not coincidental that it’s 2 new guys still learning from the master. Getting into the lane breaks down D’s and generally leads to good O.