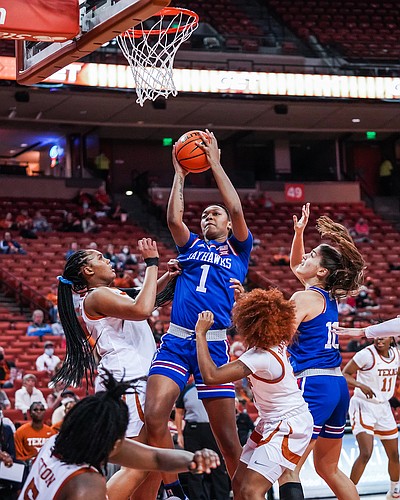 KU forward Taiyanna Jackson handles the ball high above her head in traffic during the Jayhawks game against Texas on Wednesday, Jan. 12, 2022 in Austin, Texas. by Photo courtesy of Damon Young/Kansas Athletics

There’s no way to know for sure whether the Kansas women’s basketball team would have been ranked today, for the first time since 2003, if it had won on Sunday.

But back-to-back wins over Top 15 teams in a conference like the Big 12 certainly would’ve given Brandon Schneider’s team a case.

Instead, the Jayhawks find themselves in the “Others receiving votes” category, right there with their next opponent, Sunflower State rival Kansas State.

Would a win over Baylor have enticed enough poll voters to put KU in their Top 25 to make up the difference between the four votes the Jayhawks got and the 53 votes they would’ve needed to pass Iowa?

It’s hard to know exactly what that win over Baylor would have been worth in terms of the rankings. We know what it would have meant for the program and the buzz they’re trying to create.

Beating a national power like Baylor gets teams noticed. And KU had the Bears on the ropes.

Who cares if Kim Mulkey is no longer the head coach or if Brittney Griner graduated years ago. This is still Baylor. People would’ve paid attention to a KU win. Instead, the game went down as a loss, and KU was sent back to the locker room, tasked with regrouping instead of rejoicing.

The love this team is currently receiving is not limited to votes in the AP poll. The latest Bracketology feature at ESPN.com, which was most recently updated last Friday, included Kansas as a No. 9 seed.

There's a long way to go before Schneider's team can start to worry about their tournament fate or seed positioning. Luckily for the Jayhawks, it likely won’t take much to get their minds back where they need to be.

Schneider said last week that one of his favorite things about this team was that it was committed to the strategy of focusing on the next opponent and nothing else.

And now they’ve reached the next step of turning being competitive into grabbing big wins.

If you’re reading this, you know KU knocked off No. 13 Texas on the road last week. You also probably know that the rest of the schedule is full of tough tasks and great opportunities.

What the Jayhawks do with them remains to be seen.

Today, though, they’re closer to being relevant in the women’s college basketball world than they have been in a long, long time — 3,290 days to be exact. That was the last time the KU women were ranked, when they last appeared in the AP Top 25 on Jan. 14, 2013.

Matt, it's nice to see the great coverage. The program has earned it.

Hopefully there will be a silver lining to that loss to Baylor in the form of a "time to kick the door in instead of just knock on it" mentality. Congrats on the votes received recognition.

A couple more Ws would go a long way towards ending the 9 year drought.