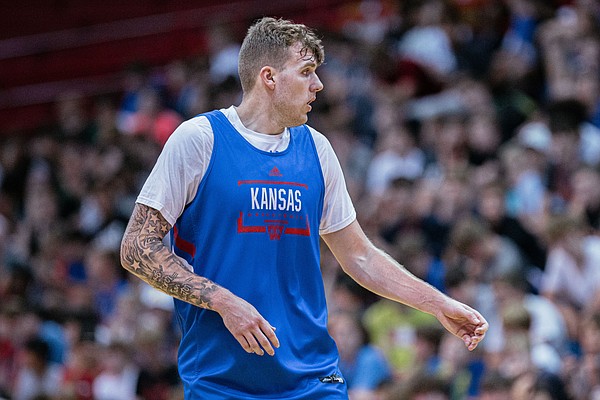 Forward Cam Martin waits for a pass during the team scrimmage at the annual Bill Self Basketball Camp on Wednesday, June 8, 2022 at Allen Fieldhouse. by Emma Pravecek/Journal-World Photo

When Kansas basketball coach Bill Self revealed this week that super-senior forward Cam Martin would be available for Saturday’s game at Missouri, KU fans began to wonder how much Martin might help.

Spoiler alert: It’s been nearly two years since Martin last played a competitive college basketball game and Martin has yet to play a game with his current teammates.

Let’s take a look at how things might play out.

Perhaps the most telling part of the equation is that Self said Thursday that the goal for any player coming back from a prolonged absence should be to have him take the first steps toward shaking off the rust and regaining his rhythm, not hope that he can help the team tremendously in his first game back.

Martin will need time to do both of those things.

The bigger question, though, is how much of an opportunity he’ll have to log any real playing time.

Kansas hasn’t exactly been using its big men at a high rate so far this season. Outside of KJ Adams, anyway.

Part of that has been the play of guys like Ernest Udeh Jr., Zuby Ejiofor and Zach Clemence, who have struggled to produce consistently and been on the bench more than on the floor. In fact, that trio has logged just 9.5% of KU’s minutes played through the first nine games of the season.

Adams, who has started every game at the 5 despite standing just 6-foot-7, has played a little over 12% of the team’s minutes by himself thus far.

On one hand, the low usage rate for Udeh, Ejiofor and Clemence leads one to believe there just aren’t many minutes to spare for a player like Martin.

On the other hand, one might conclude that because those guys have not been given big minutes the opportunity is there for someone like Martin to play well and prove he deserves more than what that group has gotten so far.

I’m just not sure at Missouri in your first game in nearly two years is the place to expect that or the place for KU’s coaching staff to effectively judge how much Martin can help.

It’s not like things get much easier after that. KU plays host to No. 17 Indiana in its next game — Saturday, Dec. 17 at Allen Fieldhouse — and then the Jayhawks have just one non-conference game remaining (Dec. 22 vs. Harvard) before jumping into Big 12 play on Dec. 31.

When Martin first suffered the injury, it was believed that he would not even be back until Big 12 play. So the fact that he’s a couple of weeks ahead of schedule could be helpful. Even if he doesn’t play a lot or play well in KU’s next three games he will at least get the chance to get his feet back under him in limited minutes before being expected to play any kind of a significant role.

Before the season began, it looked as if Martin might be the odd man out in the big man rotation. But none of the guys in front of him — outside of Adams — have done enough to push him too far down the depth chart, so the opportunity to crack KU’s rotation might still be there.

Here’s how he’ll have to do it: Defend, rebound, play physical and make shots. If he does all of those things, a real role could be waiting for him.

As for what to expect on Saturday vs. Mizzou, I wouldn’t set it at anything more than what Clemence has done so far. His season-high for minutes played is 12 — in KU’s overtime win over Wisconsin — and he’s averaging 7 minutes per game in his six appearances.

Both of those numbers seem a little high for Martin right out of the gate, but if he makes a couple of shots — which Clemence, at 0-for-11 for the season has yet to do — and is a reliable defender, he could play in the 6- 10-minute range.

That would be a nice start. But how big of a role Martin can actually have likely would still depend on the production of his teammates as much as anything he does.

Mizzoo might be a great team to return against. They’ve given up 90 to directional schools, so aside from steals, it sounds like their D isn’t much different than what he faced as a D2 AA. A couple 3’s and D would be nice.

Yes, I really hope Cam (as good as a shooter he is) will be cleared by coach to make those shots. But I have a feeling Cam will be positioned just like Lightfoot on offense. Post inside; if guarded, kick the ball out. Cam is so good in pick & roll, watching his HS games/highlights. We haven't seen those plays executed (successfully) by the team. Let's hope Cam will make rotation among the bigs tougher!