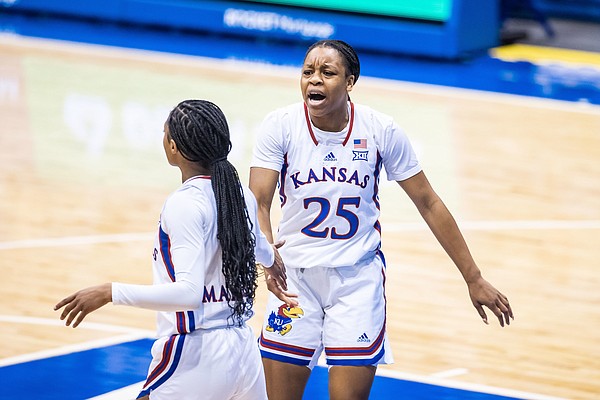 The 2022 calendar year has been a good one for supporters of the University of Kansas’ athletic teams, and Jayhawk fans have proven that they’re capable of big things.

It’s time for those big things to start including the crowds at Allen Fieldhouse for Kansas women’s basketball games.

In case you missed it, the soon-to-be-ranked Jayhawks absolutely crushed No. 12 Arizona on the Wildcats' home floor Thursday night, winning 77-50 and dominating the paint thanks to another stellar showing by Taiyanna “Twin” Jackson — 19 points, 15 rebounds, 3 blocks and 2 steals.

Jackson’s been amazing so far this season, scoring in double figures in all eight of KU’s wins and reaching double-digit rebounds in five of them. In the three games she didn’t get 10 or more boards, she averaged just 21 minutes per game.

Had Jackson played her season average of 28 minutes in those three games, she almost certainly would have reached double digits and, therefore, would have recorded a double-double in every game this season. As it stands, she’s averaging a double-double anyway, at 16.5 points and 10.3 rebounds per game.

Jackson is just one of the many talented players on this KU roster, which is easily one of the most exciting Kansas women’s teams of the past few decades.

They’re tough, they’re totally in sync, they have a heck of a lot of fun and they’re about as confident as any team I’ve seen at Kansas. They’re also the only Big 12 women’s team that has yet to lose. And in their two biggest tests of the season so far — a home game against SEC school Texas A&M and Thursday’s road game at No. 12 Arizona — they responded emphatically by winning 74-42 and 77-50.

Holly Kersgieter's a star. Zakiyah Franklin's a steady bucket getter. Chandler Prater has been called by KU coach Brandon Schneider his team's Marcus Garrett. And the rest of the roster features a perfect mix of tough, talented and tenacious players surrounding them.

It won’t do you any good to read about them here, though. The easiest way for you to get what I’m talking about is to go see it for yourself. And why not Sunday?

What better way to show your appreciation for this team’s recent rise — and Thursday night’s butt-kicking of Arizona — than by packing Allen Fieldhouse for Sunday’s 2 p.m. matchup with 8-1 Wichita State?

The Chiefs and Broncos play at 3:05 p.m. on Sunday, but take it from this lifelong Broncos fan that your entertainment value will be far higher at the Kansas women’s game.

If it’s watching the Chiefs obliterate the Broncos that gets you fired up, record it. Besides, aren’t you used to that by now?

Anyway, back to the Jayhawks.

These girls are legit and they can all play. They have big goals and an approach to the game that’s a perfect blend of have fun and let it fly and fight for everything you get. It’s easy and fun to watch them play, and they’re really just getting started. It’s nothing but good opponents and high-level games from here on out.

So why not jump on board now?

In all reality, 5,000’s the number. And if we’re being honest, that really should be the number of fans this particular Kansas team averages the rest of the way.

Nobody’s expecting 16,300 fans to pack the building like they do for men’s basketball games. Although, by packing David Booth Kansas Memorial Stadium for this football season, KU fans showed that they’ll respond to teams that win and programs that put a good product in front of them.

Why not keep that going? I don’t think you’ll regret it.

Absolutely, the women have earned the support. Besides, they put on an awesome show! If I lived in or around Lawrence, there's no way I'd miss a game. And, those prime seats that you can never get your hands on for the men's games are available for $5-$10 apiece for the women's games. Great seats in Allen, practically for free! Maybe they won't be packing the Fieldhouse just yet, but if the team ends up hosting rounds 1 & 2 of the NCAAW tournament, it could happen then. Chances are it's going to be ramping up throughout the season.

By the way, if you didn't see the game vs. Arizona, here's a link to the full game (condensed). https://www.youtube.com/watch?v=debSf30zVfo

One thing that might help is for this website to include the women's schedule, which it doesn't appear to have anywhere at this point.

It would also be helpful to list the next women's game at the top and not just the football and men's games.

Really. Shout out to the whole team & coaching staff! Compared to UConn, UTenn, they're not there yet. But they're getting there. Go watch the condensed game on youtube David posted above. This team is relentless. On both ends of the court. Defend, then attack, attack, attack. It's so entertaining. About time to be in top-20. Should be lots more fun to watch in person. ROCK CHALK!!!