With ESPN time slots there for the taking, Big 12 should get aggressive in pursuit of standing as college football's No. 3 conference 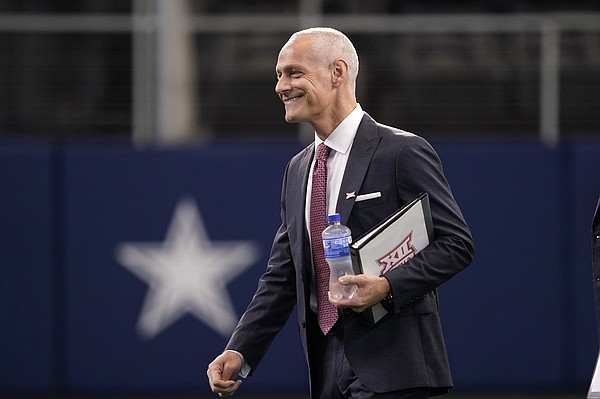 When news broke this week that ESPN had turned down a massive rights package offered by the Big Ten Conference — $380 million per year for seven years — my thoughts immediately turned to the Big 12.

Without the Big Ten in the mix for the first time in nearly 40 years, ESPN is going to need quality games and teams to fill a whole bunch of time slots.

And while that stands to be great news for the Big 12 and likely what’s left of the Pac-12 as well, the powers that be at Big 12 headquarters would be wise not to take anything for granted.

Rather than sitting back and waiting for ESPN to come to the Big 12 as a fallback solution when its next television rights deal is negotiated, the Big 12 should look for opportunities to be proactive in doing whatever it can to remind the network that not only does ESPN need the conference but it should want it, as well.

We’re still talking a few years down the road here, so there’s no need to scour this year’s schedules to point out the best games. But that time will come. And it can be addressed both by highlighting the best conference showdowns as well as by scheduling to create even more attractive options in the nonconference slate in the future.

If we’ve learned anything in the various rounds of realignment over the years it’s that the waiting game is for fools.

So fire up the full-court press to promote the conference’s media value. While the Big 12 might be locked out of top-three markets New York, Los Angeles and Chicago, it’s not as if Dallas (No. 5) and Houston (No. 8) are Dayton and Honolulu, which ranked No. 65 and 67, respectively, in the most recent Nielsen ratings.

Beyond that, in addition to adding Houston, the Big 12 also will be bringing in the 13th, 17th, 30th and 36th ranked TV markets — Tampa/St. Pete, Orlando, Salt Lake City and Cincinnati — when the four new programs join the conference one year before the current rights agreement expires.

That might not sound like powerhouse stuff. But nobody is pretending that the Big 12, on its own, can compete with the Big Ten or SEC in terms of market and media value any longer. On the field? You bet. And that’s another point for the Big 12 to drive home when selling itself to ESPN.

There’s no sense in leaving anything to chance here. Not this time around and not with the stakes as high as they are.

Just because most of the realignment headlines have involved college football’s power conferences, don’t think for a second that the so-called second tier isn’t constantly brainstorming ways to make itself more attractive in hopes of swooping in and collecting some of these mega millions that are now suddenly available.

Sure, it might not seem likely that the American Athletic Conference or the Mountain West have the sizzle to become a power conference. But it also never seemed likely for UCLA and USC to be in the Big Ten, did it?

There’s good football being played in those smaller conferences and we already have seen what the power of marketing, branding and exposure can do for a sport, a team or a conference. It might not be what it once was, but don’t underestimate ESPN’s reach and power.

I can’t imagine that new Big 12 commissioner Brett Yormark will do so, and, for that reason — and others — the Big 12 is likely to remain in a good position moving forward. Yormark made it clear during his introduction in July that he's agressive-minded and willing to wheel and deal in whatever realms are best for the conference.

That type of leadership and approach should benefit the famously reactive conference, and it would be wise for the Big 12 and Yormark to stay aggressive in how they act and think.

After all, the race for bronze is still on, and even though the conference that finishes third in the future power rankings won’t be anywhere close to closing the gap on the Big Ten and SEC, it could benefit a great deal from a similarly sized gap between itself and the conferences sitting in fourth and fifth.

Well, I doubt Missing the Mark is going to be able to fire up anyone with his cliche brand of speaking. Also its not about talking about how great the B12 is, when the only two teams to ever win a National Championship in Football are leaving. What tradition do you lead with when no one really has one in Football?

How many stadiums look like they were built decades ago? What is the selling point, we are a vintage conference in football?

Leave the snake oil fool out of this too! He is a joke. Mark the stain is not the best person to talk about a conference he has no idea what we are and can be.

You need to present a truthful, frank outlook, with timeframes during the contract, of when stadiums will be updated. You need to show how the B12 is reinventing itself. A vision of the future.

Take a note of what Lance our football coach has done in just over a year. He has created hope, solid recruiting stong transfer recruiting and what appears to be another step up from the bottom of the conference. Find out how he framing KU Football and copy it when you put someone like him, or him, in front of ESPN - on why the B12 is worth the money.

Let X marks the spot come in when the media contract needs signing and let him be in the photograph and claim he was responsible. When he gets bored living in the midwest we can thank him when he heads back East in a few years.

Agree with everything in this article - the Big 12 needs to be assertive.

All of a sudden, being geographically centered in the country has given us an advantage to expand with great schools and market sizes.

On a side note, I got a buddy who officiated a KU football scrimmage. He says we “still got problems”.

The Big12 is in a very reasonable position, though expanding with great schools is probably a bit over the top. Good schools? Sure. The great schools are basically gone.

I guess it comes down to, play an exciting brand of football and strive to compete @ the highest level and let the chips fall where they will.

If there are PAC schools that eventually defect to the Big XIi in the next couple of years.

Then, the Big XII Conference will be adding in those respective States as well to the viewership footprint as well.

Seems that the PAC is now in the poached zone (vs. being a Poacher).

How the tide has turned since the days when Colorado & Nebraska defected.

Michael - I agree, though also thinking about getting viewerships. In an old school sense, this was completely dependent on the decisions of the broadcasters. Which games are they going to show in which markets?

It seems that this goes out the window a bit with the advent of the various multimedia platforms. It is also why I think Yormark will help us remain solid, regardless of clichés. You can’t solve today’s problems using the same paradigms that created them.