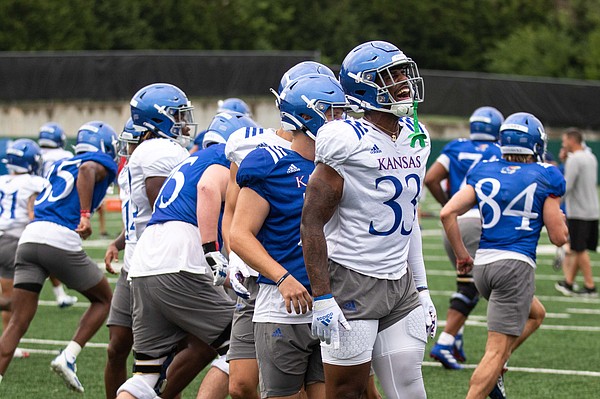 Polls are a pretty unscientific way to rank teams but they’re always good for sparking a little discussion.

That’s what made Monday’s college football coaches poll — the first one released for the 2022 season — interesting even for fans of a program as far down the line as Kansas.

No, the Jayhawks aren’t ranked. Obviously. Nope. And KU’s not receiving votes either. Of course.

But seven of the teams on the Jayhawks’ 2022 schedule are either ranked or receiving votes, and that’s a not-so-subtle reminder of the challenge that lies ahead for Lance Leipold’s Jayhawks in Year 2.

Oklahoma, which could be competing as a member of the Big 12 Conference for the final season, is the highest-ranked KU opponent entering the 2022 season. The Sooners landed at No. 9 in the first coaches poll of the season.

Baylor came next at No. 10, followed by Oklahoma State at No. 11. After opening the season with just one ranked opponent in the first six weeks, KU will play OU, Baylor and Oklahoma State in three consecutive weeks from Oct. 15 to Nov. 5, with the only bye week of the season mixed in on Oct. 29.

Texas, which, somehow, received a first-place vote in the poll, came in at No. 18 and Week 3 opponent Houston, which will be a nonconference game for now but soon will be on KU’s conference schedule, is ranked No. 25.

After that, Kansas State and Iowa State are both receiving votes.

That leaves Tennessee Tech, West Virginia, Duke, TCU and Texas Tech as the only teams on KU’s schedule who are not in the top-25 conversation this preseason.

If that doesn’t remind you how big of a challenge winning football games will be for the Jayhawks this fall, it’s hard to know what will.

While we’re talking about the future, it’s worth noting that fellow-future Big 12 foes Cincinnati (No. 22), BYU and Central Florida (both receiving votes) are also in the 2022 preseason conversation, as well.

A lot was made about the Big 12’s potential struggle to replace Oklahoma and Texas when the two Big 12 powerhouses announced their plans to leave for the SEC. But this year’s preseason poll, when considering the top 25 and teams receiving votes, features eight programs that will be in the Big 12 in 2023.

That’s the same number as the Big Ten and one less program than the ACC. It’s also three more schools in the mix than the Pac-12 has. Again, that’s not counting Oklahoma or Texas, which brings the future SEC’s total to 14.

That’s all as of today, of course. With conference realignment seemingly ongoing and conferences and television networks continuing to kick the tires on reshuffling the deck, that all could change and things could look completely different a year from now.

Either way, one thing is clear: the Jayhawks have their work cut out for them, and it will be no small feat if they’re able to start adding more wins to their record in the coming years.

It is a long climb from mediocrity when playing in a power 5 conference: the norm for KU since 2009. I give coach Leipold and his staff all the credit in the world for taking this monumental challenge head on. KU football is always at its best for fans before the season kickoff. I think I read somewhere that KU’s odds to win the Big 12 is +25,000. So, in the eyes of “experts” KU has one gargantuan uphill battle to become relevant again in the Big 12. One can only hope that most of KU’s games are competitive and that they can improve on last season’s win-loss record, which could be a challenge. I will be at the home games and hope others will show their support at Memorial stadium knowing it will be a monumental feat to turn around a football program as low as KU has fallen. It happened 90 miles West of Lawrence, so hopefully coach Leipold can resurrect. Rock Chalk.

I noticed NC State is No. 11. Too bad that coach wanted the KU job so bad that it turned off the former, former AD.

Also noticeable in the poll: Wake, Kentucky, Arkansas, Pitt, NC State......all in the top 25. None have any significant advantages over KU when it comes to recruiting or the potential to succeed. Yes, they may have a little more homegrown talent, but they all are competing with big-time programs when it comest to recruiting.

Leipold's approach reminds me of Mason. Coach L is using the connections he has, in the places he has them, to get players right now. The question will be whether he can establish a recruiting footprint somewhere, somehow for the long term. With three Texas schools still in the conference, Texas could still be in play. But a message has to be developed that resonates with 3-star kids who would like to come North. Or maybe you become the summer camp miners - finding the nuggets that others miss. It's a heckuva challenge.

Bottom line, life isn't getting easier on the football front. But we literally have the first fully competent football staff since the Mangino era. So there is hope. Looking forward to a much-improved season.

The task to rebuild is indeed challenging and continues to grow with adding 4 more teams that are regularly ranked or receiving votes. That being said it is helpful to note that when the Big 12 goes back to 12 teams (assuming we don't expand further and get even bigger), then the conference will likely have to shift back to divisions and we won't have to play every team every year and avoid this murderers row of 7 ranked teams.

When the Big 12 originally had 12 teams, we played 8 conference games (5 in division, 3 rotating cross division), so if that format is adopted again, we would drop a conference game and we would be able to pick up an easier winnable home game to help us get bowl eligible (assuming the conference allows us to go back to 8). Stating the obvious, those non-con games have to basically be guaranteed wins each year to jumpstart the season with 3 or 4 wins so we only have to win 2 or 3 games in conference to go bowling. Obviously from there, bowl games get us extra practices to develop our players, and increased visibility for recruiting, and so on and so forth.

This is the Bill Snyder plan that helped KState go from doormat to conference title contender. No, it is not a guarantee of those same results, but an extra win or two early in the season helps to not put so much pressure on getting 6 wins from the conference slate. We should never have a season where we're scheduling someone like Houston ever again. We need more games like Rutgers or maybe teams like Vandy or IU or Northwestern if we have to pull from major conferences to fulfill a scheduling mandate. But we should be scheduling teams that have finished in a similar position, sort of like how the NFL makes all the teams that finish first through fourth in the divisions play each other the following season.

As for this season, I think we should be optimistic to catch some teams by surprise and be competitive in most every game. 6 wins would shock the world, but I think we should shoot for 4 as a fanbase. That would be a major sign of progress given what the schedule.

It is a long climb TO mediocrity from where we’ve been.

So many positives from this coaching staff so far. Ultimately though, we need more Ws.

The flipside of having 7 opponents at least receiving votes is that there are 5 that are not. If we win the majority or more of those 5, and play competitive football in the others (upset?), we will be well on our way to getting back to where we all want to be.

Heck, Coach Leipold might even get some COTY recognition that he will quickly defer to the assistants and players.