Prediction time: My pick for the Kansas-Carolina showdown on championship Monday 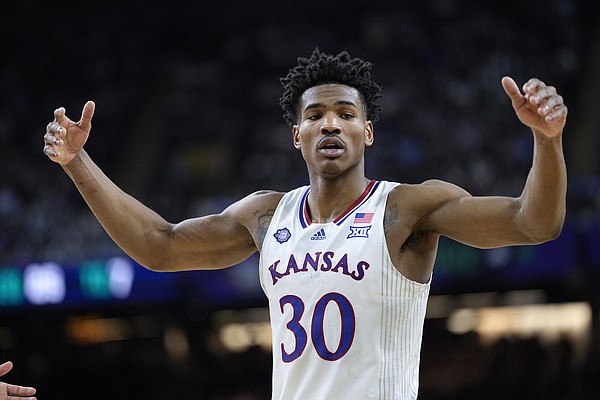 Kansas' Ochai Agbaji plays against Villanova during the second half of a college basketball game in the semifinal round of the Men's Final Four NCAA tournament, Saturday, April 2, 2022, in New Orleans. (AP Photo/David J. Phillip)

New Orleans — There’s a number of ways Monday night’s national championship game between Kansas and North Carolina can go. And it’s anyone’s guess how it will actually play out.

Here’s what we do know, though. Both teams are talented, confident, riding some serious momentum and ready to compete their tails off for the chance to bring home the trophy.

The top-seeded Jayhawks are favored by about 4 points in the eyes of oddsmakers in Las Vegas. KenPom.com sees it as an even bigger KU edge, with his predicted score at 80-74 in favor of the Jayhawks.

Nothing would surprise me in this game, but it feels, to me, like one the Jayhawks should and will win. The ankle injury to UNC big man Armando Bacot played a part in that thinking, but only in where I set the final score. A fully healthy Bacot, by my estimation anyway, would probably be worth another five or six points for the Tar Heels. So, if he were not injured, I probably would’ve put the final score closer to 79-73.

At 100% health, I’d give the edge in the Bacot matchup with David McCormack to the Tar Heels. But as it stands today, I think it’s a wash.

The backcourt is interesting both ways, with some pretty good defenders and confident shooters/scorers on both sides. I think KU’s depth and versatility in the backcourt is a little better than UNC’s, so I like Kansas to have the edge there.

That brings it to the other key matchup — Brady Manek vs. Jalen Wilson. This, in my mind, is the most important matchup in this entire game.

If Wilson is up for the task of sticking to Manek on defense, it’ll go a long way toward helping Kansas emerge victorious. He doesn’t have to be perfect. He doesn’t have to do it alone. But he does have to make Manek feel him and make him uncomfortable. I think he’s capable. And I’m willing to bet we’ll see the best defensive game of Wilson’s life tonight.

On the other end, when Wilson has the ball in his hands and turns the corner to get downhill, the advantage is clearly on the Kansas side. Manek is not known for being a great defender and if Wilson attacks him with the drive, while doing so under control and with poise and a purpose, it will either lead to easy buckets or Manek foul trouble. Both would benefit the Jayhawks.

UNC has its share of advantages. Caleb Love is a hard guard and is playing with crazy confidence — even on bad shooting nights. So the Jayhawks won’t be able to fall asleep on him and they’ll have to make sure they guard him for the full 40 minutes. If he gets loose, Carolina gains confidence.

Overall, though, I think KU has more options, more weapons and more versatility, not to mention the better defense. That doesn’t mean it will be easy. And they’re certainly going to have to play well. But if the Jayhawks show up as loose and locked in as they have looked throughout their time here in New Orleans, I can’t see any reason they won’t be in for one heck of a night.

What I worry about most is whether the refs let them play. Call it a tight game and it becomes who has the most foul trouble.