KU basketball, volleyball squads team up for a break from the grind and a few laughs 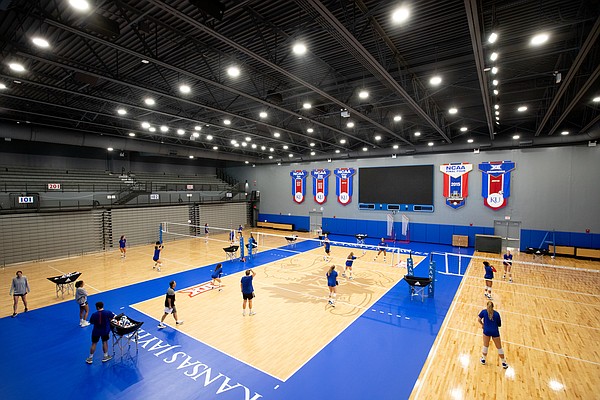 Two of the most successful University of Kansas athletic teams from the current school year got together for a little combined fun on Thursday, with the KU volleyball team and men’s basketball stepping into each other’s worlds for a brief moment.

Near the tail end of an offseason workout for both teams, several men’s basketball players and a chunk of KU volleyball players competed against each other in their specific sports.

For the hoops portion of things, the KU volleyball women showed off their shooting touch and picked up pointers from several current hoops stars.

On the volleyball court, the two squads scrimmaged, with the KU men quickly realizing that their athleticism and ability to play way above the net did not actually translate to success.

Still, from the videos and photos that surfaced from the fun, it was pretty wild to see some of the KU men soaring that high above the net.

Everyone knows what the men’s basketball team did earlier this month in New Orleans, bringing home the school’s sixth national championship with wins over Villanova and North Carolina at the Final Four. But some may have forgotten that the KU women’s volleyball team made a nice run of its own last fall, reaching the Sweet 16 before bowing out of the NCAA Tournament.

Both programs are a big part of what first-year KU AD Travis Goff said he hoped would be the standard for the department and the type of success that all of KU’s programs aspire to have.

But it was fun to see that, as much as they like to lock in and get serious on most days, both programs were able to take a little break from the regular grind to have some fun.

Truth be told, there was some surprisingly good form shown by players from both sides in the opposite sport.

Of course, it helped the KU men’s hoops team that it was allowed to play with eight players (vs. six for the KU women) and that one of them was volleyball assistant Billy Ebel, who kept things organized and could actually set a ball so the basketball guys could swing away.

According to two KU staff members who were there, the men's basketball team was spotted a 9-0 lead in the one official game the two teams played after a little warm-up time. And the KU women pulled out a 16-14 victory.

Here’s a look at some of the fun…

Pulled up to @KUVolleyball yesterday…

Think we’ll stick with hoops 😂 but we had a blast! pic.twitter.com/SSnfhqXuyj