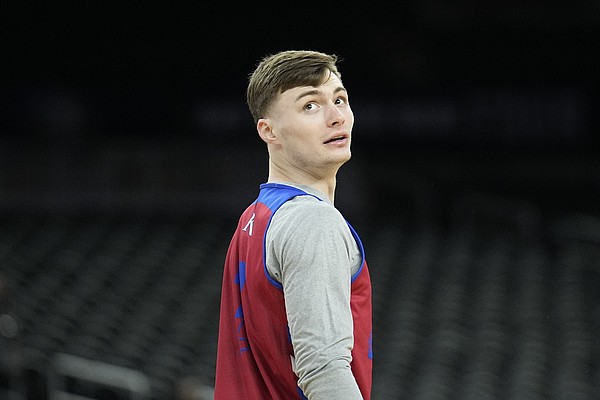 So now we know, officially, that Kansas junior Christian Braun is entering his name into the 2022 NBA draft pool so he can test the waters and go through the pre-draft process to see where he stands.

It may have been. But if history has taught us anything, it’s that these announcements always tend to sound that way.

They should. This could be it for Braun and Kansas. And if it is, it’s obvious from the announcement that he wants to make it crystal clear what KU meant to him.

Take a look back at Ochai Agbaji’s statement in 2021. In it, he wrote, “I’ll miss playing in front of you and but look forward to representing KU for the rest of my life and making you proud.”

Sounds an awful lot like “goodbye,” doesn’t it? And yet he followed it up by returning to KU and playing 40 more games.

The other reason these announcements tend to sound like the end is because that’s exactly what Kansas coach Bill Self believes they should be. For years, Self has said that anyone who enters the draft process to test the waters should do so full bore, fully intending to leave school and claim their place in the NBA.

That, Self believes, is the only way a player can truly give his best while auditioning for NBA scouts and going through the pre-draft combine and team workouts.

It’s after that when things get interesting. And Braun’s case will be no different.

His mind, for the next five weeks, will be fixed on doing everything he can to show NBA brass that he’s worthy of being drafted in the first round, perhaps even as a fairly high pick.

Several mock drafts have in in the middle to late slots in the first round, so he’s certainly starting from a good position. But those are mock drafts and the evaluation of actual NBA coaches, scouts and general managers will be much more telling for Braun.

In many ways, he enters this process in the absolute perfect position. For one, he’s got the talent to go make a splash. For two, he’s got the support of his family and KU’s coaching staff. For three, he has firsthand knowledge that, if he does not hear exactly what he wants to hear about his draft stock, he can return to KU for another season and set himself up for a heck of a time.

Agbaji showed him that. And while there certainly is no guarantee that Braun would do next season what Agbaji did this season, the idea that it’s possible and that it did wonders for Agbaji’s NBA prospects has to be comforting.

So now it’s all about the feedback. What it says. What it means. What he does with it. And how it helps him become a better player.

If the feedback is positive and lines up with what he wants and needs to hear, Braun will be gone.

If there are questions or doubts and the feedback points to holes in his game that scouts would like to see fixed, Braun could return.

It’s as simple as that. And as of today, even Braun doesn’t know exactly what the future holds. He will in five weeks, though. We all will.

So wish him luck, watch the ride and see what happens.

Here's a look at Agbaji & Braun's draft declarations for you to compare...

None by Christian Braun

He did not. Wilson did.

It seems like the NBA is all about finding a team that believes in you and will develop you through the learning curve. Braun has tons of potential and flashed this year in a lot of respects. Hopefully, if he stays he gets one of those teams. But hopefully he has a good feel and doesn't go the Dotson route. I wonder how much NIL money he could get by coming back plus if he can take an Agbaji-like jump if that'll get him into the lottery/mid-1st territory in 2023.

We could really use his leadership next year, especially after going from Doubting Thomas to gonzo in the NC game. There really isn’t another. Maybe Jalen could if he came back but doesn’t seem natural for him and definitely isn’t for Harris. Coach will get a transfer if there’s a spot available but can a new guy step in and be the lead dog? There will be so much young talent (& Cam) next year.

KU is going to have to work harder on the transfer portal due to the lack of talent in the 2023 and 2024 classes. Better start now.

I actually feel like KU is in a good position heading into next year roster-wise. Even if Wilson and Braun leave

It's not a national championship caliber team, but it's top 25 good at the very least. If Braun or Wilson come back, then they get even better.
We really need a another post player to have a nice rotation there. there are plenty in the portal.

Chad - There is a lot to like about the roster, but what it lacks is significant experience, especially at the bigs and wings. Coach will find experienced replacements if we lose one or both.