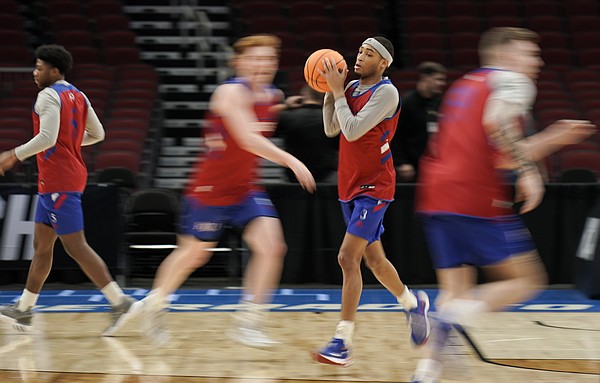 Kansas guard Dajuan Harris Jr. (3) moves through a passing drill during practice on Thursday, March 24, 2022 at United Center in Chicago. by Nick Krug

New Orleans — Kansas basketball coach Bill Self said earlier this week that he never even considered starting Remy Martin over Dajuan Harris Jr. because he liked the way Martin provided the Jayhawks with a spark off the bench and didn’t want to mess with a starting lineup that has been red hot.

While Self is the head honcho and gets to make all of those types of decisions, the fact that Harris and Martin have developed a closeness and appreciation for what the other brings to the floor made the decision even easier to make.

Now, with the two Kansas point guards bringing different things to the table for the highest seeded team remaining in this year’s NCAA Tournament, Self is ecstatic about the state of his point guard position.

“They’ve got a pretty good partnership going,” Self said on Friday, a little more than 24 hours before his Jayhawks (32-6) face Villanova in the Final Four at the Caesars Superdome.

A big part of the reason they do is because of the way Harris has handled sharing the role. Earlier this season, with Martin both struggling to adjust to Kansas basketball and fighting injuries, Harris was routinely playing more than 30 minutes per game.

Since Martin’s breakout, which coincided with the start of the postseason, Harris has seen his average minutes played dip to 23 minutes per game, with him and Martin each roughly playing half of the game.

There have been times when the two have been out there together. And, when the matchup is right (which it won’t be versus Villanova) Self still likes the idea of putting those two on the floor at the same time. But regardless of who plays when, Self said the whole thing has worked because of the attitude Harris has had about sharing the role.

“He didn’t care,” Self said of Harris. “Juan is having the time of his life. He’s a remarkable young man and for anybody to go through that much hardship and family tragedy, it’s truly incredible that a guy of his age could handle it as well as he has. So Juan could care less. And I’ll be candid with you, Remy may care, but he doesn’t care much either.”

Both players want to play as much as they’re needed and win above everything else.

“There is one thing about Dajuan Harris that everybody has learned this season,” KU junior Christian Braun said on Friday. “He’s just a winner. All he did was with at (AAU program) MOKAN. All he did in high school basketball was win. So, the one thing that has been true in Dajuan’s life is he just wins. So, how has he handled it? It doesn’t even affect him. You wouldn’t even notice. Remy’s done great. He was the Most Outstanding Player of our regional and Dajuan doesn’t bat an eye at it.

He continued: “If Dajuan doesn’t play a minute, he would be just as happy as if he played every minute. He’s grateful to be here and, obviously he is competitive and wants to be in the game, but he knows whatever lineup we go with, we also know Dajuan is not going to pout. He’s the biggest cheerleader for everybody. He’s also competitive and wants to be out there, but he’s just a winner and will do whatever it takes to win.”

One of the biggest reasons the partnership has worked is the fact that Harris and Martin — like everyone on this roster — genuine like each other and enjoy playing together.

“It’s great,” Harris said Friday. “Last night, Remy was in our room talking — me and CB’s room — he be coming in there sometimes on away games and it’s great. It’s fun playing with him. He gives us a lot of energy and it’s just fun being around him.”

Harris, Martin and top-seeded Kansas (32-6) are slated to tip off against No. 2 seed Villanova at 5:09 p.m. Saturday in the first of two national semifinals. Duke and Carolina will play afterwards and the winners will meet Monday night for the national title.