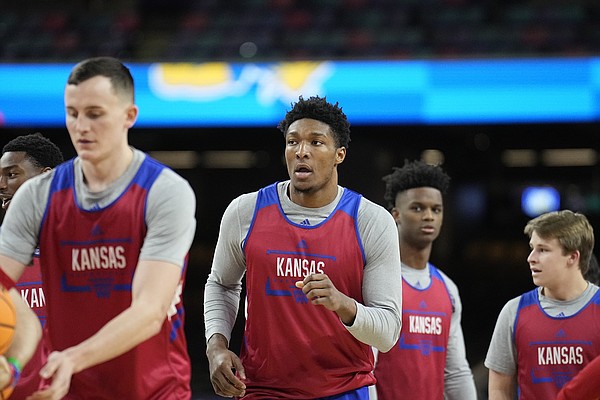 New Orleans — A lot has been made about Ochai Agbaji and Remy Martin getting to a Final Four or even Mitch Lightfoot returning to one.

But there’s another Kansas player who has gone through as much as any of them to be here this weekend.

His name is David McCormack and he has the utmost respect of KU coach Bill Self for making it this far.

The reason? As he battled the lingering effects of offseason foot injury, which has kept his right foot sore for most of the 2021-22 season, McCormack could have folded or made excuses or explained that he simply could not go.

But he never did. Instead, he sucked it up as needed, worked twice as hard to stay fresh and ready and continued to make himself available night in and night out for the top-seeded Jayhawks.

“I think we've had a ton of guys that want it and their preparation is great and everything,” Self explained this week. “I think I probably respect David's prep more than most because guys, if we practice at 3:00, you show up at 1:30, you get taped, you go to weights, you practice, and you go home. With David, (we) practice at 3:00, weights at 2:00, (and he shows) up at 11:30 to get treatment and do all the things that he’s doing probably six days a week, seven days a week. Just so he could go to practice.”

All of that has resulted in the senior forward from Norfolk, Virginia averaging 21.5 minutes per game and playing a key role for the Jayhawks as a full-time starter and half of the answer at the 5 position.

There have been plenty of times this season when it has been obvious that McCormack’s foot has been bothering him. Sometimes that fact has had a major impact on his ability to be effective on the floor. Other times, it has been something he has merely pushed past to do whatever he could to help this team win.

“His prep work for opponents is probably very consistent with others,” Self said. “But what he has to go through to put himself in a position to play, I can't help but respect that a ton.”

Although he has talked about the effects of his foot injury even less than his head coach, McCormack shared some of his appreciation for his ability to power through the injury and soreness this week while leading up to Saturday’s Final Four clash with Villanova at 5:09 p.m. on TBS.

McCormack called the entire journey “crazy” and said simply, “Look at me now; I’m at the Final Four,” when he was asked about coming back from the foot injury he suffered late last season.

“It’s been a journey and it’s definitely been a time of ups and downs,” he added. “There has been frustration. There has been celebration. I would not have (wanted to go) through it with any other team or with any other coaching staff. These are the right people to have in your corner. That’s all I can really say. It’s a great feeling.”