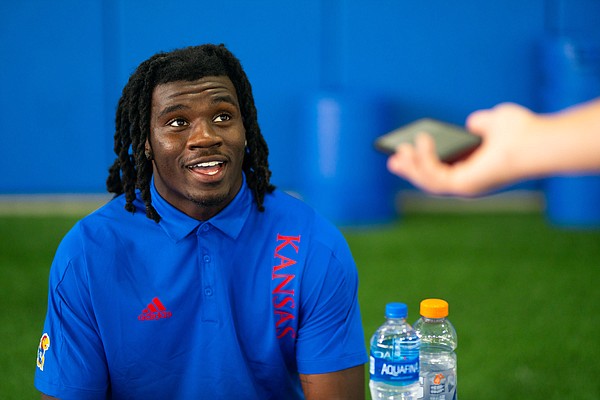 For most of the 2021 Kansas football season, one question weighed on my mind more than any other.

On Sunday, mere hours after the Jayhawks’ stunning, 57-56 overtime victory at Texas, one video may have answered it.

The question: No matter how qualified or “right” first-year KU coach Lance Leipold is for the monster challenge that is coaching football at Kansas, how is he going to get his most talented players to stick around through a treacherous rebuild when the rules allow any of them to leave for perceived greener pastures at any time?

Any time that question entered my mind, my thoughts immediately went to junior safety Kenny Logan Jr., a talented and tough player who no doubt could play for just about any program in the country.

Logan’s had a great year. He leads the team in tackles, heart and personality and has been one of the true bright spots in another losing season.

There’s little doubt that Logan has enjoyed his time as a Jayhawk. But in the three years he has been with the program, the Jayhawks have won just five games — four heading into last Saturday — and been on the wrong end of so many lopsided outcomes.

There’s not a person around the KU program who would not love to see Logan finish his career in crimson and blue. But after recent drubbings at the hands of Iowa State, Texas Tech and Oklahoma State — not to mention a never-in-it loss to in-state rival Kansas State — I started to wonder if Logan himself would want stick around for his senior season or if he’d go the way of Marcus Harris, Da’Jon Terry and Karon Prunty, who all entered the transfer portal in search of a new opportunity after last season.

The idea of trying to rebuild a college football program from the ground up in the transfer portal era makes it a far tougher challenge than anything anyone has ever seen. Being successful will have to be as much about relationships as it is X's and O's.

The video is just 20 seconds long, but it features a special moment between Logan and Leipold, who are shown embracing and soaking up last Saturday’s victory.

“I love you coach,” Logan says.

“I love you, too,” Leipold responds.

“I appreciate you,” Logan adds.

“I appreciate you,” Leipold replies.

The two then share their thoughts about how the win over Texas was merely a “small step” in KU’s turnaround, with Logan calling it a “stepping stone.”

“It’s just the beginning,” Leipold adds. “Now, I’ll give you a little warning; I’ll be harder on you next week than I was before. I love you, man.”

It’s that kind of bond, between a player and coach, that can make this rebuild possible.

Those two have been around each other for barely six months, and during several of those weeks, the bitter taste of losing has been the story. But Logan and Leipold have clearly developed a deep connection, and their willingness to keep grinding and trust one another led to the win over Texas.

“Kenny’s got such great personality and charisma,” Leipold said earlier this month. “He’s such a likable person and he connects with so many different people. That’s the thing that’s impressive. That’s just what he’s about. His passion for the game, and for our team to be successful, is really there.”

The strength of their relationship surfaced early, with both Logan and Leipold first sharing their respect and admiration for one another back in July and August. They’re opposites in many ways, but both are brimming with energy, optimism and a relentless spirit.

That made their bond click quickly. Their ability to show up week after week with a smile on their faces and the passion to lead others to do the same has strengthened it and this team.

Earlier this month, I asked Leipold about the importance of Logan’s role in KU’s rebuilding plans, and the first-year KU coach did not hide his perspective.

“(KU strength coach) Matt Gildersleeve and I have talked a lot with him (about) how he’s viewed and what (his) role is and what that does for our program, now and for the future,” Leipold said. “I think he’s starting to understand that more and more and embracing that.

“He is a key component (for) the rest of this season. He will be very important during the offseason and the continuation of building our program.”

Logan’s talent and leadership factored into that answer. And Leipold said Logan, as much as anyone, has shown constant growth throughout what has been another tough season.

He’s always showed up to compete. But in the past month or so, he has started to understand more about Leipold’s approach. He also has become more comfortable in KU’s defensive scheme and that has allowed him to play faster and make more plays.

Others have done that, as well. And Leipold and company are counting on enough current players making those strides to get this thing turned around.

What they weren’t counting on, though — and didn’t even know they had when they arrived — was a player like Logan to lead the effort.

Win or lose, on good days and bad, Logan presents himself as a player and a person who simply loves being around football. That kind of attitude can become contagious, and when you get enough guys thinking and acting that same way, that’s when big strides can be made.

“I think he’s kind of special in that way,” Leipold said. “He’s always around the building, he’s always around people that are in this organization. He would rather be in this building than sitting in his apartment.

“I don’t know if Kenny would like a lot of Kennys around him, though,” the coach added with a laugh. “I’m joking.”

Man I hope Logan goes into coaching. He's a real leader from what I've read. Wish we had more like him.

I hope he sticks around. Rebuilding is tough from a player perspective as sometimes you go unnoticed. But on the other end, transferring to a new place, where you have to develop and cultivate relationships not just with your coaches but with your community and campus, is not easy either.

If I had to take the over/under, I think he stays.

And for what it is worth, they have two games left, both are on the table to snag. Both TCU and WVU have been inconsistent. KU could finish as high as 7th place if they win out in coach's first year.

That we are even talking realistically about that this early is a good sign.

Funny what an upset victory can do. We were dead, and now we are talking about 7th place?

My my my. Fact is though, that Coach Leipold will not take Jason Daniels redshirt away, unless he has too. That is just not the way he rolls. He thinks program, not games, and that's the way it has to be. If Jason Bean is unable to play, then you do what you have to do.

So neither game is winnable with Bean? I get your pessimism, but neither TCU nor WVU has played consistent football at all this year. There is a reason they are down there at the bottom with UT and us.

Matt, I'm still kind of confused. I was thinking the transfer portal was only temporary because of Covid, and after that it would go back to players having to sit out one full year if they transferred. What's what?

Kenny Logan is the kind of person I wish I had the opportunity to know personally and not just through the media and games.

Anyone know where Prunty is? I know he went to South Carolina and quickly back to the portal but I can find nothing about him since then. Nothing. Anyone know?

I had forgotten about the COVID year extension. Daniels starts Saturday, guaranteed.

Reading about Fuente getting fired, and appreciating again how wise Goff was to find his coach off-cycle. Right now, before the carousel has really even started to spin…

All are open. Would we have competed with any of these teams for a coach? Not even remotely close.

But that’s not it. If Aranda heads to USC, then Baylor is open, and so on down the line. KU would be pretty far back in the line to even get on the ride.

Goff made a brilliant move by getting his guy early. As far behind as we are now on things, imagine if we had put an interim guy in?

Dale - I was thinking the same thing about Prunty. I’ve heard bits about Parchment at FSU, and read an article about Harris and Terry transferring, but really nothing about any of the other transfers doing anything at their new homes.

Layne - I’d question your analysis of Coach Leipold. Definitely agree that he is about building the program and not concerned about individual games.

At the same time though, this is a guy that has repeatedly gone for it on fourth down and in some of the most improbable field positions (see ut 4th quarter). This is the guy that knew before overtime even began that he was going for 2 and the win. He’s not going to be half-azzd now for something later. He’s going to give maximum effort now, whether that’s Bean or Daniels.