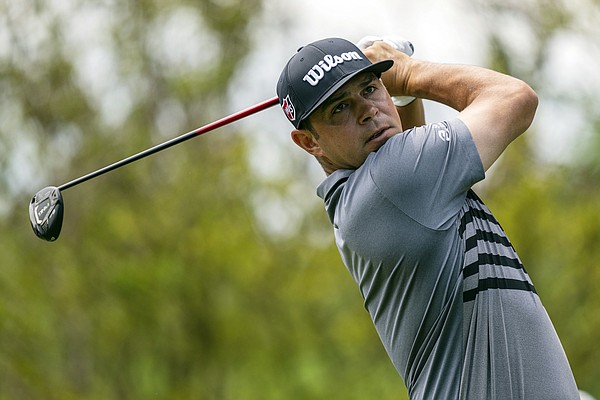 Gary Woodland watches his tee shot on the second hole during the third round of the Wells Fargo Championship golf tournament at Quail Hollow on Saturday, May 8, 2021, in Charlotte, N.C. by AP Photo/Jacob Kupferman

A third consecutive below-par round on Saturday at Quail Hollow has former University of Kansas All-American within striking distance at the Wells Fargo Championship in Charlotte.

After entering Round 3 in a tie for the lead, Woodland shot a 1-under 70 on Saturday and, at 7-under for the tournament, sits two strokes behind leader Keith Mitchell heading into Sunday’s final round.

Woodland ended Saturday in a second-place tie with Rory McIlroy, who was a popular pick to win the event entering the week.

Woodland led by himself for most of Saturday’s round after carding three birdies in his first 10 holes. But back-to-back bogeys at 13 and 14 dropped him out of the lead. Mitchell shot a Saturday-best 5-under in Round 3 to climb to the top of the leaderboard.

Woodland got one of the bogeys back with a birdie-2 at No. 17 and he followed that up with a par at 18.

Woodland’s tee shot on the 138-yard 17th hole landed inside of five feet from the cup and gave him an easy look at birdie. That helped make up for the missed 9-footer on 13 that led to bogey.

Woodland also missed a 5-foot putt for par on No. 14 before he regained control of his short game.

As the leader after 36 holes, Woodland played in the final group of the day on Saturday. He’ll be in the second-to-last group during Sunday’s final round. He'll be paired with Luke List (-6) in the group that goes off at 12:30 p.m. Mitchell and McIlroy will play right behind them, teeing off at 12:40 p.m.

Woodland is looking for his first PGA Tour win since winning the U.S. Open in June of 2019 at Pebble Beach.

The 2007 KU graduate has recorded 11 top-20 finishes — 7 in the top 10 — since winning his the first major championship of his career.

None by PGA TOUR