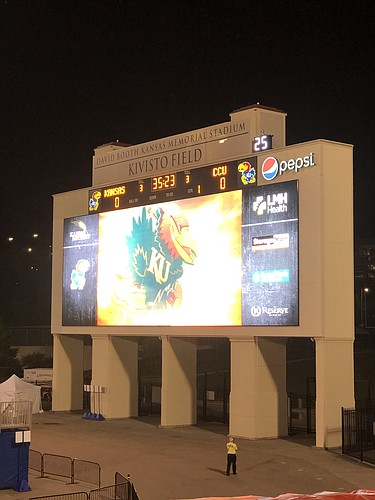 The clock on the video board at David Booth Kansas Memorial Stadium counts down to kickoff before KU's season opener against Coastal Carolina on Saturday, Sept. 12, 2020. by Matt Tait

Throw another big name in Kansas Athletics history behind KU alum Mike Harrity as a candidate for the Jayhawks’ open athletic director job.

“KU needs a Jayhawk as the new AD who has an elite level of broad experience in college athletics,” Manning tweeted on Turesday. “Mike Harrity is what WE need.”

Manning continued: “As an alum, Mike shares the same pas-sion and will invest the energy to restore Kansas Athletics to what it needs to be – humble/hungry as we strive for excel-lence in all that we do.”

Harrity grew up in Kansas City, Kan., and earned a journalism scholarship to KU, where he became the first person in his entire extended family to graduate from college.

After graduating, Harrity worked in KU’s athletic department for a handful of years and was responsible for developing, co-ordinating and executing the Kansas Athletics staff’s commu-nity involvement, outreach and relationship-building while also heading up relationship-building and outreach to former stu-dent-athletes who have achieved success in professional ath-letics and business. After leaving Kansas, Harrity spent several years as an Asso-ciate AD at Notre Dame, where he started in 2011.

In 2017, Harrity was selected as one of 25 senior-level athlet-ics administrators from across the country to participate in the NCAA Pathway Program.

The year-long program is designed to prepare those currently in senior-level positions to gain insight into every facet of an athletic department, preparing them to become well-rounded leaders who are equipped with the tools an effective athletic director needs.

He also has been involved with Army’s plans to embark upon a major capital campaign to enhance Michie Stadium and as-sisted with the administration oversight for Army Football in addition to serving as a sport administrator for other varsity sports teams.

Throughout his career, Harrity has worked in college athletics programs in the Big Ten, Big 12, ACC and Patriot League.

Here's a quick look at some of the latest chatter I've heard about KU's AD search:

• The Journal-World has learned that well-known search firm, TurnkeyZRG, will assist Kansas in its search for a new athletic director.

• Multiple sources have told me the process is moving fast — perhaps even faster than expected — and that KU Chancellor Douglas Girod's March 10 timeline of making a hire "within the next few weeks" is still in play.

• As of last Sunday, it was still too early to consider any candidate the leader.

• A couple of names worth adding to our original list include: Travis Goff, Deputy AD at Northwestern; Missy Conboy, Senior Deputy AD at Notre Dame; Mike Bohn, a KU graduate who is now the AD at USC; and Mark Alnutt, the current AD at Buffalo.

(2/2) As an alum Mike shares the same passion and will invest the energy to restore @KUAthletics to what it needs to be - humble/hungry as we strive for excellence in all that we do. RCJH!! @dennisdoddcbs @JayhawkSlant @Matt_Fortuna @GaryBedore @mctait @CJMooreHoops @PeteThamel

I'm good with Harrity. Now give the interim football coach a 4 year contract as head coach, there is no need to waste time and money looking for someone else. We could do (and have done) a lot worse than Emmett Jones. He deserves a chance, let's roll the dice and hope he coaches as well as he recruits. I'm betting he can coach and run a program.

You mean the resume that looks exactly like David Beaty's.

Jones is a proven good recruiter. Beaty was "thought" to be a good recruiter (and that was when he was at where, TT? - a place that's a lot easier to recruit good Texas foot ball players to than KU).

If it’s Harrity, then the hope would be to get Monken.

A running based coach in a league known for its passing. I wonder if that would be good for the WR that we just signed?

Gentlemen I think we get ahead of ourselves, if Harrity is any good, he is not going to be manipulated, he will do his job, and do what he genuinely feels is best, and we will have to support that. I am still not sure that Mr. Jones is really ready for the job. Clearly he would have the support of at least some of the players, but that is not what you do as AD, you don't ask for a referendum, you have to make the call.

First, Harrity wouldn't be in his current position if he wasn' qualified and good at what he does. Long was qualified and supposedly good at what he did, but, apparently Long let his position and his good ol'boy network influence his decisions. Hopefully there is nothing in his past that is sordid or controversial that can embarass Harrity or the University of Kansas or can be used to stabe him in the back with.

More iimportantly, will KU provide and environment where he can be successful. IMO, Harrity is a Jayhawk and there is no question about where his heart and his motivation for what he wants for KU. But it's hard to be successful when you arrive and then find out your hands are tied.

I’m excited by Danny’s endorsement and by Harrity’s resume. I love that he is a KCK guy, that he’s a j-school guy and an MSEd.

Something tells me that things are already in the works behind the scenes and maybe all that is left is the due diligence. Just a feeling.

If we are to get Monken, we need someone with enough backbone to make that choice. Too many ADs are afraid of the perception from fans. Paul Johnson worked out pretty well for GaTech. I think that Monken could have even more success here because I think he is even a better coach than Johnson.

KU has almost no football tradition. Yet we act like we are above running the triple option. It’s time to quit swimming upstream and do something smart for a change.

Good points. The only thing I disagree on is "Too many ADs are afraid of the perception from fans" part. I don't think the fans have that much influence. IMO, Too many AD's are afraid of the donors and their opinion! Someday I woud like to hear what Mark Mangino has to say about the role donors played in his firing. I have my opinion why Mangino was fired and it is not because he was rough or ridiculed some player. If justice were the only consideration, KU should admit they were wrong and hire Mangino back. But, IMO, KU is drowning in a pool of cancer culture created from melting Snowflakes and unless a new AD, or someone above the AD, puts their foot down, KU will never ever get over the hump with the football program.

Exactly Brian. I assume you meant to type "cancel" culture, Or "woke" culture, whatever you call it, KU is infected with it and our athletic department will remain a clown show until someone stands up to the pc crowd.

We are in a league that is known for its passing, for its RPO, I realize that OU ran the triple option to championships, but there have been a lot of rule changes and upgrades in offense and defense, that have led to the demise of that offensive scheme.

How about "Mike Bohn, a KU graduate who is now the AD at USC"? Has similar credentials plus a current AD for a power 5 school.