What we learned from Ochai Agbaji's showing at the NBA combine 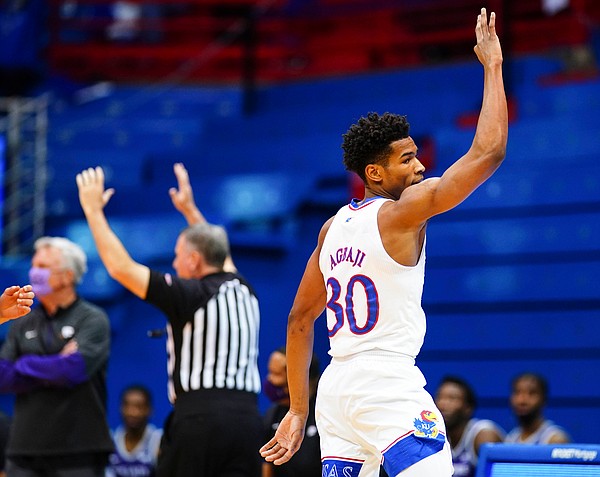 Kansas guard Ochai Agbaji (30) celebrates a three during the first half on Tuesday, Feb. 2, 2021 at Allen Fieldhouse. by Nick Krug

KU senior-to-be Ochai Agbaji has a tough decision to make, and the biggest factor in that decision became crystal clear at last week’s NBA combine in Chicago.

When it came to testing, drill work, measurements and looking the part, Agbaji showed that he is very much a draftable NBA player.

However, when it came time to run up and down and play five-on-five basketball, Agbaji’s weaknesses stood out a little more.

The question he has to answer is whether he wants to work on those weaknesses at Kansas or in the NBA’s G League.

One will pay him to do it and provide as much time as he needs day in and day out to work on his game.

The other will give him better national exposure and the opportunity to grow his game and build confidence against younger players.

Agbaji’s a smart kid and a smart basketball player. And he’ll make the best decision for himself. After all, only he truly knows what is most important to him at this point in his basketball journey.

Regardless of what he decides, Agbaji’s focus likely will be the same in the months ahead — improve his ball handling, get better at scoring off the dribble and become more assertive.

But therein lies the dilemma.

At the NBA level, the Kansas City, Mo., native appears to be a classic 3-and-D player in the making. If he returns to KU for one more run, he’ll be much more than that.

So, can the two styles co-exist?

As long as the Kansas roster looks this fall like it appears it will today, the answer is absolutely yes.

Remember, Agbaji was essentially that as a sophomore, when he played alongside All-Americans Devon Dotson and Udoka Azubuike. While those two carried the load and got help from Naismith Defensive Player of the Year Marcus Garrett, Agbaji filled a smaller role.

That role was to play defense, make open shots and be reliable. He did all three of those things at a high level and, quietly, was a big reason that team finished 28-3 and was projected by many to win it all before the 2020 NCAA Tournament was canceled.

Those three other guys are long gone by now, but there’s no reason to think that Arizona State transfer Remy Martin at point guard, senior big man David McCormack down low and even Drake transfer Joseph Yesufu as an attacking guard on the perimeter can’t fill their roles and open things up for Agbaji.

It might seem strange for a guy who was the program’s leading scorer one year to actively and purposefully take a step back the next. But that could wind up being the best thing for Agbaji’s pro future.

Although he has shown flashes of being able to assert himself offensively during his first three seasons at KU — and certainly did plenty of that in high school — he is not the kind of player who is going to be asked to get to the rim off the dribble and create shots for himself in the NBA.

If he can showcase his 3-and-D talents and improve his ball handling and ability to get to the rim when the moments present themselves — in transition would be the best place to do that — he will improve his draft stock and enter the pre-draft grind in 2022 in much better shape than he’s in today.

If he improves more than that, his stock soars and his path to being drafted becomes even easier.

The talented and charismatic guard has a tough call in front of him. And he has until July 7 to make it.

His handles are the key.

If i remember correctly, Agbaji was going to red-shirt. This usually means that they need some time to develop and historically very few red-shirters actually make it to draft status (not saying it doesn't happen).

When the opportunity to play happened, Agbaji stepped up and now is one of the focus members of our team. There are clearly gaps in his current game still and if drafter, I don't believe he would walk into a team's locker room and command the ball or even see much playing time.

I think it has correctly been assessed that he is either a KU and develop or a G Leaguer and develop for a year or two.

I have two perspectives to add, but they are more of a fan and just thinking out loud: 1) If Bill Self has clearly helped you develop and if he will continue to help you develop the skills identified by the combine, then to me this should be a fairly easy choice. If there are things that you don't think Bill Self can aid you with and the G League affords you that skill development, then it is still an easy choice.

2) However, once you go to the G-League your time starts clicking, you rarely see more than a 1 to 2 year process at the G League. That opportunity will be there again next year. If you take the KU route, it buys you one more year of development and the next year as a G Leaguer with little room for failure to get to the same point. In fact, based on coming in as a red-shirter and taking full KU experience and a year or two in the G League, this would afford you the most training for a successful career. If you take the G League this year and an injury or poor performance there, you are done. With another year of success at KU it will buy you more time in the G League.

Either way if you don't make it, talk to Langford, he has shown how a successful player can make a lot of money as a top professional overseas.

How many years does it take for Ochai Agbaji to be able to dribble a basketball?

Dribble a basketball or dribble at an nba level?

My guess is even the walkons would emphatically handle most of if not everyone here.

Just a thought, but another benefit Ochai would get from another year at KU would be an opportunity to graduate from KU. A degree is still worth something in this world and it would be something nobody could take away from him. Sooner or later, his playing days will be over, and I would like to think the degree and the knowledge he would gain from attaining it will help him in his future career, whatever that winds up being.

The culture has changed. I used to think that staying at a place like KU instead of jumping early would be a bigger benefit. I am not sure that's the way the basketball universe works anymore or maybe it never did. With all of these leagues made to "develop" talent, which is sarcasm if you couldn't sense it. There are too many opportunities outside of college now and they all pay money. With risk of injury, maybe a roster too talented to get the focus they want and other factors to think about....... these players are jumping ship early. The problem is that I think it has made the NBA more of a street ball game and more about the studs than it has ever been. There isn't enough time to develop up there unless you are just Elitely gifted. You pretty much have a year or two max to prove you belong in the NBA and you better not be too old or they will draft someone younger that MIGHT turn out to be better than the kids who have honed their craft and stayed in school. It's a vicious grinder that unfortunately chews up and spits out many more players than it used to. I hope whatever Och decides that he is successful and happy, he seems to be a great person and has represented our University well. RCJH

Until you can DOOOOOOOOOOM-i-NAAAAAAAAATE the boys...why oh why would you subject yourself to the NBA MEN. We have seen so many big face NOOOOT ready for NBA players leave early only to MARGINALIZE themselves forever. Your only ever going to get one shot...take your best shot...or see you on the ALUM squad. The ALUM team is a fat squad but there is always room to squeeze you in the picture. SMILE! Good luck.

Since he has returned players now can earn money. I'm thinking he will get a chance to do that.